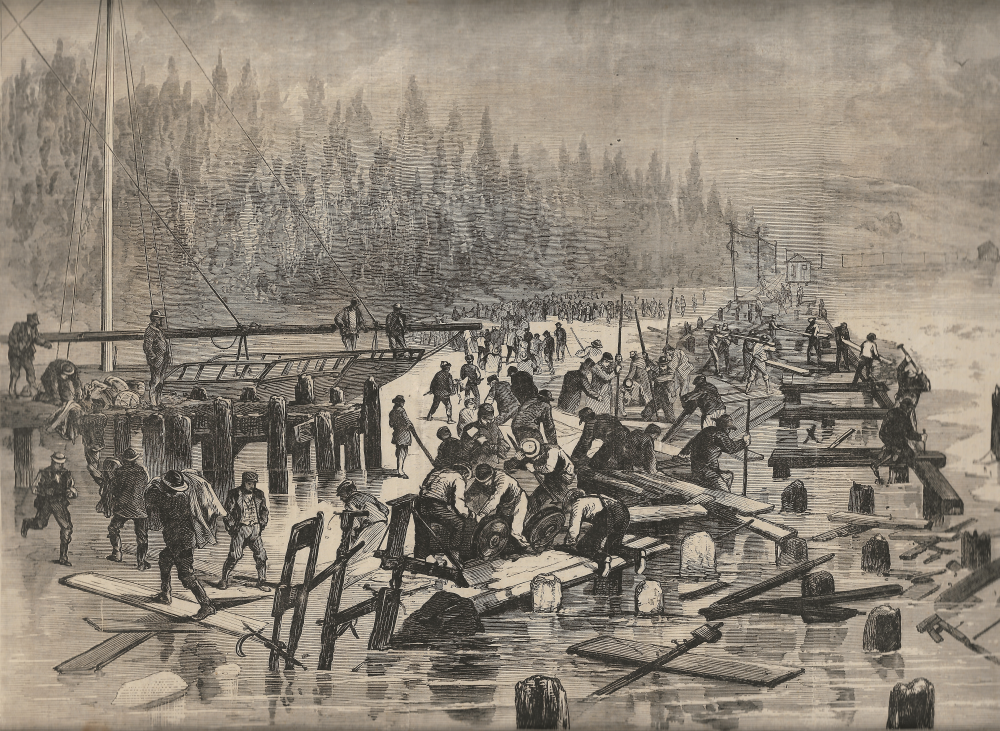 In this print from an 1871 news story, workers recover bodies from Wappinger Creek after a collision between two trains.

A broken axle caused a 25-car freight train laden with oil to overturn on the bridge between New Hamburg and Beacon, where it was hit by a northbound express train. The first two cars of the oil train and drawbridge caught fire and the structure collapsed, dropping the cars, the express locomotive, a passenger car and a Pullman’s sleeping car into Wappinger Creek. There, the oil and flames spread over the ice. By the next evening, 22 bodies had been recovered. The passenger train had been running 12 minutes late; had it been on time, it would already have been at the New Hamburg station when the oil train crossed the bridge.

Jonathan Deyo, a Newburgh lawyer, was mugged near the Matteawan asylum for the criminally insane after visiting two clients there. He said one man pushed him against a fence while another rifled his pockets, taking $30 in cash, a gold watch and a diamond scarf pin.

Inmates at the Matteawan asylum presented a minstrel performance for firemen from Fishkill and Matteawan to thank them for putting out a fire at the facility. But sitting in the front row were the train robber Oliver Curtis Perry and notorious killers such as Lizzie Halliday and Quimbo Appo (“the Chinese devil man”).

Matteawan police officers stood guard outside the Glenham home of Lt. Clarence Lang and his new wife after its occupants received threatening letters. Eliza Sloane, the housekeeper, said notes addressed to her or Mrs. Lang began to appear pinned to trees after armed, masked men approached while Eliza was alone at the home and stole $1,000 in silverware. Miss Sloane remained at the home while the Langs fled to Boston. Eight days later, after the officers had left, Sloane said a man approached to explain that he had been trying to scare her away and that his target was Mr. Lang. A suspect was quickly identified: Frank Carey, a teenager who formerly worked for the couple until he was arrested for stealing. He had been seen with a man who matched the description of a spurned boyfriend of Mrs. Lang.

A well-dressed woman who said her name was Mary Pette and that she was 56 and lived in Matteawan became faint on a street corner in Brooklyn and was taken to a hospital. Four hours after being discharged, she was picked up a short distance away, saying she had severe head pain. This time she gave her name as Mary St. John.

The Fishkill and Matteawan Railroad announced its net earnings in 1895 of $5,559.13 allowed for a dividend of 2.5 percent.

A judge in Connecticut granted bills of divorce to the two husbands of Jeannette Smalley, who had been detained in Matteawan on bigamy charges but escaped from the Danbury officers who retrieved her.

Two juniors at Poughkeepsie High School traveled to Beacon to obtain a marriage license, then eloped to Cleveland. The next morning, when students arrived at the school, they found a cartoon on a blackboard showing a young couple dragging a trunk. The Beacon city recorder recalled that the couple looked too young for a license and referred them to Judge Ferdinand Hoyt, who demanded they sign affidavits stating they were Beacon residents and legal adults. The girl stated she was 18 and the boy swore he was 21. It was not clear if they had been married since the judge said he did not perform a ceremony before they left the city.

A laborer narrowly escaped death when he was buried up to his neck during a sewer excavation.

Operations resumed at the National Biscuit Co. after 300 workers accepted a new contract after an eight-day strike. The gains included a closed shop (where every worker must be a union member) and wage increases of 10 to 70 cents per hour.

William Langer spoke at the Beacon Hebrew Alliance on Jews in Texas.

The Brewer building at 198 Main St. was razed to make room for a modern diner owned by Joseph TenEyck.

Two brothers, ages 16 and 20, were sentenced to 30 days in jail for punching their neighbor on Beekman Street.

Henry Sheldon, who ran a drugstore in Beacon for 23 years at Main and South White streets, died at age 70.

The police were called after the doors of the Beacon High School gym were chained shut with about 650 people inside to watch a basketball game between Beacon and the Newburgh Free Academy. Coach Bill Ham said he chained the doors to prevent 350 more fans from getting inside the packed gym. The principal said that while some people expressed concern the coach had created a fire hazard, had there been a fire, spectators could have run through the building to other doors. He said that while the coach had probably prevented a riot, “the chains will not be used again.” Beacon won, 42-38.

Attendants at the Matteawan State Hospital for the Criminal Insane asked the state to reclassify them as prison guards.

A Poughkeepsie basketball team, Francisco’s Merchants, protested its loss to Beacon in a city league game because the visitors arrived 35 minutes late.

Following an 11-inch snowfall, Rundle Gilbert was able to open a new, mile-long ski run on Mount Beacon that he billed as the steepest and longest south of New Hampshire. The run dropped 1,200 feet and the slope at spots approached 50 percent.

A state official said Beacon would need to construct at least one 50-unit complex if it wanted to get any of a $35 million allocation for veteran housing.

Walter Foeger, the designer of the Dutchess Ski Area at Beacon and inventor of the Natur Teknik (which skipped the snowplow and stem steps of traditional skiing instruction and went straight to parallel), spoke at Dutchess Community College. 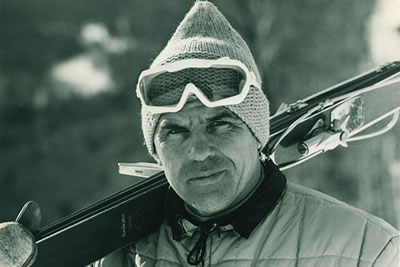 Mike Sellers scored 16 points and Paul Sellers grabbed 21 rebounds for Beacon High School as the boys’ basketball team edged Haldane, 57-56. In the rematch in Cold Spring, Beacon won, 74-72, on a last-second shot by Joe Powell, who had been brought up from the junior varsity squad. Bob Harrison of Haldane had made two free throws with six seconds left to tie the game.

Nearly 20 percent of the students in the Beacon school district were absent on a single day because of the spread of a flu-like illness.

A developer proposed demolishing the former Highland Hospital on Verplanck Avenue to build a 10-story, $6 million nursing home. The hospital had been empty since 1960. There had been plans in 1967 to use the building as a medical center, but the county determined it was not fireproof and its corridors were too narrow.

Benjamin Roosa, a 1920 Beacon High School graduate who served as a city judge for nearly 30 years, died at age 67.

The Beacon Piece Dyeing and Finishing Co. admitted to 50 counts in a federal water pollution indictment and paid a $25,000 fine. The government accused the firm of dumping dyes and other industrial waste into Fishkill Creek for nearly a year. The firm said it would have to spend twice its net worth to meet federal standards without financial assistance from the state.

David Babcock resigned from the Republican Committee and urged that the “party be cleaned up in Beacon,” calling its leadership “defeatist.”

The attorney defending Martina Banks in her trial for second-degree manslaughter told the jury that while she had shot her husband inside their Chandler Street home, he had been unfaithful.

A three-year study predicted that one of the most difficult problems that would face southern Dutchess County in the year 1990 would be road capacity. It concluded that traffic in Beacon would increase by 120 percent and noted that while Interstate 84 had been opened in 1960 to relieve congestion, it had generated more traffic on nearby roads.

The Beacon Warriors, a Hudson Valley team sponsored by the Eastern Paralyzed Veterans Association, prepared to leave for Nashville, where it was the top seed of the Division II tournament of the National Wheelchair Basketball Association. The squad had won four games the previous weekend in a tournament it hosted at Beacon High School to improve to 18-8.

Highway Superintendent Randy Casale said he had two men patching potholes daily, calling it the worst situation he’d seen in six or seven years. “Basically, we’re doing the same holes over and over,” he said.

Kareef Mima, 19, pleaded guilty to first-degree manslaughter, admitting he shot a friend, Adrian “Mike Fats” Brown, who was sitting on a stoop at 192 Main St. Mima insisted he was aiming for Angelo “Chubby” Shorey, whom he said made a motion as if reaching for a gun.

Mayor Clara Lou Gould said the city wanted to use a permit system, rather than meters, to regulate parking on River, Bank and West Main streets near the train station. “Metro-North doesn’t care how we do it,” she said. “They just don’t want people parking there for free to avoid their lots.”

A 17-year-old was arrested in Poughkeepsie with 36 packets of crack and two loaded handguns, including one stolen from a home in Beacon, police said.

The Youth Resources Development Corp. in Beacon was preparing six high school dropouts for their general equivalency exams and two others to enter college. The students also spent 20 hours a week rehabbing a home at 11 North St.