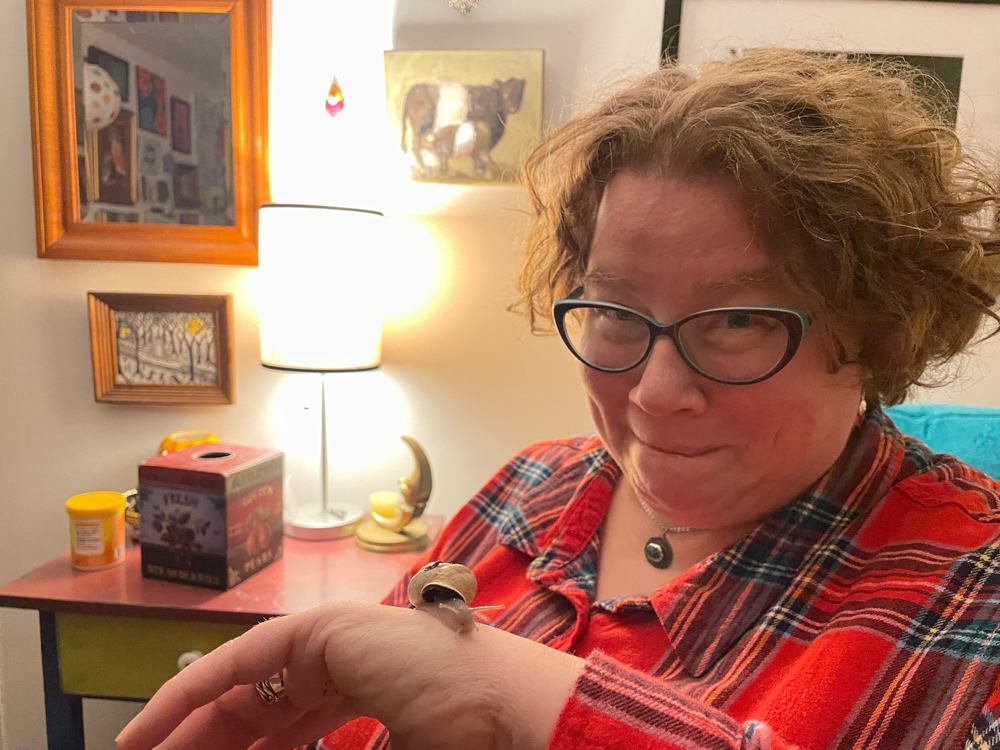 Jennifer Sarah Blakeslee with one of her snails (Photos provided)

Jennifer Sarah Blakeslee, by her own admission, has “a propensity for weird animals.”

The Beacon resident says this nonchalantly, which is less surprising when you learn she keeps snails as pets — she gushes over them on Facebook — and says her favorite creature is the turkey vulture.

She acquired the snails after reading The Sound of a Wild Snail Eating, by Elisabeth Tova Bailey, which had been recommended by a friend. It tells the story of a woman who was bedridden and isolated for months and found solace in a garden snail kept in a tank nearby.

“The way it was written pierced through my inability to focus [because of the ongoing pandemic] and I was enchanted by this notion of just this one tiny organism coming to symbolize so much,” Blakeslee says. 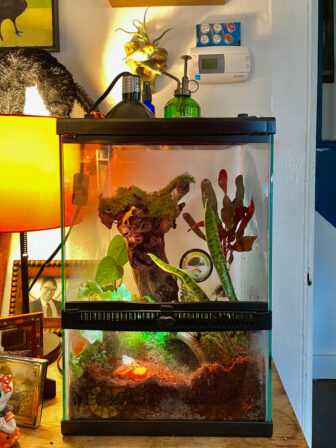 Blakeslee went online and discovered that snails can be purchased as pets. “I ordered a terrarium and researched how to create a habitat for them,” she recalls. “You can create an ecosystem in these small, contained spaces. I have a little ceramic house and hollowed out bones. You have to put moss on any hard surface, because if the snail falls, it could crack its shell.

“The snails are hermaphrodites, tiny little prehistoric beings, carrying their houses on their back,” she notes. “They’re like a supernova of how amazing nature is.”

She initially ordered two, then added three more, of a “bred version of a garden snail — there are lots of kinds, including African land snails which are bigger than a human hand and that’s a whole other level of caring for a creature.”

She also found other snail lovers on Instagram and a pet snails group on Facebook that offers guidance and advice.

“I learned about the different kinds of food snails need, and how a bowl of water can drown them, so instead you spritz water with a mister onto the interior sides of the terrarium so they can glide around in the condensation,” Blakeslee says. “I love it, because any politics or drama is completely separated. In this group, all we talk about is snails.”

She has given some thought to why the snails appeal to her. “The notion of nesting is important, creating a home where people feel welcomed and comfortable,” she says. “Here I am, 51 years old, building a fairy garden, thinking ‘I’ll put this bit of moss here.’ It’s a little like Japanese ikebana [floral arranging], creating a beauty until you say, ‘OK, I’m done.’ 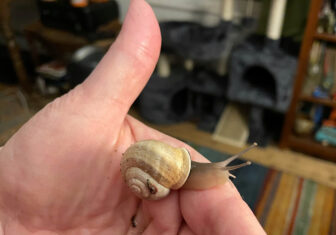 “It’s very Zen for me,” she adds, “a coping mechanism, creating these spaces for the snails, being able to make a contained bio-active system, of which snails are a part. Scouting around, being able to easily find everything they need in that little world, that’s comforting to me, to provide them with that.

“Growing up, I could never have people over. When I was young, my home situation was such that we didn’t have a social life, so the notion of taking a negative I’ve experienced and making it a positive — all of it is just so engrossing.”

The snails themselves aren’t behaving as Blakeslee expected they would.

“I was expecting a nonstop interactive pet, but they’re slow, kind of sluggish,” she says. “Part of it is winter: They may sleep for a week, and that’s OK. Also, they’re nocturnal. But it’s always nice to know that they’re here and to have what they need. They’re a great pet for kids because they are low-maintenance and half the fun is creating their little world.”

Are her three cats a threat? “The cats couldn’t care less,” she says.

Blakeslee said she has not always been a keen animal lover. “When I was a little girl, I had a hamster and a little bird, Tweety. I came home from school one day and asked my mom, ‘Where’s Tweety?’ She said, ‘I was waiting for you to notice. He died three weeks ago.’ ”

But she does remember roly-poly bugs. “When I went to sleepaway camp in the 1980s, they called me ‘the bug lady’ — I’d pick them up gingerly from inside the cabins and bring them outside.” And mice. “In college, friends had mice, and while others were skeeved out by them, I loved having them run up and down my arms.”

And the turtle. “Five or six years ago my husband Jeff and I were asked to turtle-sit for our landlord. The turtle was brought to us in his tank. My husband is a voracious knowledge-seeker who loves aardvarks and tapirs and speaks Esperanto. We did some research and discovered it was a rare Malayan box turtle.

“Their habitat is aquatic but this one was being kept in a dry environment, so I got out my lasagna dish and filled it with water and a rock — and the turtle, his name is Norman, took to the water quickly. The landlord asked us if we could keep the turtle, and of course we did.” 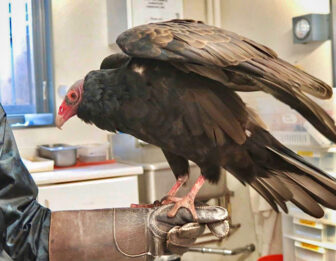 A visit with a turkey vulture

And the turkey vultures, Blakeslee’s greatest joy? “They’re magnificent,” she extols. “I adore them — they’re the quintessential examples of evolution. They have red heads with no feathers, because they burrow into carrion and other putrefaction, and if they had feathers on their heads, they would turn into bacteria. They can eat E. coli and anthrax, and they’re profoundly important environmentalists — they clean the area of the Earth that could be fatal to humans.

“They take death and turn it into life. Their defense method, projectile vomit, could fell a horse. There are just lots of cool facts about turkey vultures.”

Blakeslee’s admiration for the birds is such that for her 50th birthday, she and Jeff booked a private, hour-long visit with the birds at the Vermont Institute of Natural Science (vinsweb.org/private-experience).

“For me the turkey vulture thing is the embodiment of animals you might overlook and not realize they have unusual sources of beauty,” she says. “At a time when everything feels so dark, so gray — these things are there, waiting for you to notice them.”

What’s next? A recent Facebook post by Blakeslee offers a clue: “Brood X cicadas: Yayayayay! (Seriously, these guys are the best.)”

One thought on “Something You Don’t Know About Me: Jennifer Sarah Blakeslee”