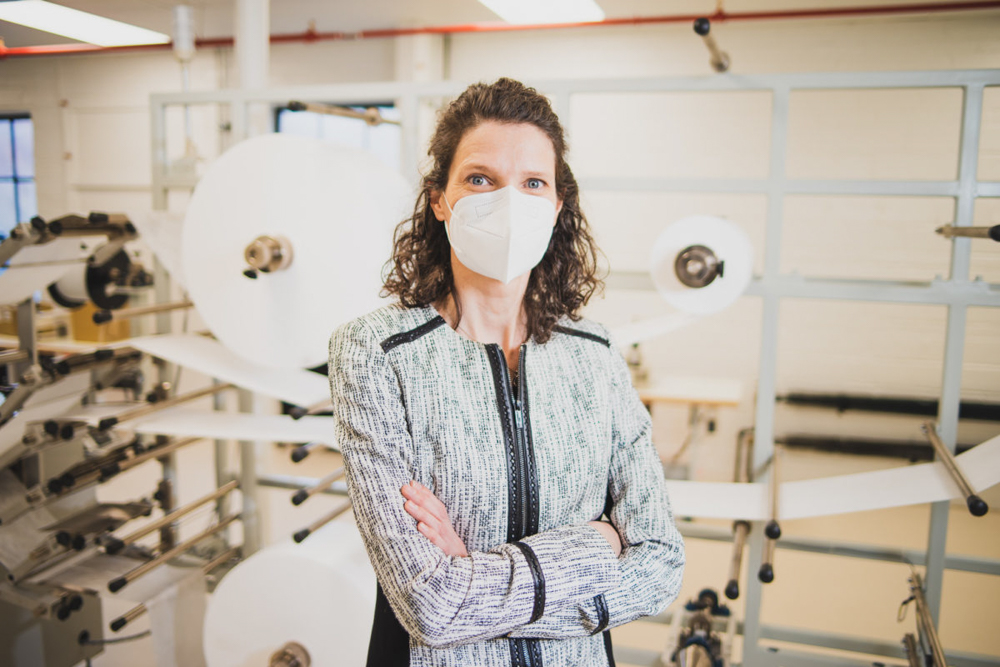 Marleen Vogelaar, the founder and CEO of the Hudson Valley Mask Co. (Photo by Natt McFee)

The pandemic closed one door but opened another for Ziel, an activewear company with a factory in the City of Newburgh.

As hospitals, nursing homes and private companies scrambled to find personal protective equipment during the first days of the shutdown in March 2020, the firm began receiving requests to make masks. When Ziel and other “non-essential” businesses had to cease operations under a state order, it pivoted to producing hospital gowns and hand-sewn cloth masks.

One year and a $390,000 state grant later, that early effort has blossomed into Hudson Valley Mask Co., an initiative created by Ziel that is using a $250,000 automated production line that each month can turn fabric sourced from Italy into as many as 1 million N95-grade face masks, the gold standard used by doctors, nurses and other health care workers.

Hudson Valley Mask is selling its products to companies and individuals while it awaits N95 certification from the Food and Drug Administration and the National Institute for Occupational Safety and Health, which will allow for hospital sales. In addition to the Empire State Development grant, Ziel said it is investing $1 million in the firm, according to its founder and CEO, Marleen Vogelaar.

The masks made in Newburgh are lightweight, water-resistant and capable of filtering 99 percent of airborne particles, she said. Certification makes a difference for the company in part because the pandemic exposed the country’s shortage of personal protective equipment (PPE) and its reliance on products made in China and other countries. The sudden rush to find PPE early last year also led to price gouging and fraud, including the proliferation of masks labeled N95 that were not.

Is Your Mask Fake? 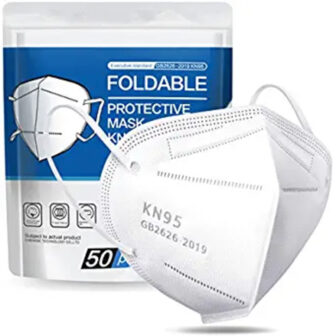 The Centers for Disease Control and Prevention maintains a list of N95 masks that it has found to be counterfeit, including many sold on Amazon. See bit.ly/counterfeitmasks. Signs of fake N95 respirators include:

No markings on the respirator

No approval number (TC) on the respirator or headband

Decorative fabric or other add-ons, such as sequins

A respirator that has ear loops instead of headbands

“We want to show that it’s made in America, it’s made in the Hudson Valley and we’re making actual, real masks,” said Vogelaar, whose crew of eight employees is expected to grow by 20 as production ramps up later this year.

The firm’s 60-foot production line was installed in a renovated room inside its 14,000-square-foot building on Broadway. The masks begin as four layers of two nonwoven fabrics: “melt blown” and “spun bond.” The assembly line is composed of stations that fuse the layers together, score the pattern for each mask, and add a nose bridge and ear loops. Finally, each mask is sterilized with ultraviolet rays.

A cloth mask “works great for not spraying things around,” Vogelaar said, but when out in public, “you better wear something that actually protects you,” noting the federal Centers for Disease Control and Prevention last month endorsed double masking.

Health workers have their own requirements. “They need something soft that doesn’t hurt their face and doesn’t create eczema and any kind of other problems when you wear them for a 10- or 12-hour shift,” she said.

On the Assembly Line

While Hudson Valley Mask awaits its N95 certification, a process that could take several months, the firm is lining up health care facilities as potential customers, Vogelaar said. She believes the demand for masks will continue even after the pandemic is under control and foresees adding more production lines.

“If you’re in Singapore and you have a slight cold, you wear a mask,” she said. “I think our society will go toward that.”

Ziel is one of 28 New York companies receiving more than $16 million from the state to produce ventilators, protective equipment and other supplies. Eric Gertler, the acting commissioner for Empire State Development, which distributes the grants, said the agency was “proud to have supported Ziel and other New York State manufacturers in pivoting to produce critical COVID-19-related equipment.”

At least 30 percent of Hudson Valley Mask’s production is earmarked for the state, Vogelaar said, noting that consumers and companies in New York will receive a 10 percent discount.