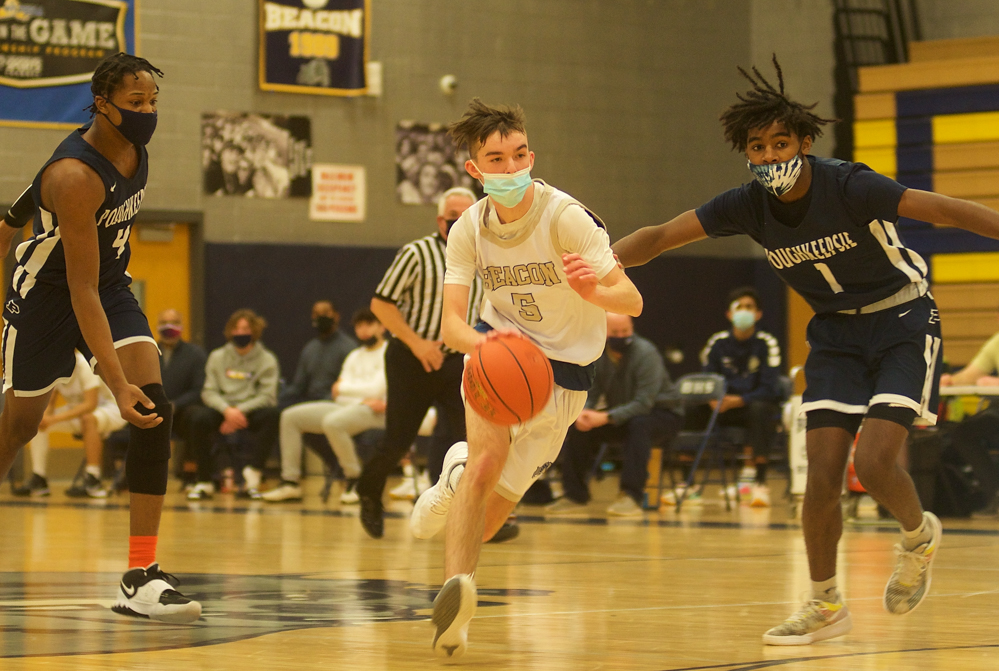 Beacon's Jack Philipbar brings the ball up the floor on Wednesday against Poughkeepsie. (Photo by S. Pearlman)

But on Sunday (Feb. 28), the team learned that a Pawling player had tested positive for COVID-19, triggering a 10-day quarantine for both teams. The Blue Devils (9-0) will miss the final three games of their 12-game season and may not be able to practice before the playoffs begin on Wednesday (March 10).

Haldane Coach Joe Virgadamo said he and his players were frustrated by the news but happy they have time to come back and compete for a regional title. 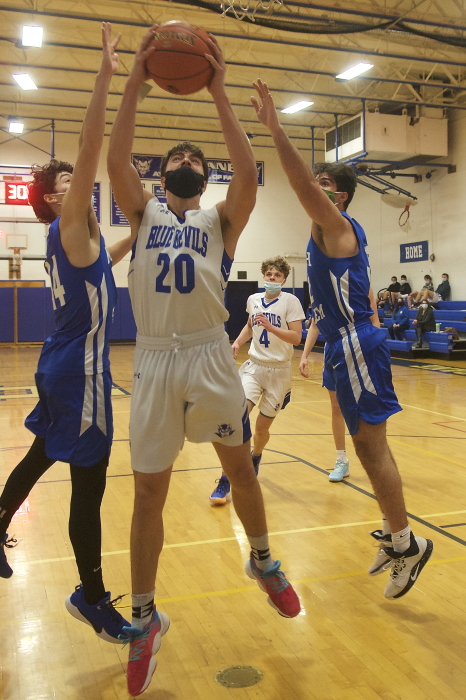 He said the team had a good practice on Sunday before learning it would not play again before the tournament. “We want to go back like there was no break,” he said. “The kids have learned to be patient in this journey.”

Against Pawling on Feb. 27, Matteo Cervone led the Blue Devils with 24 points, Dan Santos added 15 and Soren Holmbo had nine. A day earlier against Croton, Cervone had 16 points, Holmbo scored 13 and Ryan Irwin had 12.

Haldane will compete in the regional tournament in a group that includes Lakeland, Peekskill, Walter Panas, Hendrick Hudson, Briarcliff, Croton and North Salem.

A young Beacon High School team continued to struggle this week, dropping four games by at least 26 points each to Poughkeepsie (twice), Ketcham and Lourdes.

Coach Scott Timpano said his players, who include six juniors and six sophomores, understand they are building for next season. “There’s a lot of high school basketball in front of them,” he said, noting that Green has been playing well despite recovering from a sprained ankle and that Gillins “has a knack for scoring; he could be good for us the next few years.”

Beacon was scheduled to visit John Jay East Fishkill today (March 5) and Lourdes on Sunday. The playoffs are scheduled to begin Wednesday with teams from Dutchess and Rockland counties.

The Beacon girls picked up two wins over Poughkeepsie last week, while falling to Ketcham and Lourdes, to finish at 4-7 entering the playoffs. 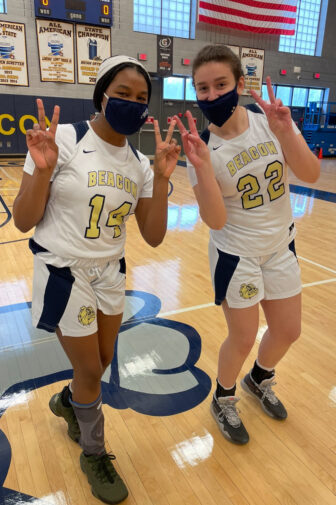 In a 45-31 win at Poughkeepsie on Wednesday (March 3), eighth-graders Lila Burke and Reilly Landisi and senior Dania Gillins each had 10 points. On Tuesday, the Bulldogs lost badly to a strong Lourdes team, 67-14, but on Monday defeated Poughkeepsie, 62-43, behind 16 points each from Tianna Adams and Landisi.

Coach Christina Dahl said her young players have shown progress. “Lila Burke — I knew she was capable,” she said. “She did the job we needed her to do and was great under the basket. Gillins helped us pull away in the second half [on Wednesday] with a couple of big 3s, and Reilly has been managing games well at point guard. Her dribble penetration creates opportunities elsewhere.”

Haldane, at 1-7, is looking for a second win before the playoffs next week. Its final regular season games are scheduled for Saturday, hosting Hendrick Hudson, and Tuesday, visiting Putnam Valley.

The Blue Devils — who have won seven consecutive gold balls — are in the unfamiliar position of hoping they’re not the only team in their Putnam/Northern Westchester group not to get a playoff invitation.

Haldane faced a pair of challenging opponents last weekend, falling 62-31 to Putnam Valley and 53–34 to Croton. Maddie Chiera led the team in scoring in both games, with 12 and 10 points.

Despite the lopsided scores, Coach Jessica Perrone said it is good for her team to face tough competition. “They recognize the progress we’re making,” she said. “It’s just a matter of being more consistent.”

You know it’s been a different kind of winter when your season finale is at an underground parking garage.

The Beacon indoor track team put the wraps on its pandemic-shortened season with a frigid meet on Feb. 26 outside at Yorktown, followed by a Saturday matinee at the Palisades Mall. 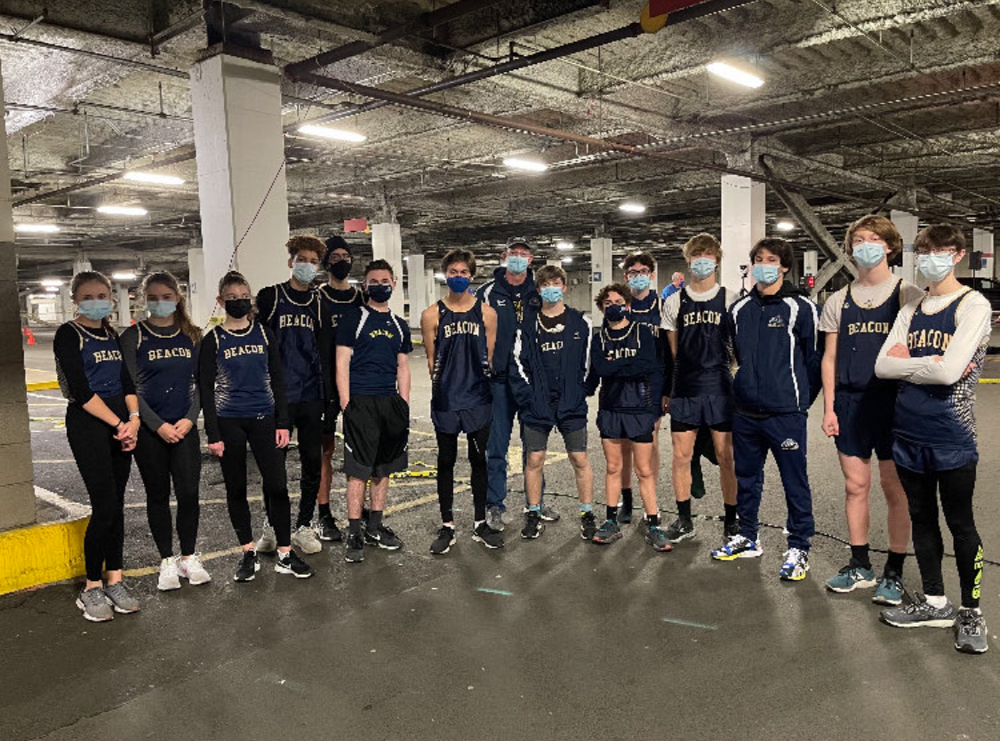 The Beacon track team finished its season with a meeting in a parking garage. (Photo provided)

They were happy to have it.

“The times weren’t all that fast, but it was certainly a memorable experience in what is an otherwise forgettable year,” Coach Jim Henry said of the mall races.

“Honestly, the coaches complain about the situations far more than the kids do. The kids just seem to have an ‘if this is all we can do, let’s get to it’ attitude.”

The spring track season is only weeks away.

“We’re giving kids a week to recover and thaw out,” Henry said. “We have quite a few talented kids who haven’t run in a real track-and-field meet in over a year and are pumped up to perform.”