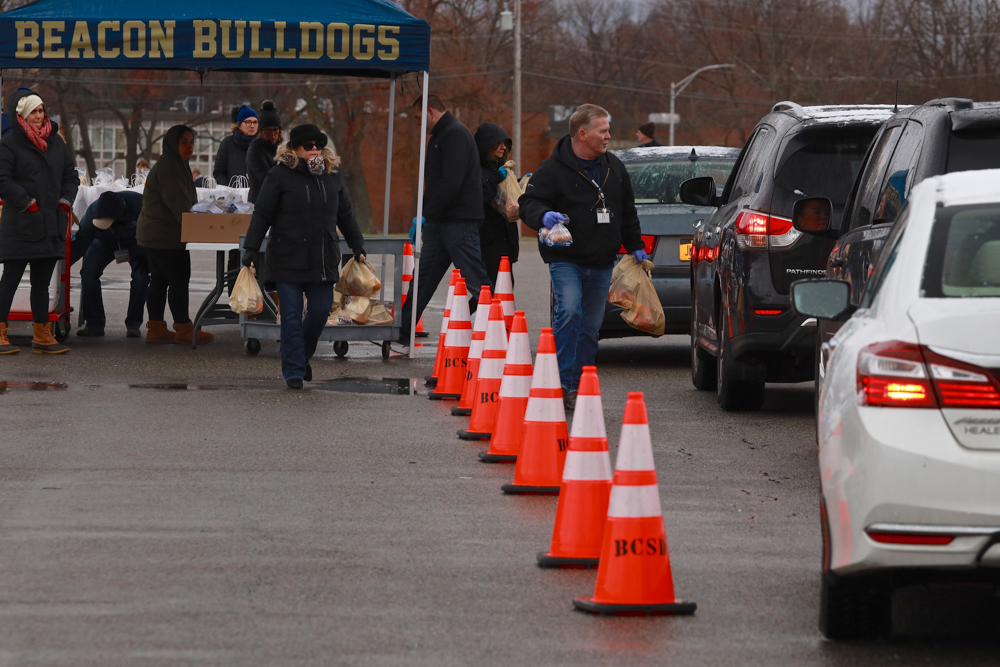 A small staff of Beacon school cafeteria workers on March 23 handed out more than 2,500 meals to students, their families and other members of the community. Two days later, they prepared 6,000. (Photo by Ross Corsair)

9 The World Health Organization (WHO) says a cluster of pneumonia-like cases in Wuhan, China, that has infected at least 59 people is caused by a new coronavirus.

21 The Centers for Disease Control and Prevention announces the first confirmed case in the U.S. — a Washington state resident who had returned six days earlier from Wuhan.

7 Cuomo declares a state of emergency.

11 WHO declares the outbreak to be a pandemic.

12 Dutchess officials announce the county’s first case and outline a number of steps being taken, including activating the county’s Medical Reserve Corps, reassigning staff to help contain the virus and creating a webpage for updates.

16 Cuomo orders all bars and restaurants to close by 9 p.m. Philipstown Supervisor Richard Shea suspends all non-essential operations and asks residents to contact the town only by phone or email.

19 The Riverview Restaurant in Cold Spring closes its doors, joining other restaurants that close or switch to takeout. Venues began canceling and postponing performances.

20 Dutchess reports its first death, a 69-year-old man who sought treatment for breathing difficulty at MidHudson Regional Hospital in Poughkeepsie… Cuomo signs a New York on PAUSE order that requires all “non-essential” businesses to close as of March 22, bans non-essential gatherings of any size and requires residents 70 and older to shelter at home… In Cold Spring, Foodtown and Drug World report that customers are binge-buying food, hand sanitizer and cleaning products.

27 Cuomo orders all schools to remain closed until April 15. 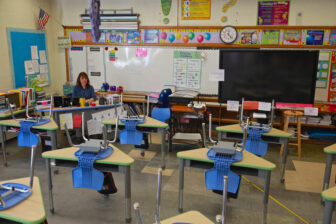 Nancy Romano, technology specialist, in her classroom at the Garrison School after schools were closed (Photo by Ross Corsair)

2 Rep. Sean Patrick Maloney, whose district includes the Highlands, announces that Dutchess County will receive $856,000 in emergency funds through the first of what will become three federal relief packages.

7 The death toll in Putnam County reaches 15… Everyone must wear a mask in public or whenever they cannot maintain social distancing under an executive order issued by the governor.

19 The death toll in Dutchess reaches 50.

26 Cuomo announces a plan for a phased-in re-opening of closed businesses that will begin on May 15.

1 The death toll in Putnam is 45 and Philipstown reaches 101 cases… Cuomo announces that schools will remain closed for the rest of the academic year.

20 A Putnam judge rejects a petition by the Legal Aid Society to release eight inmates who it argued were at risk of contracting COVID-19.

26 The Mid-Hudson Region, which includes Dutchess and Putnam, begins Phase 1 of the state’s reopening plan. Construction companies, manufacturers and retailers are among the businesses allowed to restart.

4 The state announces that the Mid-Hudson Region can enter Phase 2 of the re-opening plan, allowing outdoor dining and worship services.

23 The Mid-Hudson Region enters Phase 3 of the re-opening plan, allowing personal-care businesses such as hair salons to operate.

7 Under Phase 4 of the re-opening plan, businesses and organizations offering “low-risk” indoor and outdoor arts and entertainment, along with film and music productions, are allowed to restart.

13 Cuomo announces that schools will be allowed to re-open in the fall if their region is in Phase 4 and daily infection rates remain below 5 percent using a 14-day average.

5 Molinaro says that more than 170 Dutchess County employees have applied for buyouts under a program created to reduce expenses in the 2021 budget.

21 The president of Marist College in Poughkeepsie says the school has suspended 15 students for not following health guidelines at an off-campus party.

24 Gyms and fitness studios, and other fitness businesses are allowed to re-open. 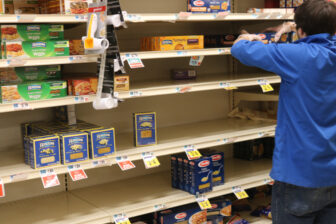 Restocking at Foodtown on March 14, the first Saturday of the shutdown. (Photo by M. Turton)

2 The Garrison School opens with all students in-person unless their parents or guardians opt for remote education.

14 The Beacon school district re-opens under a hybrid model.

23 Molinaro announces an outbreak at the Hedgewood Home for Adults in Beacon, with 13 residents and 17 staff members testing positive. At least seven residents later die.

7 There were no new cases in Philipstown during the previous week.

13 Beacon announces that three of its employees had tested positive.

17 The state says that some theaters, including in Dutchess and Putnam, will be allowed to re-open beginning Oct. 23.

11 With cases again surging, Cuomo orders bars and restaurants to close at 10 p.m. and restricts gatherings at private residences to 10 people.

18 The Garrison School switches to an all-virtual model in anticipation of the state ending in-person learning in Putnam County because of rising infection rates.

30 Hospitals are directed to have plans to increase bed capacity by 50 percent, identify retired doctors and nurses who could be deployed and prepare for the use of field hospitals… Dutchess ends the month with 1,789 new cases, compared to 417 in October. Putnam records 1,023 new cases for the month, compared to 232 in October. Cases will continue to rise through January.

8 The death toll in Dutchess reaches 200.

11 The federal Food and Drug Administration (FDA) authorizes the Pfizer-BioNTech vaccine for emergency use.

14 A nurse at Long Island Jewish Medical Center in Queens becomes the first person in the state to receive a COVID-19 vaccine.

18 The FDA authorizes the Moderna vaccine for emergency use.

3 The death toll in Dutchess reaches 250.

26 President Joe Biden announces that vaccine distribution to the states will rise  16 percent, to 10 million doses.

11 CVS and Walgreens expand vaccinations under a federal program.

20 Dutchess reports its first case of the more-contagious “U.K. strain” of the virus.

23 Putnam reports its first case of the U.K. strain.

27 The FDA authorizes the Johnson & Johnson vaccine for emergency use.