But this fall, its students will be playing league games across the Hudson River, in Orange, Sullivan and Ulster counties, as part of Section IX. There are 11 sections in the state, and schools moving between them is uncommon, according to the association.

The move, spearheaded by Athletic Director John Giametta, was approved by the school board during its meeting on Monday (March 8). Both Giametta and board members said they hoped the switch will create more competitive games by matching Beacon against schools that are comparable economically.

In virtual presentations, Giametta made his case to the school board at a meeting last month and to about 20 members of the public on March 5. 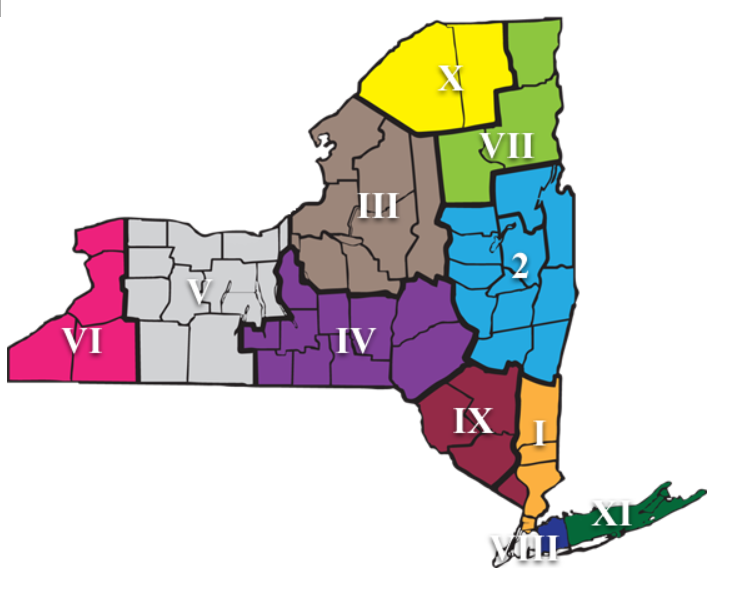 A map of the public high school athletic sections; Beacon will move from I to IX.

Giametta noted that Beacon has won only 10 sectional titles since 1990 — four of which were in team sports, the rest by individual athletes in boys’ track or bowling. He attributed this, in part, to Dutchess County being at the bottom of the four Section I counties in median household income. This puts Beacon players at a disadvantage, he said, because the parents of student athletes in wealthier locales such as in Westchester can afford private training, and the high schools have better facilities and more experienced coaches.

He said he had surveyed the varsity coaches and found universal agreement that moving to Section IX “would make us more competitive and would increase our opportunity for postseason play,” Giametta said.

There are other advantages to switching, he said. While the district would pay a higher membership fee, that would be offset by decreases in other fees, with a net savings of $6,000 annually.

In addition, the move will reduce travel time to away games. Section I teams must travel as far as the New York City Armory (for indoor track) and contend with parkway prohibitions on buses and metropolitan traffic.

Giametta said that while the mileage to Section IX opponents will be about the same as those in Section I, many Section I schools are not accessible from the Taconic Parkway, “causing us to take [longer] alternate routes.”

Although Beacon’s coaches see the advantage of the move, not everyone had the same level of enthusiasm. In comments that Giametta shared during his presentations, Scott Timpano, the boys’ basketball coach, noted that the league in Section I “is more competitive and more well-known” and “the premier league in the state.” He also noted some rivalries are decades-old.

But, he said, “we understand that most programs would benefit overall from a move and are willing to go along with the good of the other programs.”

School board members on Monday expressed their support for the switch, and the resolution passed unanimously.

“No change is perfect or easy, but he communicated with all of his coaches to make sure there is no strong resistance to it, and the intention behind the change — to increase student participation in our athletic programs and grow partnerships with other districts — outweigh any negatives for me,” said Meredith Heuer, the board president.

One thought on “Beacon to Move to Section IX”