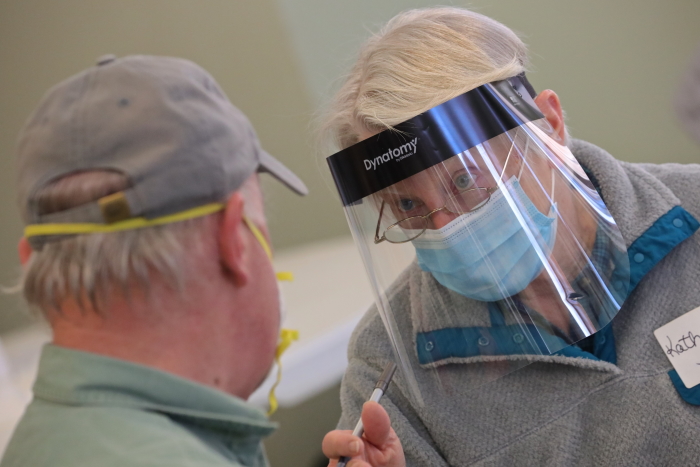 Drug World of Cold Spring held a vaccination clinic on March 5 at the North Highlands Fire Co. in Philipstown for residents ages 65 and older after learning three days earlier it would receive 400 doses. The clinic was staffed by 16 nurses, including Kathy McGurty, shown here, and 40 other volunteers. (Photo by Ross Corsair)

A year after the shutdown began, measures of grief and hope

This weekend marks the anniversary of the Highlands shutting down.

The COVID-19 pandemic brought sickness and death — to cities, suburbs and rural areas; to Black and white and Latino, and rich and poor; and to nursing homes and retirement communities.

Businesses were forced to close, some never to reopen. As cases surged in March into April, millions lost jobs and health insurance and found themselves lining up for groceries at food pantries and facing eviction or foreclosure. A drop in cases beginning in May and lasting into October gave way to a surge in November, December and January.

There were moments when “it looked like we were starting to see daybreak and then we didn’t,” said Dutchess County Executive Marc Molinaro, who lost his father to COVID-19 on April 10. “Those little moments, I think, were just as devastating as any single low point, because just as our residents felt like things were getting normal again, we’re back engaged with them telling them we’ve got to do this a little bit longer.”

The pandemic also produced heroes: The doctors and nurses, both in hospitals and in county health departments, who risked their lives tending to the sick and the dying; the all-volunteer Medical Reserve Corps in Dutchess and Putnam counties; and the local officials and residents who filled the snowballing needs for food and face coverings.

The SallyeAnder shop in Beacon donated soap it had been making to the Beacon and Newburgh school districts for distribution. Lynn and Greg Miller of Cold Spring, the owners of Veggie Go-Go, raised money to provide meals to health care workers and to support struggling restaurants.

Beacon resident Dara Silverman and others formed Mutual Aid Beacon and recruited a corps of volunteers to collect and distribute food to homebound seniors and the newly unemployed, at one point delivering to 150 people each week. Donors gave hundreds of thousands of dollars to the Town of Philipstown, which it used to provide residents of the Highlands and beyond with groceries and other necessities.

“These tough moments are also when we see how remarkable people are and the goodness they have in their hearts and it’s only because of that that we’re going to get through this,” Rep. Sean Patrick Maloney, whose district includes the Highlands, said last week.

A Long, Tough Year
Voices from the Pandemic
Those We’ve Lost