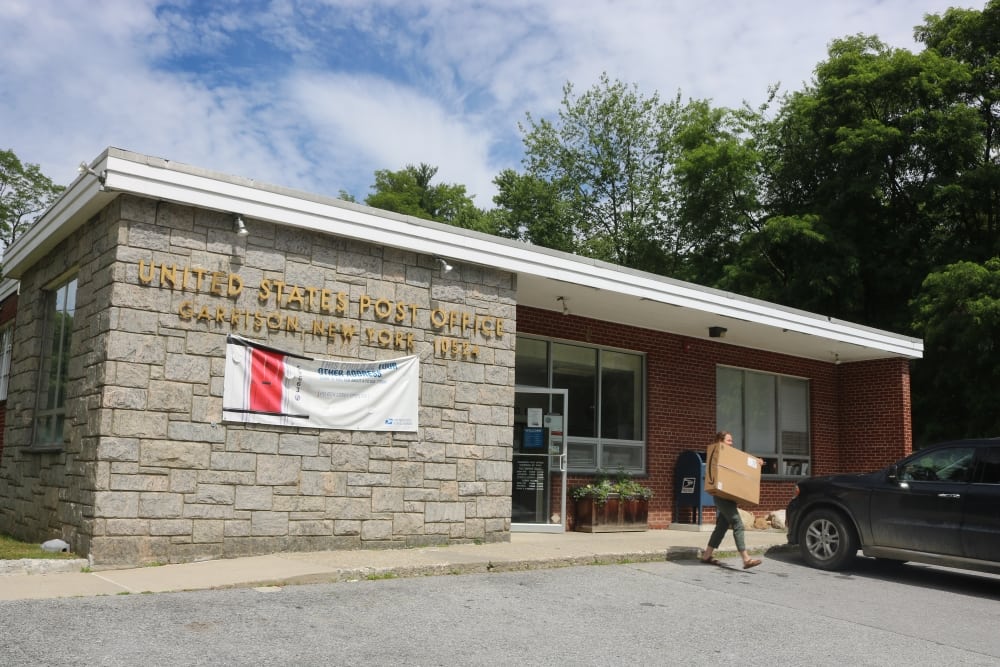 Seven years ago, neighbors of the Garrison post office complained to the Philipstown Town Board about what they said were dangerous maneuvers by mail trucks, road damage, noise and other disruptions to the tranquility of their enclave off Route 9D.

Last week, those concerns resurfaced at the board’s monthly meeting, held via Zoom because of pandemic restrictions.

Jeff Grocott, who lives on Grassi Lane, a private road that intersects with Route 9 adjacent to the post office, told the board on March 4 that use of the post office by Amazon delivery trucks, which often arrive around 4:30 a.m., compounds the sense of intrusion.

Local post office authorities have sought solutions but failed, he said. He added that mail trucks and other large vehicles seem to regard the post office as an industrial plant, not a small structure in an area zoned for hamlet-mixed usage, with residences behind it.

“Whatever they’re doing is completely against the zoning,” he said. But “we’re pushing up against two very powerful organizations” — the Postal Service and Amazon.

Grocott said that paving and other changes at the post office have exacerbated drainage problems and had other adverse effects on Grassi Lane.

Supervisor Richard Shea expressed sympathy and apologized “for not being more effective” in resolving the ongoing conflict. “It hasn’t been for lack of effort,” he said. Since 2014, he explained, Town Board members have contacted the USPS and representatives of the county, state and federal governments. “Things calm down for a little while and then just pick back up,” he said. Municipalities “don’t have a lot of control over the Postal Service. They do have to deliver the mail.”

Putnam County Legislator Nancy Montgomery, who previously dealt with the matter as a member of the Town Board, has continued to try to find a resolution for the residents. (Her predecessor, Barbara Scuccimarra, also encountered difficulties.)

“It’s not an easy one to solve,” Montgomery said. “I’m frustrated with the U.S. post office for not helping us out a little more.” But she also warned that forcing the post office to move, as some critics propose, might only create different problems.

“We could end up with something worse and less responsible,” said Town Board Member John Van Tassel. He wondered if barriers could be installed to minimize noise from the post office.

Noting that federal law exempts the USPS from local zoning codes, Shea expressed doubts that Amazon and other private carriers can claim such protection. “They shouldn’t be coming before 7 a.m.,” he said, promising to consult the town attorney. “We’re going to keep plugging away.”

However, he also advised USPS neighbors to not send the owner of the parcel — listed in tax records as Moni LLC — vitriolic emails, such as some that Shea said he had read, in which the “tone is something that would not bring about harmony” and which “also completely closed the door on any further discussion.”

Shea said that he has known the family that owns the lot for 35 years and that the son who oversees the rental business seems open to dialogue. He said he has offered “to sit down with everybody” but “so far I haven’t had any acceptance.”

One thought on “Philipstown Hears Renewed Complaints About Post Office”