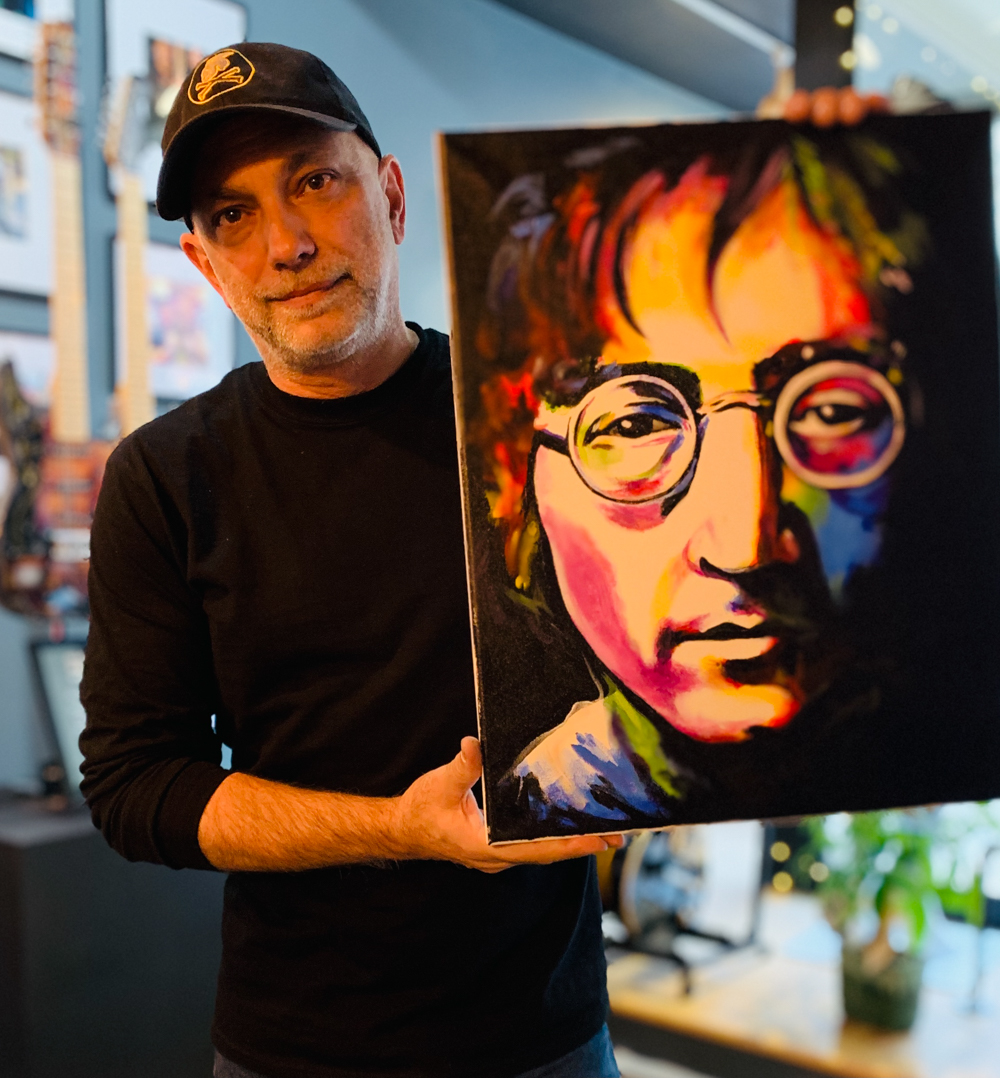 Ron Williams with his portrait of John Lennon (Photos provided)

Ninety percent of the guitars that Ron Williams sells are for people who don’t play guitar.

Williams owns RonzWorld, a “guitar gallery” that opened last year in the space formerly occupied by the RiverWinds Gallery. It is home to about 30 guitars destined for homes where most will be admired rather than played.

Each is custom-painted and more artwork than instrument. You can play them but he says more people are interested in them as an expression of fandom. 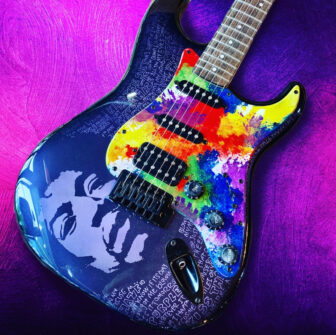 Williams was working in advertising and marketing, commuting daily from Fishkill to New York City, when, five years ago, his employer transferred him to Fort Lauderdale. He made the move but his family — he has four children ages 12 to 25 — stayed put, and he came home every other weekend.

With a lot of time on his hands in Florida, he picked up a guitar “to see if I could paint it. I’ve always done traditional art.” He designed the character The Joker, from Batman. “The paint job came out fine, but I struggled with how to finish it,” he recalls. “I had no idea what I was getting involved in. Let’s just say you can’t spray chemicals in a Fort Lauderdale apartment — as I found out. It left me with a lot of respect for auto body guys! So, I rented a garage.”

Pleased with the way the Joker guitar turned out, he took it to a trade show, where he showed it to Squiggy DiGiacomo of The Music Experience, which lets fans test-drive guitars. DiGiacomo thought the artwork was a “wrap,” which is a sheet of vinyl that covers the instrument to change its appearance, Williams says. “He was impressed that it was painted and asked me to paint one live, after the show. He and I both realized we were on to something.”

With that, Williams launched a new career, working at about 14 rock festivals a year, typically headlined by bands such as Guns & Roses, Metallica and Foo Fighters. Williams tailored his guitars accordingly. But he realized he couldn’t survive with a stall with six or seven guitars. “There are usually more than 100,000 people there [over several days]. Am I going to stand there calling out ‘Hey, buy a guitar?,’ especially when nobody knows who I am? 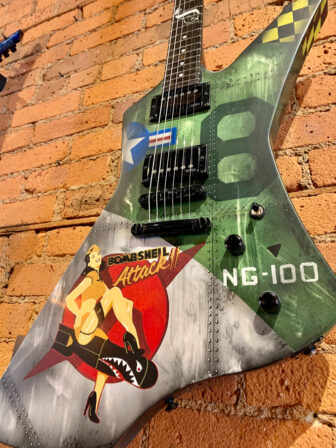 A custom guitar by Ron Williams

“I thought, what if we do fan engagement? I’d paint guitars, hire ‘brand ambassadors’ to walk around and post photos of fans with them. We’d get the guitar signed by the band, bring in a charity, hold a raffle. The profits are shared, the guitar promotes the festival, it cultivates fans for the band, and someone goes home with a custom guitar.”

It all went well for six years, until the pandemic shut down the festivals last year. Williams initially thought he could ride it out, but as the pandemic stretched from weeks into months, he was forced to think on his feet. “By the beginning of summer, I had inventory and no money coming in, and I started thinking hard about how to get the guitars in front of people. Nobody is going to buy a guitar for $2,000 to $3,000 without seeing it firsthand. I had to open a store. If it wasn’t for COVID, I wouldn’t have explored.”

Along with his Beacon gallery, Williams has a workshop in Newburgh where he makes the guitars — he divides his time between the two.

The weekend crowds in Beacon have surprised him, he says. “There’s a huge amount of people coming up from New York City. Beaconites — a mix of musicians and non-musicians — also have come in. We cater to fans of classic bands like The Beatles, the Stones, The Who, Van Halen, Led Zeppelin. My people are the ‘OMG, I saw them in 1977 in the Garden’ crowd — that’s what spurs the purchase.”

“What I’ve found here is that the crowd is largely my age, in their 50s. It’s interesting how it plays out. Every single person has a story. Music is such a large part of your life. If you hear a song on the radio popular in high school, you instantly recall that moment. You discover that music and art does bond people. No politics in here — you can just talk music. 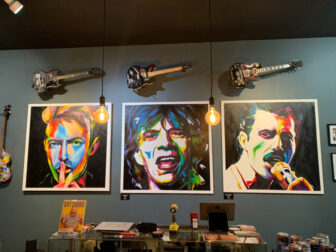 “Younger people are almost more interested in the art aspect of it,” he says. “They’re inquisitive about the process. They ask if I can paint Kurt Cobain or Post Malone. Older folks sit back and enjoy the atmosphere and the younger kids are more how, what, why?”

In response to requests, Williams began painting portraits as well as guitars. “One woman came in and told me she would love to learn how to paint like that,” he says. “I said I’d teach her. Then it occurred to me: What if we did a paint-and-sip with rock stars? I started doing two-and-a-half-hour classes of up to 10 people, and every single one of them sold out [for $75 per person]. If you can get me five or more people and tell me who you want to paint, we’ll do a class.”

His gallery also stocks merchandise such as tour clothing (although the bestseller is a CBGB shirt), jewelry and mini-guitars.

Williams says the biggest compliment he gets is “the vibe in here is so cool,” because “if I had set out with the thought of creating a cool vibe, it wouldn’t have worked.”