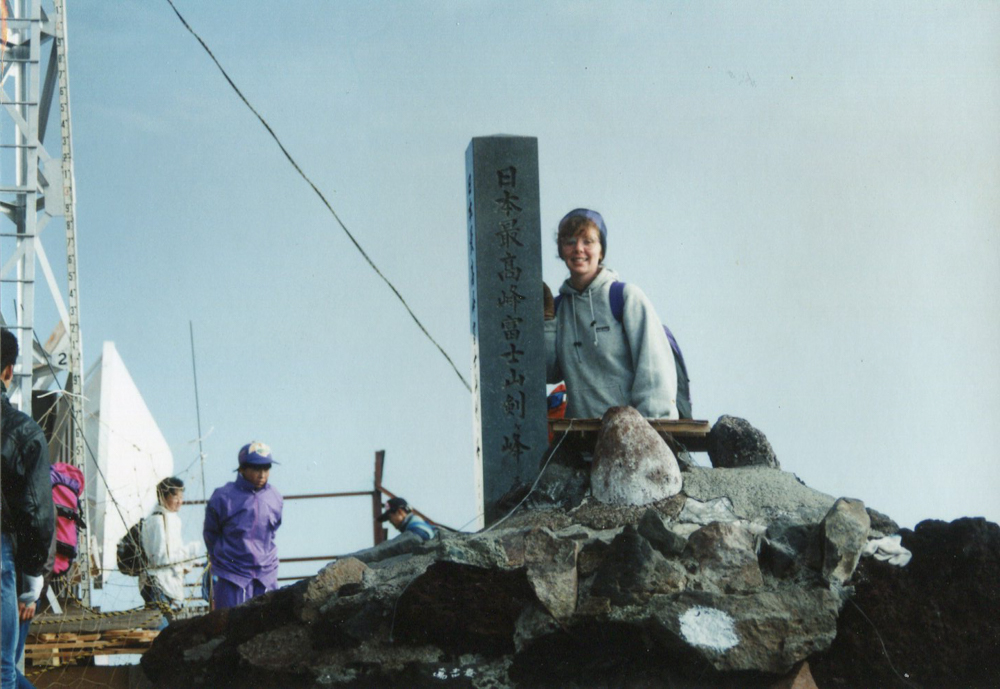 Hadden atop Mount Fuji, after climbing all night (Photos provided) 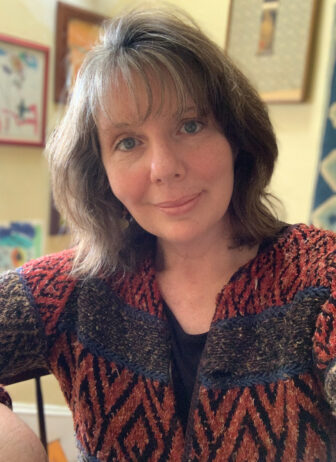 How did you wind up in Japan?

In my first year of college in Canada, I took a linguistics class in which the professor shared tales of traveling the world teaching English. I was hooked, and made it my degree. After graduation, I was hired by the Japan Exchange and Teaching (JET) program and spent 1994 through 1997 in Oyodo-cho, a town in Nara prefecture, 90 minutes from Osaka. I worked in a junior high school as an assistant English teacher.

How did the educational experience differ from Canada’s?

It was a fairly rigid. There were regular uniform checks, and teachers stood by on graduation day with black hairspray in case a student had decided to assert his or her individuality with blonde or red hair dye. After a student was accused of shoplifting, three teachers went to deal with it, not the student’s parents. The students were sweet, though. I also taught adults at night, which was the highlight of my week. I am still in touch with some students 24 years later.

Were Westerners common in the area?

Not at all. I was a source of curiosity. I had to tape a sheet of paper partially over the inside of my mail slot because little kids liked to peek to see how the gaijin [foreigner] lived. I would come to school on Monday and have a student recount the contents of my grocery basket from that weekend. They hadn’t been at the store, but their grandmother had been! 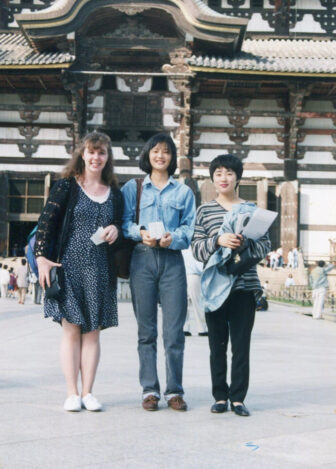 Were there “lost in translation” moments?

Many. With the cultural and language barriers, I felt like a child at times. People were amazingly kind to me, but I inevitably experienced bouts of homesickness. On one particularly difficult day, I stopped at the bakery to get something to drown my sorrows with. I took the treat home, ready for the chocolate inside, only to discover I had bought a bun filled with red bean paste. I’m pretty sure I cried.

I made other mistakes. While traveling home from Tokyo during my first week with my boss, I bought a nice lemon drink at 9 a.m. from a platform kiosk, cracked it open in the sweltering summer heat only to discover it was sake, not something to be drunk in the morning, or in front of one’s boss, especially if you were a woman.

Another time that first summer, I put my futon over my balcony railing to air it out like I saw my neighbors do, except I didn’t know about the clip. I came home from work to find my mattress one floor down on my neighbor’s balcony, which was awkward to knock and explain but better than having it end up on the train tracks below.

On another occasion, I was working at the school board office when beautiful, thick grapes were brought in as a gift and distributed on plates. I was enjoying mine until the woman at the desk next to me opened her Japanese-English dictionary with an apologetic smile to the page with the word barbarian. I was the barbarian, not having known you must slit the grape with your front tooth, push the contents into your mouth and leave the skin on the plate.

After climbing Mount Fuji, I wanted to clean up and asked at the tourist counter where I could find a sento (public bath — originally a strange concept but by then I had acclimated to sitting naked with strangers). Thank goodness my Japanese was good enough to recognize that I had been sent not to a sento but to a soapland, which is a brothel-type bathhouse. I returned to the bus station to get another address, this time from the horrified counter person on the next shift who couldn’t understand how the other person had made such a mistake!

Was there a time when you felt that you were seen as a local?

Yes. I served as the town’s honorary police chief for a day, which entailed putting on a uniform — complete with a regulation handbag — and handing out fliers at the train station about emergency procedure reminders. Two nights later, the police chief called me at 9 p.m. from a tiny bar that probably sat 10 people. He and the rest of the off-duty officers were there, and he invited me to sing karaoke. I learned a few stand-by songs. Pro tip: Anybody can sing “Love Me Tender.” 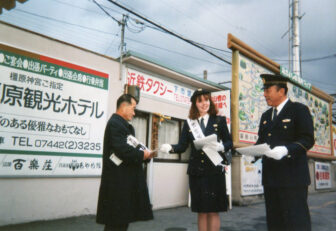 Jackie Hadden as “police chief for a day” in Oyodo-cho.

What most resonates with you now, 24 years later?

I loved the beauty of the country: the vivid green of rice paddies in the wet season, turning to gold in the summer; the call of cicadas filling the long, hot days; the scent of incense and the lulling sound of chanting in the temples; the beautiful surprise of coming across peaceful shrines in unexpected places. I loved the simple kindness that lies below the formality of the people in Japan.

I’ll also never forget waking up to the sound of rattling trash cans, which turned out to be the 7.3 Kobe earthquake. Interestingly, my grandfather was on a ship in Yokohama harbor in 1923 when the Great Kanto earthquake (7.9) happened.

Japan was the perfect place for a new graduate to figure out the path ahead. It was safe, clean and interesting, and the pay was excellent, and it made me a better teacher for the students I taught English at schools in New York City.

Have you ever returned to Japan?

I’ve gone back twice. My son came with me when he was 10 and attended elementary school for a day in my old town. While there I was “adopted” by the family of two of my students whose mother had done a homestay trip to Arkansas 20 years earlier. She wanted to return the kindness she had experienced in the U.S. Her daughters have visited me in Cold Spring twice and are now mothers themselves. I hope to host to host their daughters here someday.