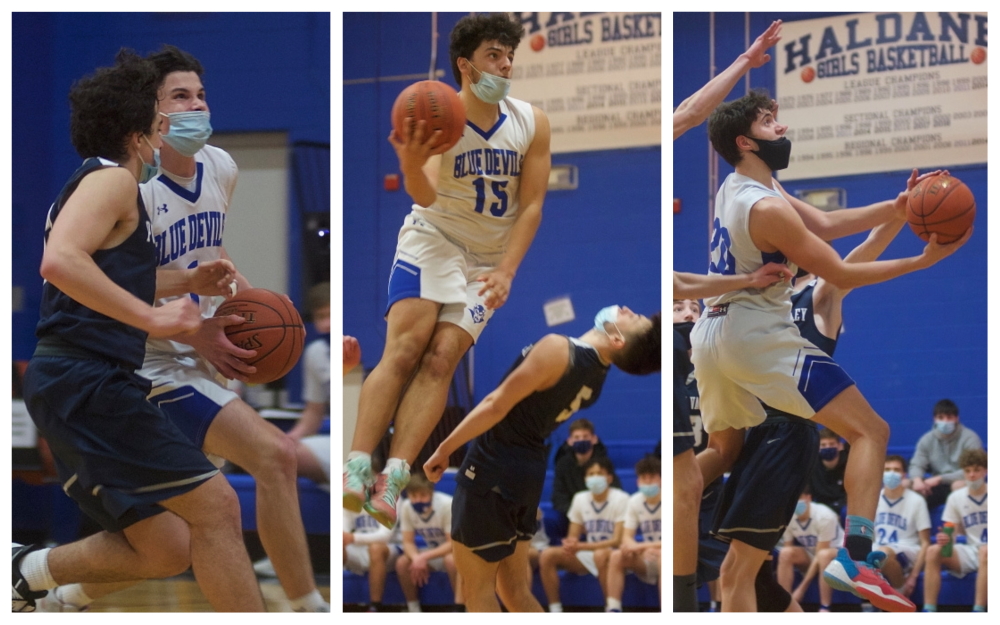 The run by the undefeated and top-seeded Haldane boys’ basketball team in the Putnam-Northern Westchester playoffs for smaller schools ended in a disappointing fashion on March 11 when it was upset at home by No. 5 Lakeland, 51-50.

With his team down by a point, 50-49, with 1.5 seconds left, a Lakeland player threw up a desperation shot from just inside the three-point line that banked in for the winning margin. A last attempt by the Blue Devils fell short.

What a crazy finish at Haldane. Lakeland scores in the final seconds on this basket. Refs put 1.5 back on clock but desperation heave at buzzer misses. Lakeland moves on to the PNW final pic.twitter.com/mxvmICJTZS

The top-seeded Blue Devils, who finished 10-1, had hoped to advance to the championship game. Instead, Lakeland went on to upset No. 2 Briarcliff (11-1) to win the title.

Playing at home, Haldane led Lakeland for much of the game, including by five points at halftime and seven points at the end of three quarters.

But the Hornets cut into the deficit in the fourth quarter and were down 50-49 when the winning shot was made with 1.4 seconds remaining. A shot by Haldane at the buzzer did not fall.

“That was an extremely difficult loss,” said Coach Joe Virgadamo. “We were the better team. But thankfully we had the game, and we had 11 games.”

“It felt good to have some fans there” after Section I officials allowed limited spectators, he said. “I’m super-proud of the team, the way they handled themselves and their intensity. Our rebounding was unbelievable against Lakeland; we outhustled them.”

“The offseason work will tell how good they can be,” Virgadamo said. “We have a lot of talent returning, and talent coming up. I thank everyone who made this season happen — the kids needed it more than we know, and it was a ton of fun.”

After being quarantined for the last 10 days because of exposure to an opposing player who tested positive to COVID-19, Haldane had reached the game by defeating No. 8 seed Putnam Valley (2-7) on March 10, 78-61.

Putnam Valley played the Blue Devils tough, and the game was tied at 42 with two minutes left in the third quarter.

But Haldane went on a 20-0 run, seemingly putting the game away with 6:50 left. The amazing stretch began when the Blue Devils hit a three coming out of a time-out. Holmbo then scored for a five-point lead. Moments later, Holmbo was fouled on a three-point attempt and was awarded five free throws after a Putnam Valley player was called for a technical foul.

He drained four of the five, and the Tigers were stunned.

But the Blue Devils then took their foot off the gas, and the Tigers clawed back to make it a six-point game (67-61) with 2:50 left.

After a time-out, Haldane regained its composure.

“We got a lot of confidence going up 20,” said senior captain Dan Santos. “But then there was a bit of sloppiness. We’ve been in quarantine, so yesterday was the first day we could practice. They shot pretty well, better than when we’ve played them before.”

Cervone scored a career-high 31 points to lead the Blue Devils.

The Beacon boys’ team, seeded No. 6 seed in the Dutchess County tournament, lost its quarterfinal game on Wednesday to No. 3 Lourdes, 83-50.

“Lourdes shot unbelievable,” said Coach Scott Timpano. “They had 11 three-pointers. They’re a huge and physical team and we had trouble matching up.”

He said the Bulldogs (1-12) didn’t have the win total they would have liked. “In a year when we knew the team was young, and we weren’t able to build our schedule and build our team, I feel for the seniors,” he said. “But the young guys got to see what it takes to win at the varsity level.”

The Haldane girls’ team knew it faced a tough matchup in Wednesday’s quarterfinal in the Putnam-Northern Westchester small school playoffs. Seeded No. 8, the Blue Devils would have needed a huge upset to topple No. 1 Walter Panas.

The Panthers took control early on their way to a 69-20 victory.

The Blue Devils (1-10) lost to Panas by one point last season, and Coach Jessica Perrone felt her team could be competitive, “but they hit three fast three-pointers and were hitting shots early.”

Maddie Chiera and Ruby Poses each had six points for Haldane, and Chloe Rowe added four.

“We were lucky to get through the season with no quarantine and no sickness,” Perrone said. “We felt the effects of having no preseason, but I was glad we got the seniors [Essie Florke and Sydney Warren] some kind of season.”

The Beacon girls closed their season on Wednesday at Ketcham, falling 76-42 in the first round of the Dutchess tournament.

The Bulldogs (2-9) lost to the Indians on a shot at the buzzer on Feb. 27, but Coach Christina Dahl felt her team suffered from nerves in the tournament matchup

“We needed more mental toughness to be able to control a game in a pressure situation,” she said. “We were in double figures in turnovers, so we struggled with that.”

Overall, however, “this season was a great experience for them,” she said. “It allowed them to compete with some of the best teams in the area. There was no lack of effort, although maybe some lack of confidence and experience.”