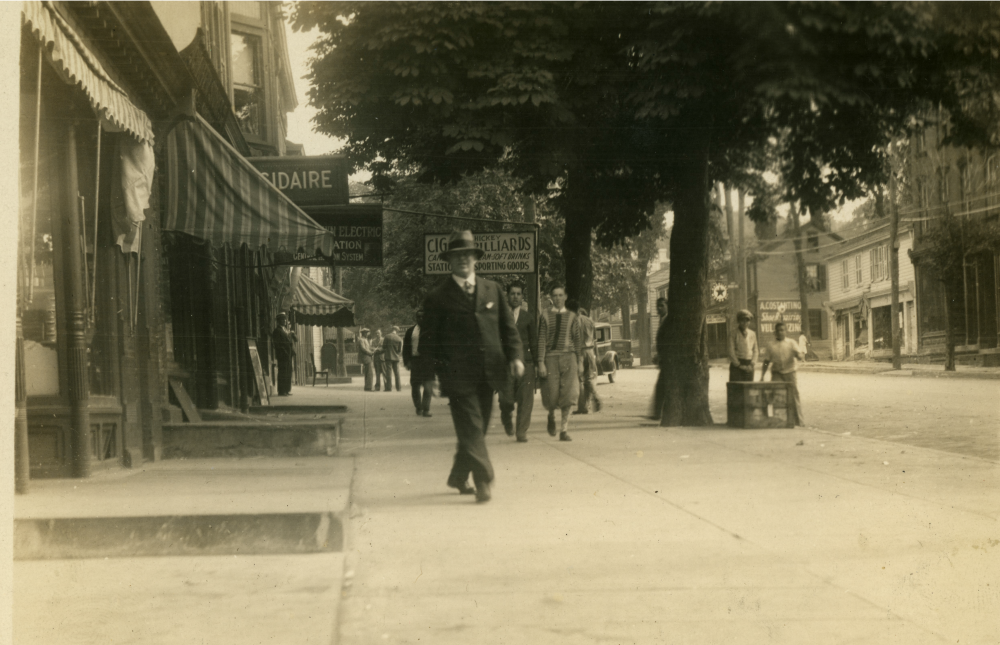 It was a special and adventurous time for me growing up in the village of Cold Spring in the 1930s and 1940s.

My first memories are centered at the first house my family occupied after I was born. I was brought home from Butterfield Hospital to a little brick house about a half block from the mighty Hudson. The house still exists and whenever I go to Cold Spring, I drive by it to fire up the memory box.

As I reflect on my childhood, I can’t help but think how fortunate and blessed I was to spend my early years in Cold Spring. That conclusion, of course, was reached by comparison to the world that developed after leaving the village. Life was simple, sincere and secure, an aura that would fizzle as my world increased in its complexities.

My family eventually moved to a three-story building on Main Street. My father, John Bonacio, had a tailor shop and dry-cleaning business. Most all of the village residents frequented his store; some of the more notables were Hamilton Fish Sr. and Jr. and Robert Patterson, who at the time was the U.S. undersecretary of war under President Franklin D. Roosevelt.

Our house was a block from the New York Central Railroad station. My friends and I would visit Mr. Tierney, the station master, regularly. He always found time to speak with us, which was typical of most everyone in the village. The Depot Restaurant now occupies the site of the former depot. Trains traveled night and day, leaving behind dense smoke pockets since most engines were coal-fired. The loud railroad noises interrupted everyone’s sleep for miles around.

Main Street in Cold Spring was always the hub of activity. Cars and trucks traveled to and from the railroad and businesses were situated primarily on Main Street. East of the depot was the movie house and Charlie McConville’s bar. There was the post office, Burns Restaurant, The Putnam County News, Sam Sunday’s barber shop, Elliott Hammond’s grocery, the A&P grocery, Cold Spring Lumber and a Greek confectionary store that sold homemade ice cream.

On the other side of the street was my father’s shop, Joe Jones Printing, the Grand Union on the corner of Main and Rock, the firehouse, the police department, the VFW, Percaccioro’s deli, Glick’s department store and McKeel’s hardware. There were many restaurants.

Our Lady of Loretto school and church was a short distance away. When Catholic students completed grade school, they matriculated to Haldane High School, which was equipped with all things applicable to a great education, as well as sports such as baseball, softball, archery, basketball, etc. It was a short, easy walk to the Butterfield Library and the Butterfield Hospital, which was small but well-equipped.

We made our own fun. The Hudson River was a major attraction and focal point. We would swim, fish, canoe or ice skate when the river froze over.

My mother, who was “courting” my father, and Mrs. Impellittiere, the mother of heavyweight boxing title contender Ray Impel, frequently walked across the frozen river to West Point to visit my father, when he was employed there.

Sitting by the river we would watch for the day liners cruising up from New York City. Two that I recall were the Alexander Hamilton and the Mary Powell. We often enjoyed picnics by the river and listened to music at the bandstand on weekends. Often we would take boat rides to West Point to watch the cadets parade, an awesome spectacle.

After supper, we would go outside until it got dark and play hide-and-go-seek, ring-a-levio, marbles, pick up sticks, jump rope, hopscotch and kick-the-can. Our park and playground was Kemble Field, where there were most always picnics and ballgames.

We spent many hours in the woods behind our house. The treehouses that we built were our treasured hideaways where we played games and read books.

My mother attended the old Haldane School, which was on Route 9D. It was later demolished; apparently it was too small for the growing number of people moving to the area.

There was a sand quarry on Route 9D with an extension over the railroad tracks to deliver sand to the trains when there was ice and snow on the rails. As part of our childhood excitement, we would climb to the top of the sand pile and slide down.

I am in my 80s now, and living in Fishkill, but I often drift into moments of nostalgia and revisit this wonderful village, which had become such a part of me. It will always remain the same for me as it was many years ago.

2 thoughts on “Reflections of a Cold Spring Native”