The Cold Spring Village Board on Tuesday (March 23) approved plans to review the operations and policies of the Police Department.

The seven-page document, posted at coldspringny.gov, was drafted in response to Gov. Andrew Cuomo’s executive order last year requiring municipalities to submit plans for “police reform and reinvention” by April 1.

The governor’s order came in the wake of killings of a number of unarmed people of color by police officers in New York state and other parts of the country.

Four board members voted to approve the plan. Trustee Heidi Bender cast the lone “no” vote. 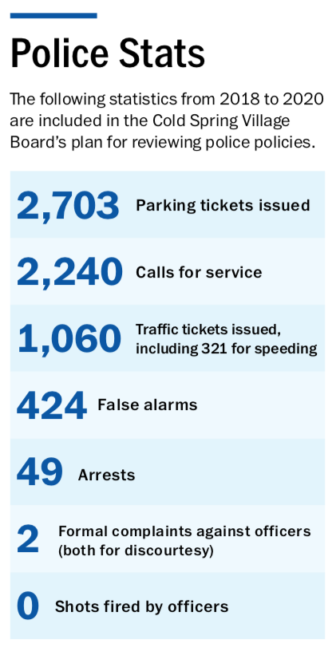 Cold Spring’s plan outlines a yearlong process which will include a village-wide survey and participation by a number of community stakeholder groups.

In addition, Officer-in-Charge Larry Burke and Trustee Kathleen Foley have been working with Lexipol, a law enforcement consulting firm, to update 47 policies that will released in stages as part of the public review process.

A 16-question survey was scheduled to be ready by Thursday (March 25) for residents to record their experiences with, and views of, the Cold Spring department. Residents will be notified of the link through the village email list and/or a postcard. They can also email [email protected] or call 845-265-3611, ext. 1, for the link or to request a paper copy or Spanish-language version.

The survey, which can be submitted anonymously, initially will be limited to village residents and business owners but later expanded to include visitors.

A public hearing on March 16 to receive feedback on the draft drew about 25 residents. Gretchen Dykstra applauded the inclusion of data from the past three years. “It is impossible to recruit, train and supervise police officers without knowing what the job entails,” she said.

She also urged the board to do more to make residents aware of significant police-related issues. Dykstra said a recent increase in “scam calls” reported to the Village Board by Burke was never communicated to the public. “Unused data are worthless data,” she said.

What is the Complaint Process?

Last month, Seth Gallagher, who served as Cold Spring mayor from 2009 to 2013 and is now a defense attorney, wrote to the Village Board asking that it review its process for handling complaints made about alleged police misconduct.

Gallagher said his teenage daughter and two of her co-workers were pulled over in the village in February 2020 by a recently hired officer for driving the wrong way on a one-way street. Gallagher cited a letter sent to the board in June by his daughter in which she said that the officer was immediately hostile, used abusive and profane language and threatened the driver after he opened the glove box that, if he did that again, he would “have a gun in your face.”

“The entire time we waited in the car I was close to tears and thought he would come back and hurt one of us, especially my boss in the passenger seat, who is Black,” she wrote.

Because the village does not have a police chief, Gallagher noted that the board is responsible for reviewing complaints and disciplining officers. He said that when he contacted Mayor Dave Merandy in September to follow up, he was told that the mayor had read his daughter’s complaint and admonished the officer. According to Gallagher, Merandy said the board would meet with him as a courtesy to a former mayor but that he didn’t see the point; and that the Police Benevolent Association, which represents the officer, had declined to meet with the board.

Gallagher told the board that he felt the village was creating a process that discourages complaints about officers or meaningful discipline, and excuses the board of its responsibility to assess and investigate complaints. He suggested the complaint process be addressed in the state’s mandated police policy review.

Neither Merandy nor Officer-in-Charge Larry Burke responded to an email requesting comment.

■ Mayor Dave Merandy reported that a stop-work order had been issued at 29-31 Rock Street after neighbors complained of heavy equipment being brought to the site. In January, the Historic District Review Board denied owner William McComish’s application for a permit to extend a driveway; days later, McComish sued the village in federal court, alleging his rights had been violated. Merandy said when Burke informed McComish he could not undertake any work, McComish said his attorney had spoken with the village attorney and work could proceed. “That was not the case,” Merandy said Tuesday. The equipment was removed after the stop-work order was issued.

■ Tots Park could reopen as soon as April 10, pending completion of maintenance tasks and COVID-19 safety measures being put in place.

■ Groups applying to use village parks for events are now required to submit a COVID-19 safety plan.

■ The board accepted the resignation of Officer Reece Aaronow, who took a position with the Dutchess County Sheriff’s Department.

■ Cold Spring has been named a Tree City USA by the Arbor Day Foundation “in honor of its commitment to effective urban forest management.”