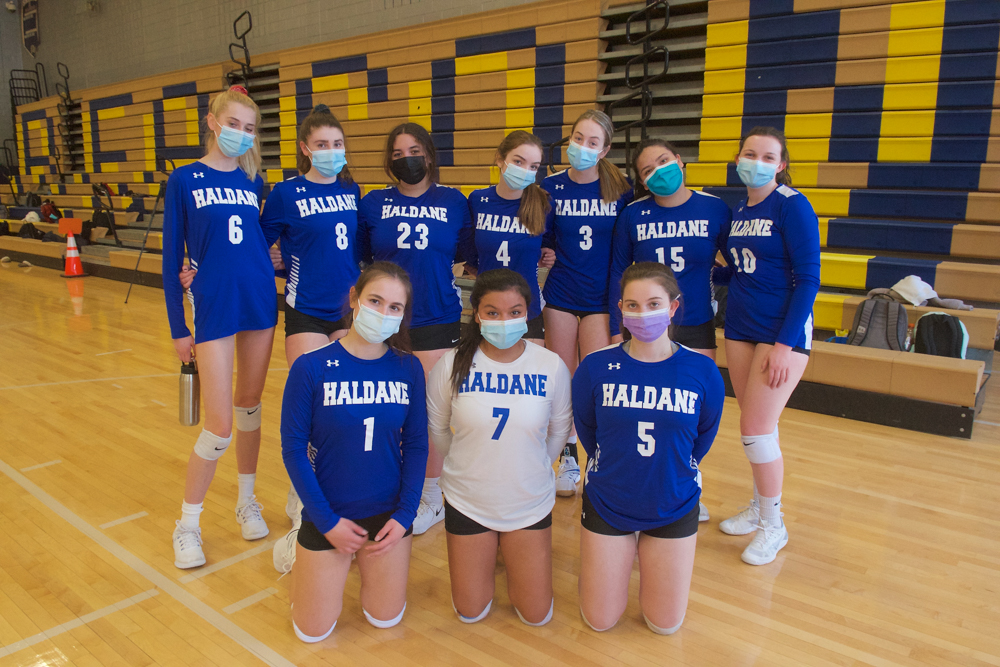 The Blue Devils took care of Peekskill, 3-0, on Monday (March 22), defeated Beacon, 3-0, on the road Tuesday and blanked Peekskill again on Wednesday.

“All three sets were close, and we didn’t play our best,” said Coach Kristina Roling, who took over this year from Kelsey Flaherty, of the second win at Peekskill. “They have a player who can rip it up, but the girls never gave up.”

At Peekskill on Wednesday, Megan Farrell had 14 digs and Maria Barry had 13, while Meghan Tomann scored five aces.

At Beacon, the Blue Devils controlled the match from the start. “I was impressed with the way the team was so fired up,” Roling said. 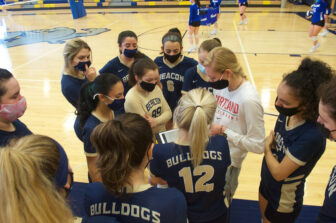 The Bulldogs had a tough time against Haldane, which is off to a 5-0 start.

Roling moved to the Highlands with her husband from Tennessee, where she also coached volleyball. But Haldane is her first head coaching job.

“I didn’t know what to expect,” she said. “A lot of the girls have experience in club volleyball, and that helps us a lot. But we also have players with no experience, so there’s quite a range. We’ve had very little practice time, but, at our full potential, we can be like a wrecking ball.” 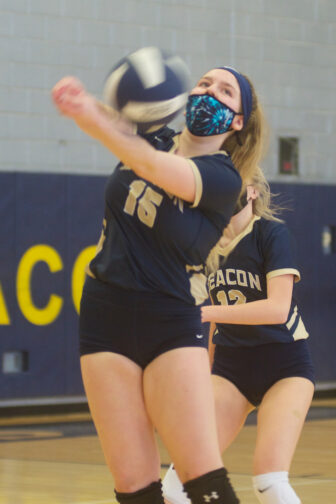 “Our sophomores are also doing an excellent job shaking the nerves and playing well,” the coach said. “I’m so excited about this team.”

Haldane is scheduled to host Croton at 11 a.m. on Saturday (March 27), travel to Croton on Monday and host Pawling at noon on Wednesday.

Along with its loss to Haldane, Beacon has fallen twice to Arlington and twice to John Jay for an 0-5 start.

“They’ve been putting in the time and effort in practice,” said Coach Ron Pagliaro. “The record is not what we want, but the girls are very happy we have a season.” 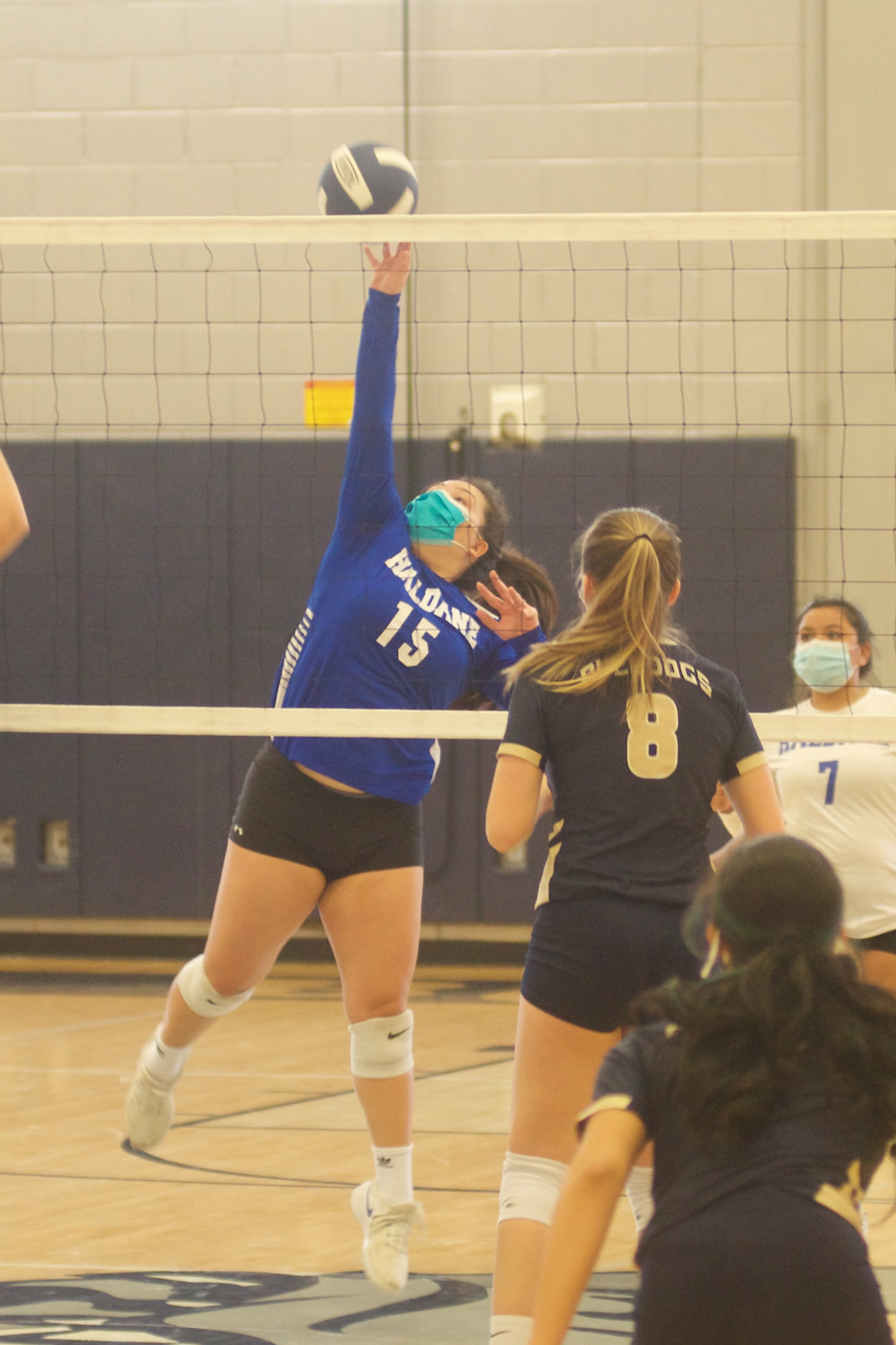 Rachel Iavicoli (15), a senior, is a veteran on the Haldane team.

“Lejdina, Kim and Brianna have been solid players for us for some time,” Pagliaro said. “We’re hoping to build for the juniors. Hopefully we get some momentum and they can realize how good they can be.”

Beacon is scheduled to host Ketcham at 10 a.m. on Monday (March 29) and then visit Ketcham the next day.

Coach Ryan McConville said his Haldane team played well at times in its season opener at Dobbs Ferry, but fell 50-26.

“We missed three golden opportunities to score in the first half that could have changed the complexion of the game,” he said. “They also got a pick-six [an interception returned for a touchdown] and recovered an onside kick.”

Senior Darrin Santos rushed for 111 yards and a pair of touchdowns on 10 carries and returned a fumble 70 yards for the game’s first score. At quarterback, Dan Santos completed 11 of 19 attempts for 139 yards, including a touchdown to Doug Donaghy. He was intercepted twice.

“Darrin had a great game offensively and he was huge on defense,” McConville said. “To go over 100 yards in the first game was great. Julian Forcello and Soren Holmbo also played well, and Josh Reyes had an interception that led to a touchdown.”

He said there “were some nerves” but also “a lot of enthusiasm and excitement. The whole team had a lot of fun.”

Haldane is scheduled to host Blind Brook at noon on Saturday (March 27).

Beacon, meanwhile, traveled to Brewster on March 20 for its opener and fell to the Bears, 46-0.

Despite the score, quarterback Jason Komisar “made some good decisions and tried to make plays,” said Coach Jim Phelan. “Brewster’s defensive ends were outstanding; they shut us down. We have a lot of guys who are getting their first varsity action, and some who are playing football for the first time.”

Komisar completed 9 of 16 attempts for 28 yards and ran for 21 yards on eight carries. Jamal Jackson and Cody Shields each had three receptions. Louis DelBianco led the defense with seven tackles, and Jackson had a fumble recovery.

The Bulldogs are scheduled to host Tappan Zee today (March 26) at 7 p.m.