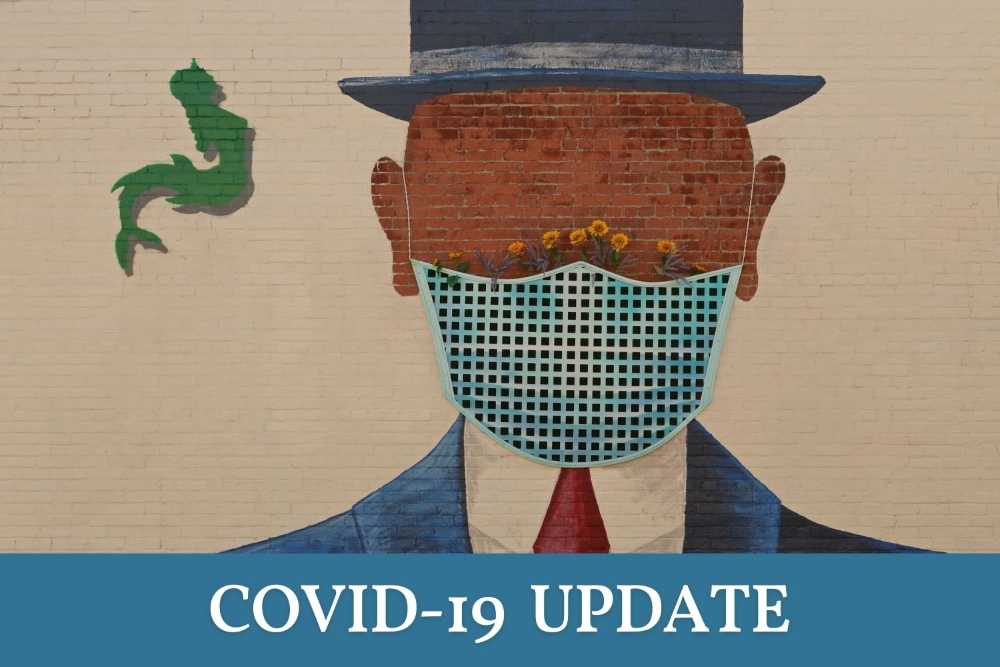 Infection numbers jump from 17.5 to 24 percent over February

■ Mid-Hudson Animal Aid in Beacon reopened to the public on March 24, with adoptions and volunteering by appointment only and social-distancing and mask requirements. Email [email protected]

■ Nursing homes can now allow visitors at all times, except for unvaccinated residents in areas with a high number of COVID-19 cases and lower vaccination rates, or residents who are infected or in isolation or quarantine, Gov. Andrew Cuomo said on March 25. Cases have fallen more than 80 percent since peaking in mid-January during the  post-holiday second wave of the pandemic, said Cuomo.

■ Banks, creditors and debt collectors have been notified that the $1,400 stimulus checks being sent to people under the American Rescue Plan Act are exempt from garnishment under New York state law, Attorney General Letitia James said on March 24. Banks are also prohibited from seizing the payments to recoup debts owed to them, said James.

■ The state, in partnership with Cornell University, is launching a free eight-hour, 16-session online Citizen Public Health Training Program for residents who would learn about how to prepare for and respond to public health emergencies and volunteer in their communities. “It gives you a sense of knowledge, gives you a sense of control, and puts you in a position to protect yourself and your family and your neighborhood, and, God forbid there is another emergency, you can volunteer to help,” said Gov. Andrew Cuomo on March 24. Information on the program can be found here.

■ New York has its first confirmed case of the more-contagious Brazilian variant of the virus that causes COVID-19, Cuomo said on March 20. The case, involving a Brooklyn resident in their 90s with no travel history, was identified by scientists at Mount Sinai Hospital in New York City, said Cuomo.

■ With the Beacon school district expanding in-person instruction to four days in April, the city’s Department of Parks and Recreation is accepting registration for its after-school program. The program will operate from dismissal to 6 p.m. Visit the program’s webpage for information and to register a child, email [email protected] or call 845-235-4202.

■ The Centers for Disease Control and Prevention said on March 19 that 3 feet is sufficient for social distancing in elementary school classrooms where mask-wearing is “universal,” regardless of COVID-19 levels in the surrounding community. The same distance is sufficient in middle and high schools when community transmission is “low, moderate, or substantial,” but 6 feet should be required in those schools when transmission is “high” unless students are grouped in cohorts during the day, said the CDC.

■ Commercial landlords in New York City, Buffalo, the Capital Region, Rochester and Syracuse will provide space for the regular testing of their tenants’ employees under the state’s New York Forward COVID-Safe Offices initiative, Cuomo said on March 19. Eight office-building owners in the city and 13 in the other areas of the state have committed to the program, said Cuomo.

■ Marist College in Poughkeepsie has put students in its Champagnat and Marian residence halls under quarantine and is restricting outside gatherings, suspending Division I athletics and instituting other measures in response to an uptick in COVID-19 cases, school officials said on March 17. Classes in-person will continue, and cases at the school are below the threshold that would require remote learning, said officials. The restrictions are in place through 2 p.m. on March 23. The school has had 158 total cases for the spring semester and 151 active cases as of March 18, including 66 on-campus.

■ Dutchess residents at risk of being evicted can call the United Way of the Dutchess-Orange Region’s 211 helpline, or 800-899-1479, County Executive Marc Molinaro said on March 18. Staff can provide tenants with a list of programs they are eligible for or, if needed, refer them to Legal Services of the Hudson Valley. Tenants needing help can also answer questions using an online tool and receive a call back from 211.

■ Indoor fitness classes can resume at 33 percent capacity beginning March 22, with health screening and contact information required at sign-in, Cuomo said on March 17. In addition to requiring that owners clean and disinfect between sessions, the state is mandating that local health departments inspect businesses before they open or within two weeks after they open.

■ Effective March 22, the state is lifting yellow-zone cluster designations for Newburgh, New Windsor, the East Bronx, West Bronx, Manhattan and Kew Gardens/Forest Hills in Queens. Those areas had been under additional restrictions because they had high numbers of COVID-19 cases. 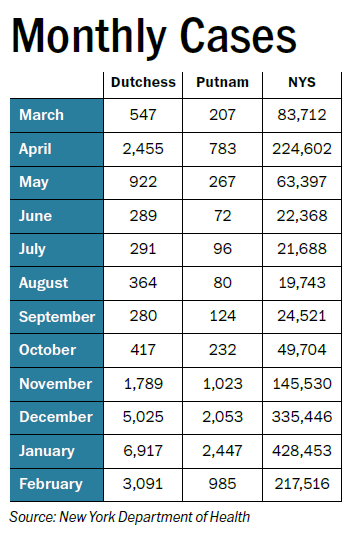 ■ Beginning April 5, the current 11 p.m. curfew for billiard halls, bowling alleys, casinos, fitness centers, gyms and movie theaters will be lifted, Cuomo said on March 17. The 11 p.m. curfew for food and beverage establishments and the 12 a.m. curfew for catered events will remain in effect.

■ The state Department of Education on March 15 adopted emergency regulations to cancel the Regents exams in August and, if the federal government does not grant a full waiver of testing requirements, to give limited 3-8 assessments and Regents exams in only four subjects — Algebra, Earth Science, English language arts and Living Environment — in June. The emergency revisions take effect on March 16. The Board of Regents will vote on permanent adoption at its June meeting. If the federal Department of Education grants New York a waiver, all assessment tests and the June Regents exams will be canceled along with the August Regents.

■ The Quest Diagnostics locations in Peekskill, White Plains and Kingston are now booking appointments for rapid COVID-19 tests, which return results within 30 minutes. Cuomo said 26 new rapid-testing sites are opening over the next week to aid businesses as the state loosens pandemic restrictions on venues that, in some cases, requires that people attending events test negative. Testing locations can be found here.

■ Travelers entering New York from other states or from U.S. territories will no longer have to quarantine for 14 days, Cuomo said on March 11. The state still recommends that people quarantine, and they must still complete a Traveler Health Form. The quarantine requirement remains in place for international travelers.

■ Cuomo on March 9 signed legislation protecting small businesses with fewer than 50 employees and landlords with 10 or fewer units from evictions and foreclosures. Cuomo also said that he has reached agreement with the state Legislature on a bill to expand the protections to businesses with 100 or fewer employees, and to any business with 500 or fewer employees whose in-person operations were ordered close for two or more weeks between May 15, 2020 and May 1, 2021.

■ Vassar Brothers Medical Center in Poughkeepsie began allowing patients to have limited visits starting March 9 because of declining COVID-19 cases. Patients without a suspected or confirmed infection are allowed one visitor a day for up to four hours between 2 p.m. and 6 p.m. Visitors have to remain in the patient’s room and follow personal protective equipment guidelines. The full visitation policy can be viewed at patients.healthquest.org.

■ The Haldane school district, which has been operating under a hybrid model, will reconvene members of its School Reopening Task Force to explore having more high-school students regularly attend classes in-person, Superintendent Phil Benante said in an email to parents on Friday. The task force will also examine how classrooms and other spaces within each school can be adapted to the most recent guidelines from the Centers for Disease Control and Prevention and the state Department of Health, said Benante. 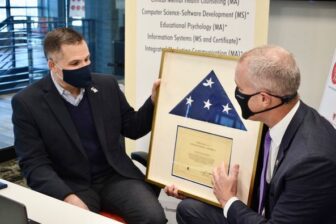 During a Zoom town hall on March 5, U.S. Rep. Sean Patrick Maloney presented Dutchess County Executive Marc Molinaro with the flag that flew over the U.S. Capitol to honor his father, Anthony Molinaro, who died of COVID-19 on April 10.

■ Essential workers and first responders are eligible for up to $1,000 in reimbursement for child care, housing, transportation and other expenses through the state Office of Children and Family Services’ Empire Pandemic Response Reimbursement Fund program. Households earning up to 500 percent of the federal poverty level, $125,470 for a family of four, are eligible to apply. Workers should be referred by employers, unions or social service providers who can verify employment during the COVID emergency.

■  Beginning April 2, event, arts and entertainment venues can reopen at 33 percent capacity, with up to 100 people indoors and up to 200 people outdoors, Cuomo said on March 3. Venues can increase capacity to 150 indoors and 500 outdoors if all attendees give proof of a negative COVID-19 test before entering. Venues will still need to require masks and social distancing.

■ Travelers to New York who have been fully vaccinated no longer have to quarantine or test out within 90 days of their full vaccination, said Cuomo on March 3.

■ Putnam County Executive MaryEllen Odell said on March 3 that she is canceling her “State of the County” address for the second straight year due to COVID-restrictions. The address, scheduled for March 11, was to be themed “2021, A Year of Hope and Health,” said Odell. The Legislature will still hold its special meeting planned for that day, said Odell. 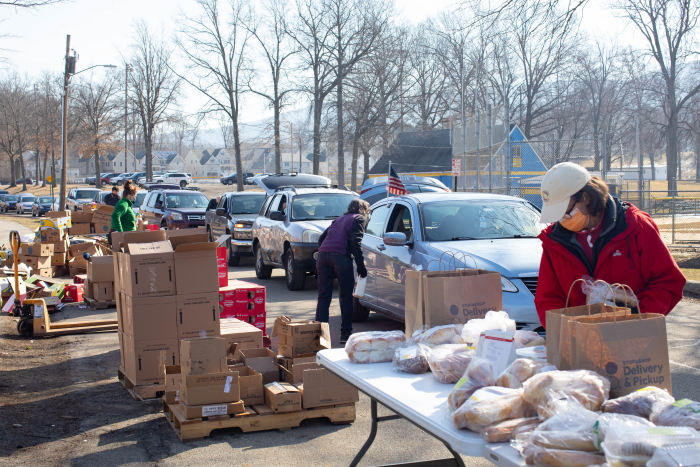 Mutual Aid Beacon has been distributing free groceries each week since the organization was created last year in response to the pandemic shutdown. (Photo by Meredith Heuer)

■ State Sen. Sue Serino is collecting new and used chargers for Android, Apple and Samsung phones to donate patients at local hospitals, in partnership with the organization 518 Powerup. Donations can be dropped off at Serino’s Hyde Park office, 4254 Albany Post Road, from 9 a.m. to 5 p.m., Mondays through Fridays, until March 12. Residents who want to donate can also call Serino’s Putnam Valley Office at 845-528-0417. “In a time where we feel more isolated than ever, being able to stay in touch with loved ones is crucial,” said Serino.