■ The VA Hudson Valley Health Care System began offering on Wednesday (March 31) vaccinations to the veterans’ spouses and caregivers at its walk-in clinics at the Castle Point and Montrose facilities. The clinics take place from 8:30 a.m. to 2:30 p.m., Mondays through Fridays. 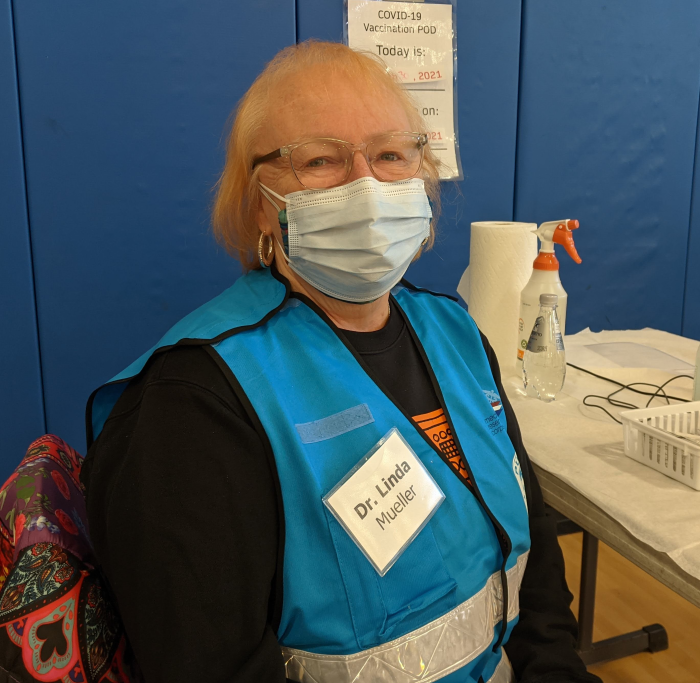 ■ New York residents 30 years old and over can begin booking vaccine appointments on Tuesday (March 30) and people 16 and over starting April 6, Gov. Andrew Cuomo said on Monday (March 29). The vaccine made by Pfizer-BioNTech, which is recommended for people 16 and older, is the only one available for those younger than 18.

■ A study of 3,950 people in six states conducted over 13 weeks found that two weeks or more after the second dose of the two-shot Pfizer-BioNTech or Moderna vaccines, the risk of COVID-19 infection was reduced by 90 percent, the Centers for Disease Control and Prevention said on Monday (March 29). The risk of infection was reduced by 80 percent two weeks after the first shot of either vaccine, said the CDC.

■ New York has launched its Excelsior Pass digital Wallet app, which residents can use to verify that they have been vaccinated or tested negative for COVID-19 at entrances to venues like stadiums and theaters, and events required by state guidelines to verify the virus status of attendees. The free app, developed by IBM, will be used at Madison Square Garden and at the Times Union Center in Albany beginning next week, and debut at other businesses in the coming weeks, Cuomo said on Friday (March 26). Residents need to opt in and download the app for Android or iOS. Businesses must also opt in.

■ New York exceeded 200,000 doses administered in a 24-hour period for the first time, Cuomo said on Thursday (March 25). More than 1 million doses had been administered over the previous seven days, he said.

■ New York Attorney General Letitia James joined with colleagues from other states in urging Facebook Chairman and CEO Mark Zuckerberg and Twitter CEO Jack Dorsey to crack down on the use of their platforms to spread vaccine disinformation. James and 11 other attorneys general, in a letter sent on Wednesday (March 24), said disinformation “is threatening the health of our communities, slowing progress in getting our residents protected from the virus, and undermining economic recovery in our states.” Zuckerberg, Dorsey and Google CEO Sundar Pichai are testifying on Thursday (March 25) at a U.S. House subcommittee hearing on misinformation. 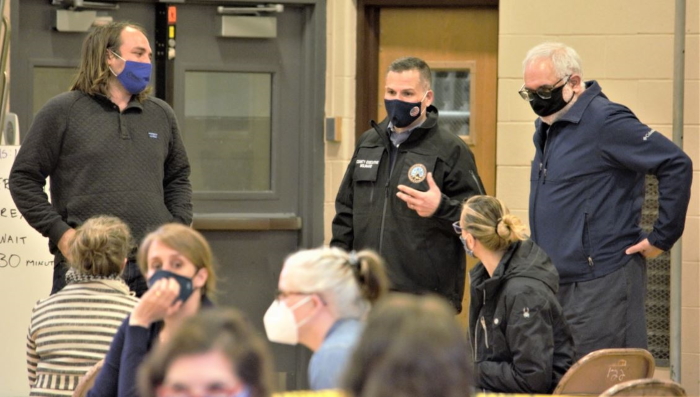 ■ New York expanded vaccine eligibility to people 50 and older as of Tuesday (March 23).

■ Drug World is seeking donations from businesses for a raffle to benefit volunteers for the pharmacy’s vaccination clinics. Gifts will be raffled at the end of each clinic. Businesses can bring gift cards or raffle items to Drug World, 55 Chestnut St. in Cold Spring, attaching a note addressed to owner Heidi Snyder with their name and indicating that the gift is for volunteers. “It truly takes an entire village to get this job done and our town vaccinated,” said Snyder. 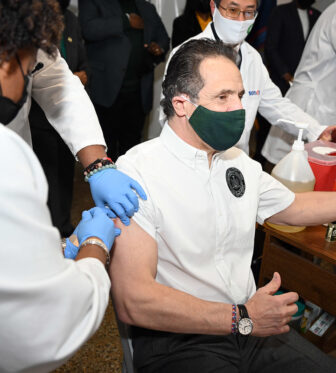 ■ Beginning March 15, the VA hospitals at Montrose and Castle Point began holding daily walk-in vaccination clinics for military veterans who are 55 and older and either an essential worker or have a qualifying underlying medical condition. Clinics will be held from 8:30 a.m. to 2:30 p.m., Monday to Friday. Anyone who wants to apply for VA health care can call 845-831-2000, ext. 215100 or ext. 203309.

■ Private and public employees are now granted up to four hours of paid leave for each vaccination appointment under legislation signed March 12 by Cuomo and taking effect immediately. Employers are prohibited from deducting the time off from other leave workers have earned or accrued.

■ President Joe Biden said in a primetime speech on March 11 that all states will be directed no later than May 1 to open vaccinations to all adults and that the federal government is working on building a website that will allow people to find the nearest available appointment. “No more searching, day and night, for an appointment for you and your loved ones,” he said.

■ New York is expanding the eligibility for vaccines to residents 60 and older, beginning March 10, and to government and nonprofit essential workers who interact with the public, beginning March 17, Cuomo said on Tuesday.

■ Hospitals and county health departments will be able to vaccinate anyone who is eligible, Cuomo said on March 9. Hospitals had previously been restricted to vaccinating health care workers and counties to essential workers, people with qualifying medical conditions and residents 65 and older. Pharmacies will continue to prioritize older residents 60 and older and teachers, said Cuomo. 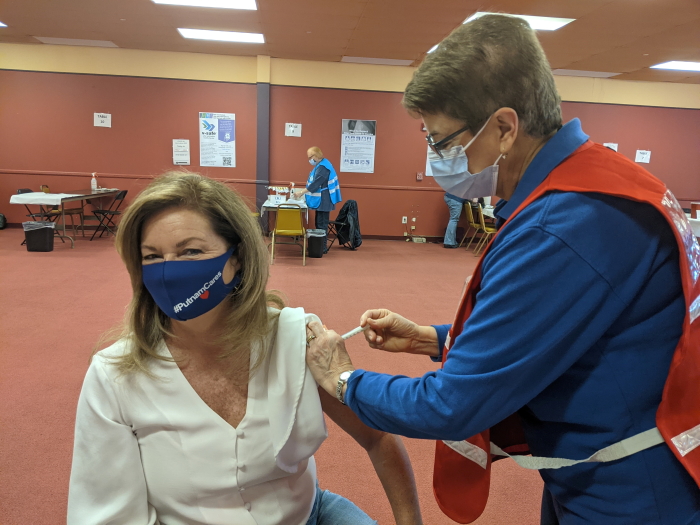 ■ New York plans to open two additional mass-vaccination sites in the Mid-Hudson Region and eight in other regions over the next few weeks, Cuomo said on March 8. In addition to the current site at the Westchester County Center in White Plains, the state will use SUNY Orange in Middletown and the Ulster County Fairgrounds in New Paltz for vaccinations, said Cuomo. The start dates have yet to be announced, but once they open, residents can find appointments at the state’s Am I Eligible website or by calling the vaccination hotline, 1-833-697-4829.

■ Under new guidelines issued by the Centers for Disease Control and Prevention on March 8, people who are fully vaccinated do not have to wear masks or social-distance during indoor visits with each other, or when visiting unvaccinated people in households where everyone is low-risk for severe illness; and are exempt from quarantining and testing if they have no symptoms of COVID-19 after being in contact with an infected person. A person is considered fully vaccinated two weeks after receiving the last required vaccine doses, according to the CDC, which still recommends that vaccinated people wear masks and practice social distancing in public. 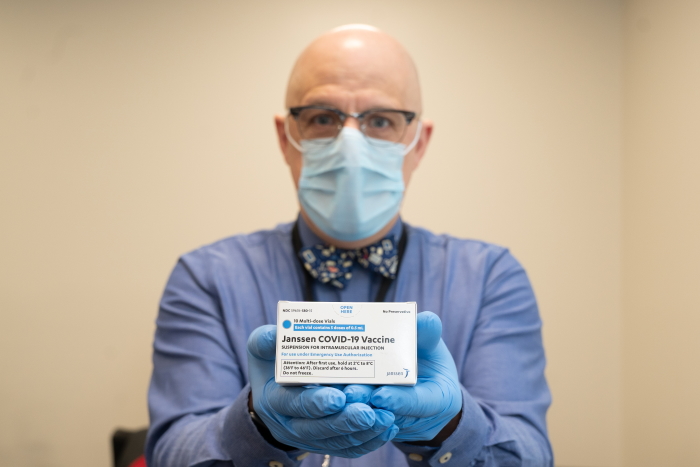 A short term mass vaccination site that utilizes the Johnson & Johnson vaccine opened on March 5 at Marist College. (Don Pollard/Office of the Governor)

■ Dutchess County is holding a “pop-up” vaccination clinic on March 10 at John Jay High School in Hopewell Junction, in collaboration with the towns of East Fishkill, Fishkill and Wappinger. The time is still to be determined.

■ Dutchess County is forming a vaccine equity coalition “to ensure equitable distribution” of the COVID-19 vaccines “in underserved communities,” County Executive Marc Molinaro announced on March 3 during his weekly Facebook town hall. The coalition will include the the City of Poughkeepsie and other local stakeholders, according to the county.

■ Putnam County posted a link on March 3 afternoon where seniors can book appointments for the county’s first clinics designated solely for residents 65 and over. Appointments can be found on the county website at putnamcountyny.com. Appointments are for Thursday (March 4) and Friday (March 5) in Brewster.

■ The state-run mass-vaccination sites at the Javits Center in Manhattan, Yankee Stadium in the Bronx and the New York State Fairgrounds in Syracuse will temporarily administer vaccines 24 hours a day due to the first shipment of Johnson & Johnson’s one-dose vaccine, Cuomo said on March 3. New York is receiving an initial allocation of 164,800 doses. Appointments can be made at the state’s Am I Eligible website. “After that first tranche of Johnson & Johnson, the production is actually going to slow and lag and then build back up again,” said Cuomo. 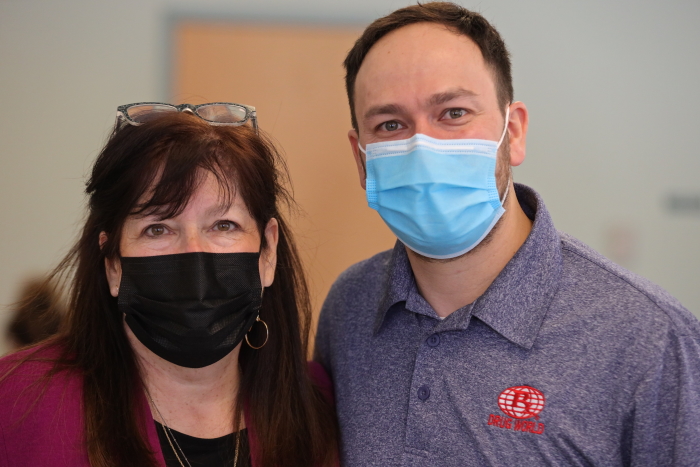 Heidi Snyder, who owns Drug World of Cold Spring, with her son, Mark, at a vaccine clinic in Philipstown on March 5. (Photo by Ross Corsair)

■ New York City will receive 71,100 doses and the rest of the state 93,700 doses this week from the initial shipment of Johnson & Johnson’s vaccine, which on Feb. 27 joined Pfizer-BioNTech and Moderna as the third drug to receive emergency use authorization under the country’s COVID-19 inoculation program. While the other two vaccines require two shots per person, the one made by Johnson & Johnson requires a single-dose drug.

■ Putnam County is receiving 1,170 Pfizer-BioNTech doses to administer to residents 65 and older as the state expands its vaccine program with clinics designated for seniors. Putnam had requested 3,000 during a call with state officials on Friday (Feb. 26) about the expansion, which is supposed to start this week. Counties were asked to specify how many of the Pfizer vaccines they could store at sub-zero temperatures and administer within seven days, County Executive MaryEllen Odell said. Putnam has freezers capable of storing 6,000 doses at below-freezing, the county said.