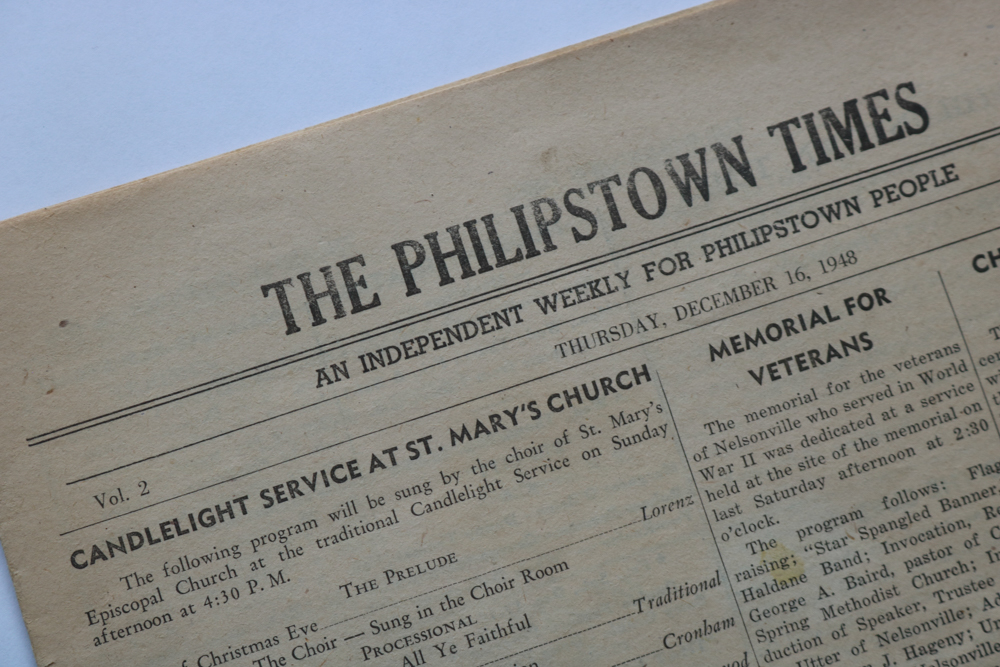 The short life of The Times

As the “news desert” in the country expands, more than 200 counties in the U.S. no longer have a single local newspaper, and 1,449 have only one. So it’s highly unusual that Cold Spring, a village of barely 2,000 souls, has two weeklies, including the one you’re reading and The Putnam County News & Recorder, which was founded in 1866.

But it isn’t unique. It’s just journalistic history repeating itself.

John Jesek, an avid reader of The Current, recently lent me a copy of the Dec. 16, 1948, issue of The Philipstown Times, a weekly that was published every Thursday at 59 Main St., an address that apparently no longer exists.

The Times’ history is murky. Based on the volume and issue number, the first issue was published in October 1947 by editor Joseph F. Jones. His grandson, Ray Jones, who lives in Cold Spring, told me he remembers watching the press removed from the Main Street shop in either 1949 or 1950, when he was 5 or 6 years old.

When Joseph Jones established The Times, the PCNR had already been around for 81 years. I can’t help but wonder what prompted him to start a paper. The eight-page issue I perused doesn’t yield any clues but does provide a fascinating snapshot of a week in the village in the years immediately after the end of World War II. 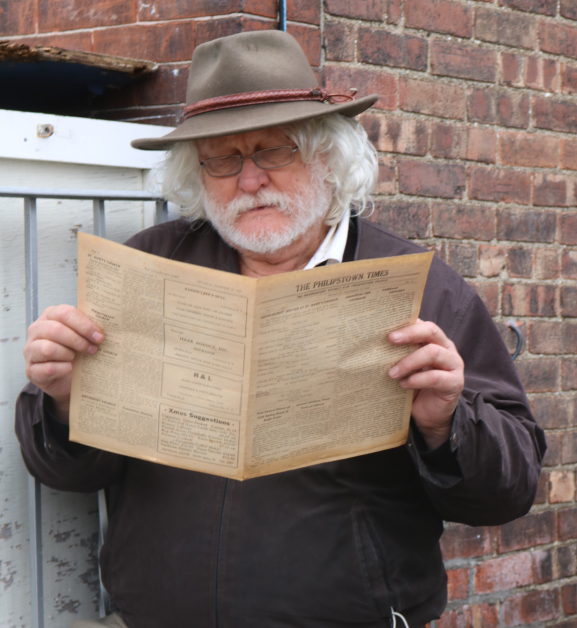 Mike Turton reads The Times outside what used to be 59 Main St. (Photo by Mike Cullinan)

The lead story on the front page describes the dedication of a monument to honor the 54 Nelsonville residents who served in the war, including two who were killed, Martin Adams and Arthur Warren. Joe Etta, who died last year at age 102, led the squad of veterans at the ceremony.

The ads say as much about life in the village as the news coverage. In this issue they paint a picture of a village flush with eateries and watering holes, including Rose’s Luncheonette (120 Main), Collins Restaurant & Bar (187 Main), Zahners Bar & Grill (129 Main), The Short Snorter Bar (1 Bank St., now Downey Energy); and Burns’ Restaurant (80 Main, now The Pink Olive).

Village Taxi tried to make a go of it in Cold Spring in 2016. In 1948, three village taxi services, operated by S. Warren, John Valentine and Owen Devine, advertised.

Moviegoers had six films to choose from at the Hudson Theatre at 50 Main St. (later the Bijou Theater and Bijou Galleries), including That Lady in Ermine, starring Betty Grable and Doug Fairbanks. It also featured a free Christmas screening for children of Laurel and Hardy’s Sons of the Desert — not exactly a holiday favorite, but you get what you pay for.

Death was a steady business, as always, with two funeral homes promoting their services: Coleman Funeral Home at 4 Rock St. and W.A. Scullion at 30 Morris Ave.

Possibly related, among the gift suggestions from Glick’s Department Store was an “Xmas-packed” carton of cigarettes for $1.79. 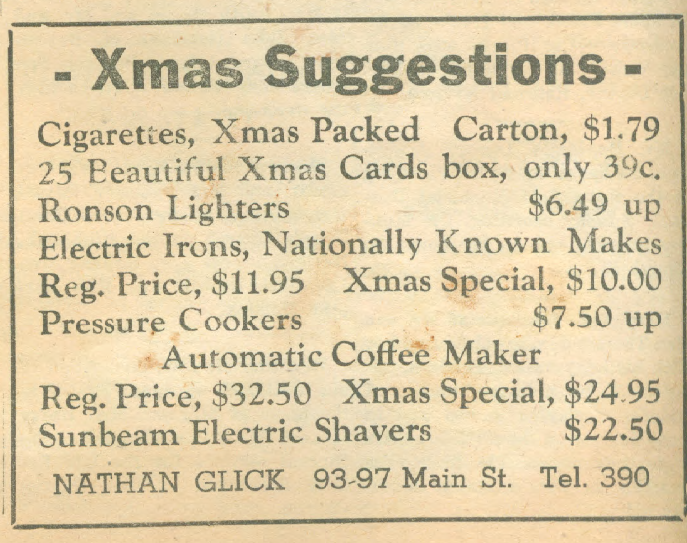 A column entitled “Do You Remember When?” asked readers if they recalled Dink Ladue when he was employed at the livery stable owned by Leonard Jaycox on Stone Street.

The Times ran editorials on significant issues. In this edition, Jones lamented that automobiles driven by gawkers were getting in the way of Cold Spring’s firefighters. He noted “many complaints about motorists who cannot refrain from driving to the fires ahead of the firetruck.”

Other items appear somewhat randomly. This news must have been the talk of the town: “Did you hear the Arthur Godfrey show Tuesday morning? He read a letter sent in by Mrs. Viola Rundell of Garrison Road, Cold Spring.”

The Holy Name Society of Our Lady of Loretto announced it would hold “another boxing smoker on Feb. 8.” A year earlier the society had hosted 10 bouts with sandwiches and refreshments. The Holy Name boxing team trained at Loretto Hall three times a week. Hopefully, they didn’t turn the other cheek.

In addition to the Nelsonville war monument, other front-page news included an account of a dinner hosted by the Cold Spring Drum and Bugle Corp at Scalzo’s Restaurant, with “the girls of the minstrel troup” as guests of honor.

A short article noted that, to raise money for the yearbook, Haldane would host a basketball game between members of the Cold Spring and Beacon Lions clubs —played on donkeys.

Another incident, reported in excruciating detail, must have caused many a gasp.

At the corner of Main and Kemble, “a patent-medicine salesman endeavored to give a demonstration of how good his wares were, stating it would cure a burn immediately and placed a hot soldering iron on his tongue and removed practically all the skin from that delicate organ,” the paper reported. “He had forgotten to dip the iron in a solution that would prevent such as accident.”

For more information on The Philipstown Times you can phone 368, though you may have to leave a message. A single issue will cost you a nickel. An annual subscription is a much better buy at $2.

The original post reported that Burns’ Restaurant was located at 76 Main St., now Le Bouchon. After further sleuthing, we determined that it was actually at 80 Main St.

Also, while John Jesek shared the issue of The Philipstown Times with reporter Michael Turton, he borrowed it from Jinny Nobile, who deserves credit for its preservation and who said she plans to donate it to the Putnam History Museum in Cold Spring.

In fact, if you have issues of The Times, The Philipstown News, The Cold Spring Recorder, The Cold Spring Journal or other newspapers, consider donating them to the museum. Even many early issues of The Putnam County News & Recorder are missing from its collection. In Beacon, the historical society has a run of the Beacon News from 1924 to 1940 plus scattered issues of the Evening News, Light, Free Press, Daily Herald, Journal, Daily Gazette and Matteawan Evening Journal. Newspapers are invaluable, as has been said, as “the first draft of history.”