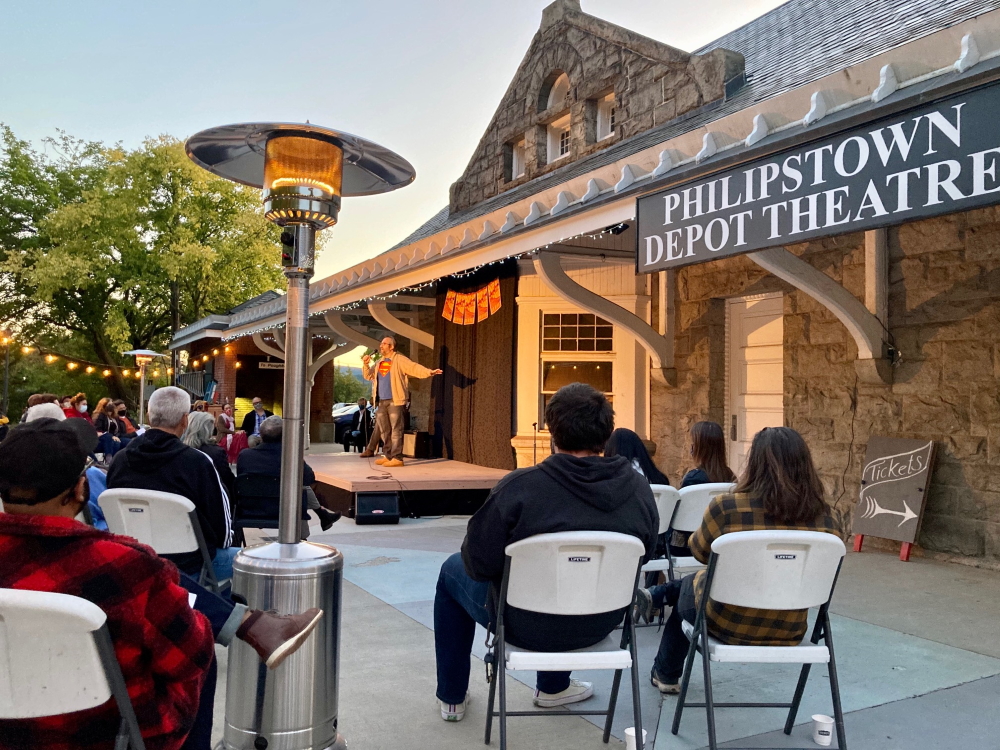 Despite lingering restrictions on indoor performances because of the ongoing pandemic, the Philipstown Depot Theatre is going to make an attempt to stage live performances in April, May and June.

On Garrison’s Landing, the Depot Theatre will again stage performances in the patio space behind the former railroad building. Seats will be distanced, masks required and the audience limited, and there will be a limit of two tickets per person, said Ned Rauch, a representative for the theater.

The Depot is “paying close attention to the changing guidelines set by the governor’s office, and shifting accordingly,” he says. “It’s quite a lovely performance space, with the stage tucked into the long side of the theater, and the chairs arrayed around it — it’s rather festive, especially with the patio lights on.”

The first event will be the Aery Theater Co.’s annual one-act play festival on Friday (April 9) and through the weekend. This year’s theme is “So Over COVID.” The plays were selected during earlier elimination rounds performed virtually; three of the six finalists will be performed on Friday, three on Saturday and the finalists in encore performances on Sunday, with one crowned the winner. Tickets are $15 at philipstowndepottheatre.org.

The performers also will discuss their experiences with dance during the pandemic and invite members of the audience to learn movements from the pieces.

Next up will be a reading of a new musical comedy-fantasy, The Scream, in which a reclusive couple steals the Munch masterpiece only to find the image haunting them. Written by Raymond Bokhour, Simon Grey and David Bridel, and directed by Christine Bokhour, it will be presented on April 30 and May 1.

In May, the Putnam Theatre Alliance will debut a series, The Freedom Project, that pairs thematically connected historic and new plays. The Night Train storytelling series returns on May 22 and May 29, hosted by Joe Charnitski and featuring Debbie Goddard, Kalista Parrish and Ron Sopyla, along with live music.

On June 5, Goldee Greene and Tom McCoy of Philipstown are scheduled to perform a program of cabaret songs, and on June 11 and 12, short plays by Gabrielle Fox, Samuel Harps and K. Lorrel Manning — collectively titled Tales from the Other Pandemic — will be onstage.