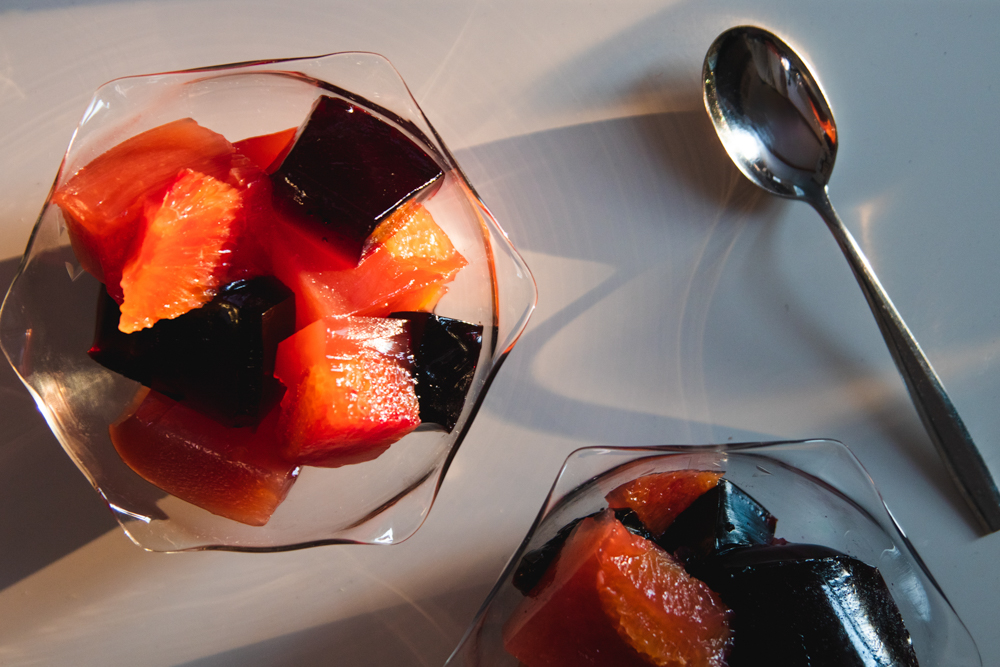 In what may be the most Midwestern thing I’ve ever done, I once brought Jell-O to an elegant Easter gathering.

This was about a dozen years ago, and to be fair, it was not actually Jell-O but rather supremed slices of tangerine and blood orange gently suspended in a sunrise-hued mixture of Sauternes, citrus juice and plain Knox gelatin.

The recipe was inspired by Alfred Portale, a top chef from an era when a person’s primary qualification for that moniker was actual top-tier cheffing rather than trumpeting one’s cheffy opinions on TV. In Alfred Portale’s 12 Seasons Cookbook, he calls this dish a “terrine,” describes it as “a stunning dessert” and includes it in a holiday menu that also features lobster, salmon and morels. It was he, in other words, who gave me the courage to present something so potentially déclassé at an elegant feast.

To the guests gathered at my aunt’s Easter table, however, my dish looked like Jell-O. For that, I blame Orator Woodward, the man who in 1902 marketed a blend of sugar, gelatin, adipic acid, disodium phosphate, fumaric acid, artificial color, natural flavor, butylated hydroxyanisole and artificial flavor so effectively that his product has remained synonymous with gelatin dishes ever since.

You didn’t have to look hard for evidence of Woodward’s success in 1970s Richmond, Indiana, where I grew up. Jell-O was so popular it often appeared under two rubrics on restaurant and cafeteria menus. (Upscale cafeterias were themselves a legit way to go out for a nice dinner back then, but that’s another story.) First, it was offered as salad, not because it contained any legitimizing vegetables or fruits, mind you, but because it was colorful and could be made to sit prim as a frog on a wilted iceberg leaf. Then, you’d jump ahead two courses and find the same Jell-O offered as dessert, this time cubed and stacked in a parfait glass with whipped cream plopped on top.

At the time I was unable to admire the ingenuity represented by this semantic both/and maneuver. These days, however, one reason I don’t often serve gelled terrines is that I’m not sure where they belong in a meal. They are not rich enough (or chocolate enough) to function as dessert for most people who hanker for that course. Nor do they qualify as salad by any honest stretch of the imagination. Where a gelled fruit terrine really shines is as a palate cleanser, and the best occasion for that is a big feast — one featuring a roast ham or lamb, say, or brisket.

Which brings me back to that spring feast. My offering might have looked for all the world like it belonged at a church basement potluck. But those who tasted it had seconds. Better yet, by popular demand, I brought it again the next year — and the one after that, and the one after that, and so on — proving, to me at least, that the time has come for gelatin desserts to shake off a century of commercial ignominy, rise up and take a brave and wobbly stand.

Note: The recipe must be started at least 8 hours in advance, and can be made a day ahead. I’ve used Sauternes in place of the late-harvest Riesling (a sweet dessert wine). Essencia could also work

Supreme the citrus over a bowl, catching all the juices as you work (click here for a how-to). Place finished segments in a strainer over a bowl to drain.

Measure and strain 1 cup of the reserved juice and place in a large bowl. Sprinkle the gelatin over the surface and set aside to soften, about 5 minutes. Meanwhile, combine the wine and sugar in a saucepan and heat just until the surface shimmers (do not allow to come to a boil or even a simmer). Pour the hot wine liquid over the gelatin mixture and whisk until the gelatin is completely dissolved.

Arrange the citrus segments in a terrine mold, loaf pan or ceramic dish. Pour the gelatin mixture over the top. If desired, use a damp brush or back of a spoon to skim away any foam appearing on the surface. Cover with plastic wrap and refrigerate for at least 8 hours or overnight.

To serve, dip the bottom of the dish in a basin of hot tap water briefly — no more than 20 seconds — and invert on a serving platter if serving intact, or onto a cutting board to cut into cubes.

Substitute 2½ cups of good-quality juice (e.g., Red Jacket Raspberry-Apple) plus ¼ cup fresh squeezed lemon or lime juice for the liquid in the above recipe. Measure out 1 cup for softening the gelatin in Step 2, and heat the rest. Skip the fruit segments entirely.