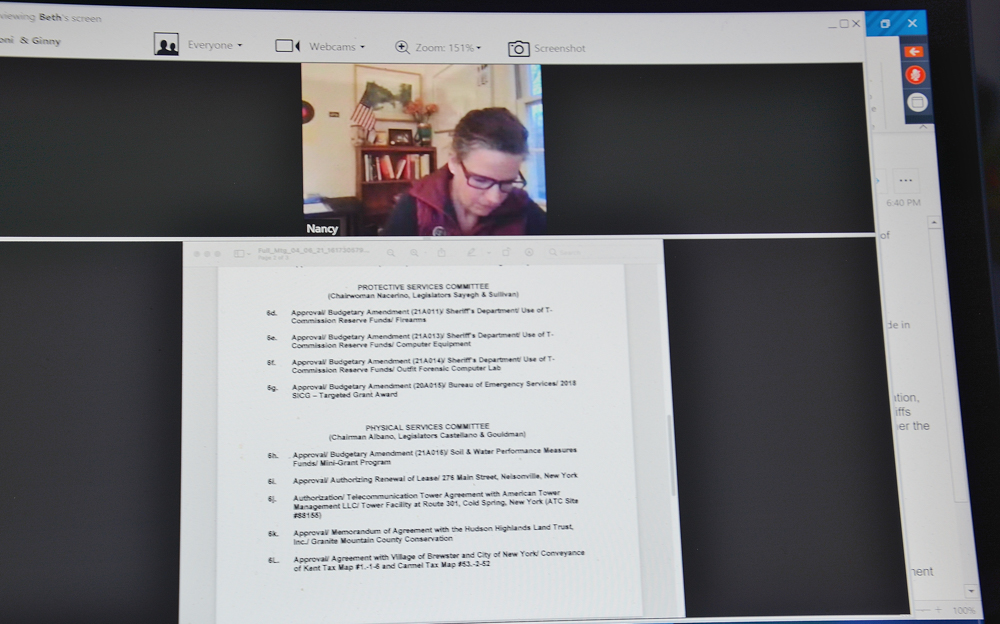 Legislator Nancy Montgomery activated a function that allowed her to be seen during a meeting on Tuesday. The other legislators remained on audio only. (Photo by L.S. Armstrong)

Putnam County legislators on Tuesday (April 6) voted 9-0 to supply the Putnam County Sheriff’s Department with new handguns and approved the terms of a new lease for Nelsonville’s former firehouse as a substation.

Meeting by (mostly) audio connection in its monthly session, the Legislature also unanimously endorsed two environmental measures: an arrangement with the Hudson Highlands Land Trust to connect a 91-acre county parcel in Putnam Valley with the trust’s 415-acre Granite Mountain Preserve; and the county Soil and Water Conservation Board’s use of $60,000 in state funds for local conservation grants.

Legislative unanimity did not extend to increased public relations spending, which was strongly opposed by Legislator Nancy Montgomery, who represents Philipstown and part of Putnam Valley.

Montgomery, the sole Democrat on the Legislature, also broke with her colleagues by activating a function that let her appear on the computer screens of those attending the meeting. “The video feature is there for all to use!” she said after the meeting. “Our constituents need to see us, and we really need to see each other.”

The gun vote allows the Sheriff’s Department to spend $95,190, income from such sources as fees for jail inmates’ phone calls, to buy 170 Glock Model 17 guns and 20 Glock Model 19s.

Under the proposal from the gun supplier, AmChar Wholesale of Rochester, the Sheriff’s Department will turn over its used handguns and receive a $250 AmChar credit per gun — or $47,500 total if all the used guns are in acceptable condition.

Legislator Ginny Nacerino, who chairs the Protective Services Committee, said that the credit “is not a monetary refund” applied to the purchase of the guns but “will be used for future expenditures,” such as for ammunition.

Sheriff’s Department Lt. Kevin McManus told Nacerino’s committee on March 18 that police handguns should be retired when they have been fired 5,000 to 10,000 times. “A lot of our guns are beyond that,” he said.

He added that the weapons use 40-caliber bullets but that the new guns will use 9mm ammunition, which the FBI considers more accurate. “We want our men and women to hit what they’re aiming for,” he said. The 9mm ammunition is also less expensive, he said.

An AmChar representative said on Tuesday that the Glocks that Putnam trades in for credit will be resold to other firearms dealers.

The Legislature also approved the use of $6,364 from the inmate-fees account to replace nine-year-old computers and $3,909 for office equipment for a computer forensics lab. It also agreed to a five-year lease with Nelsonville for the former firehouse used as a sheriff’s substation, with the rent to begin at $1,200 monthly (up from $1,000) and increase to $1,500 in the fourth and fifth years.

Despite the opposition from Montgomery, the Legislature endorsed spending up to $50,000 this year for a public relations consultant and transferred $20,000 from a contingency account for that purpose. East Branch Consulting, based in Brewster and run by Debra West, helps County Executive MaryEllen Odell write news releases and share information on the county’s COVID-19 response.

Montgomery argued that the contingency account, a reserve for emergency needs, should not underwrite public-relations efforts. She acknowledged that “it’s critical we get this important information out to the public” but said that role could be better handled, in conjunction with health officials, by “someone who has some expertise in a pandemic … and is trained in public health. Money should be going directly to the Health Department.”