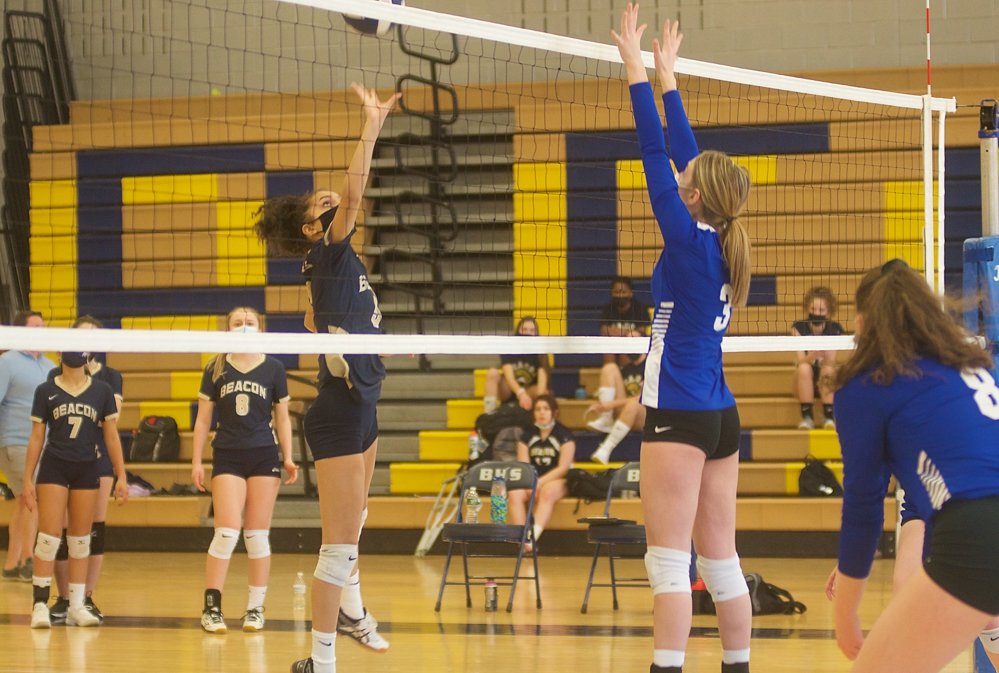 Kate Jordan (3) and the Haldane volleyball team topped Beacon on Friday to sweep the season series. (Photos by S. Pearlman)

With wins over Pawling and Beacon this week, the Haldane High School volleyball team improved its season record to 9-1, with the playoffs looming.

“That was by far Maria’s best game so far,” Coach Kristina Roling said. “She was amazing with her serving; she’s been working hard and it shows. Jill [Weinpahl] also had a good game [16 digs, six aces]; she was our top serve receiver.

“We played well as a team,” Roling added. “We’ve been working on getting the kinks out.”

The previous Friday at Beacon, Haldane again rolled in straight games, as the Bulldogs (0-9) continue to search for a win.

Barry had 10 kills, 13 digs and three aces for Haldane; Weinpahl added five kills and six aces; and Tomann had 19 assists and 15 digs.

Beacon Coach Ron Pagliaro said his team is becoming more competitive, but “unfortunately, we keep coming up short. In our last three matches we lost to Ketcham twice and Haldane, scoring 20 points or more in seven of nine sets.”

Lejdina Gecji has averaged nine kills and two blocks for Beacon and Beyonce Otero 11 assists and three aces. “Lejdina has not only improved her performance; she also has developed into a strong team leader,” Pagliaro said.

Haldane will host Putnam Valley on Saturday (April 10) and visit Poughkeepsie and Putnam Valley early next week. Its season finale is Friday at home against Carmel. Beacon will visit Lourdes today (April 9) and Carmel on Tuesday.

Darrin Santos’ 57-yard breakaway touchdown run with 1:30 remaining in the game iced a 16-2 victory over Woodlands for Haldane on Saturday (April 3) at home. 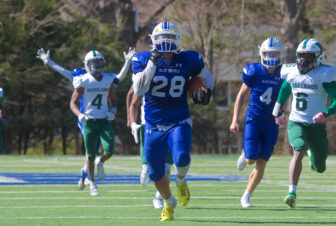 Santos also scored on a 20-yard run in the first quarter and finished with 115 yards on 18 carries to propel Haldane (1-2) to its first victory.

“It was great to get that first win,” said Coach Ryan McConville. “When we forced the turnover [that led to the second TD], I told them: This can get us the win.”

Of Santos, McConville said: “Darrin is always around the ball, he’s been doing everything he can to help the team succeed.” The coach also cited the play on defense of Doug Donaghy, Evan Giachinta, Dylan Rucker and Giancarlo Carone.

At quarterback, Dan Santos completed 6-of-12 attempts for 66 yards for the Blue Devils but was picked off three times as both offenses sputtered; Woodlands lost three fumbles. Ryan Irwin ran for both two-point conversions and had two receptions for 37 yards.

Both teams made plenty of mistakes, but it was Haldane that made the most of its opportunities. Woodlands’ only points came on a safety.

“Our defense carried us,” McConville said. “We had some turnovers but we kept Woodlands out of the end zone.”

McConville said the win was an emotional boost for the team, especially the seniors — the Santos twins, Josh Reyes, Donaghy, Kevin Van Tassel, Andrew Aiston, Christian Pezzullo, Alex Ferdico and Victor Mollino — who were honored before the game.

McConville said his team will have to play better to compete with the defending Section 1, Class C champion. “We’ve got to get into a rhythm and throw the ball more consistently,” he said. “Our offensive line will need to make consistent adjustments. They have a good running attack.”

Beacon’s game at Mahopac on April 1 was canceled after the team had to quarantine because of a COVID-19 exposure; the Bulldogs (0-2) are scheduled to host Somers today (April 9) at 7 p.m.

Beacon’s girls’ swim team picked up a 98-69 win over Ketcham on Wednesday (April 7) in a meet held at Beacon High School. The Bulldogs also topped Mount Vernon, 93-25, the day before to improve to 5-1.

Beacon is scheduled to swim against Port Chester on Tuesday (April 13).