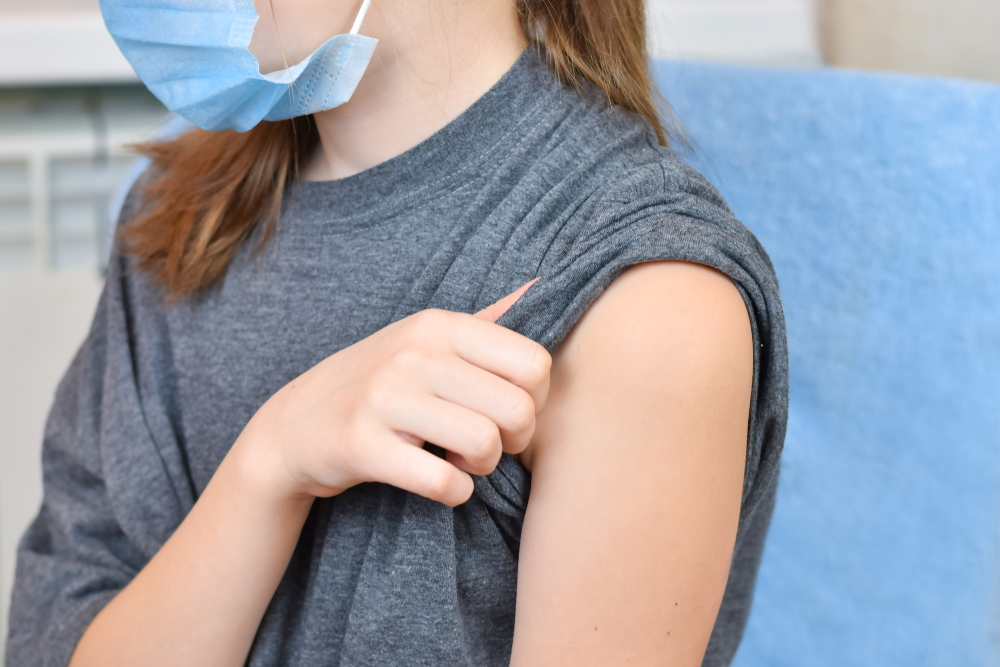 New York has approved vaccinations for 16- and 17-year-olds but not younger.

At an outdoor tent behind the practice, from the window of their parents’ cars, the young patients are given a COVID-19 test. The results are ready in about 15 minutes, said Dr. Peter Gergely, who said his office is seeing a “definite uptick” in positive cases.

“Initially we were seeing one case per family — usually one person would test positive and everybody else would be negative,” he said. “Now we’re seeing siblings all being positive together.”

Something else is consistent.

Gergely estimates that when parents speak to him about the COVID-19 vaccines, 75 percent want to know one thing: when will his practice, which has been certified by the state to administer the shots, receive doses approved for children and teens younger than 16?

At least for middle and high school students, it appears likely they will be available before the start of the 2021-22 school year in September. 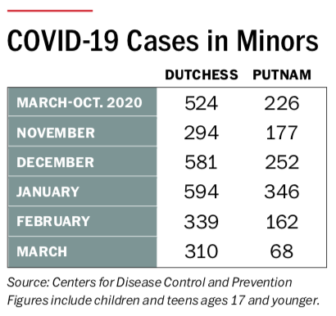 On March 31, Pfizer-BioNTech announced that a study of nearly 2,300 children between 12 and 15 years old showed its vaccine to be 100 percent effective. (The vaccine has been approved for anyone 16 and older.) The company said it planned to seek federal approval for its vaccine to be administered to children and teens as young as 12.

While Pfizer moves forward, Moderna has enrolled 3,000 children between 12 and 17 years old in a study of its vaccine, which is limited now to adults, and Johnson & Johnson said last week it is starting its own trial for that age group. Pfizer and Moderna also have started testing their vaccines on children between six months and 11 years old.

Although minors ages 12 to 15 will likely soon be able to get appointments, those age 11 and younger may have to wait until 2022. Pfizer said it expects results from its study on children younger than 12 to be ready in the second half of this year. If it is successful, the company said it will seek federal approval early next year.

Gergely said some parents told him they had immediately booked appointments for their 16- and 17-year-old children when they became eligible in New York on Tuesday (April 6) to receive the Pfizer vaccine.

“I’m always in support of them [young people] getting it as soon as it’s approved, and that’s how most parents are feeling, too,” said Gergely.

The stakes are high. Inoculating children and adolescents is seen as a key to having schools resemble something close to their pre-pandemic norm when they start a new academic year in the fall.

Because people who are fully vaccinated are not required to quarantine if exposed to someone testing positive for COVID-19, inoculating students when they become eligible would be “significant step toward ensuring that our schools can operate much like they were before the pandemic,” said Haldane Superintendent Philip Benante.

Multiple times since the school year started, Haldane has had to cancel classes or have students quarantine because of a positive case. Without vaccinations, “there is still the potential for a significant number of quarantines if an infected individual enters the school,” said Benante.

Vaccinating kids also will be crucial in reaching herd immunity, when roughly 75 percent of U.S. residents are inoculated and the virus that causes COVID-19 essentially runs out of people to infect. Minors represent 22 percent of the U.S. population and 19 percent of residents in Dutchess and Putnam.

A recent rise in infections among young people, and a more-contagious variant of the virus that is now dominant in the U.S., also fuels the sense of urgency.

On Monday (April 5), Rochelle Walensky, the director of the federal Centers for Disease Control and Prevention (CDC), warned about a rise in cases among children and young adults, noting that “many outbreaks in young people are related to youth sports and extracurricular activities.”

As of April 1, nearly 3.5 million children in the U.S. had been infected, according to a weekly report by the American Academy of Pediatrics and the Children’s Hospital Association. During the week ending April 1, nearly 64,000 new cases were reported, far below a pandemic high of 211,466 for the week ending Jan. 14 but 22 percent higher than three weeks earlier.

Confirmed and probable COVID-19 cases among minors began skyrocketing in Dutchess and Putnam counties in November as holiday traveling and gatherings increased, according to data reported by the CDC through March. (New York State publicizes age-group data for COVID-19 fatalities, but not for cases.)

There were 554 confirmed infections in Dutchess among minors between March and October but there have been more than 2,000 since, according to the CDC. In Putnam, just over 1,000 youths have tested positive for COVID-19 since the beginning of November, compared to 226 from March to October.

As of Tuesday, 89 students had tested positive in the Beacon school district since the beginning of the school year, 32 at Haldane and nine at Garrison. The state reported another six cases since September at the private Manitou School in Philipstown.