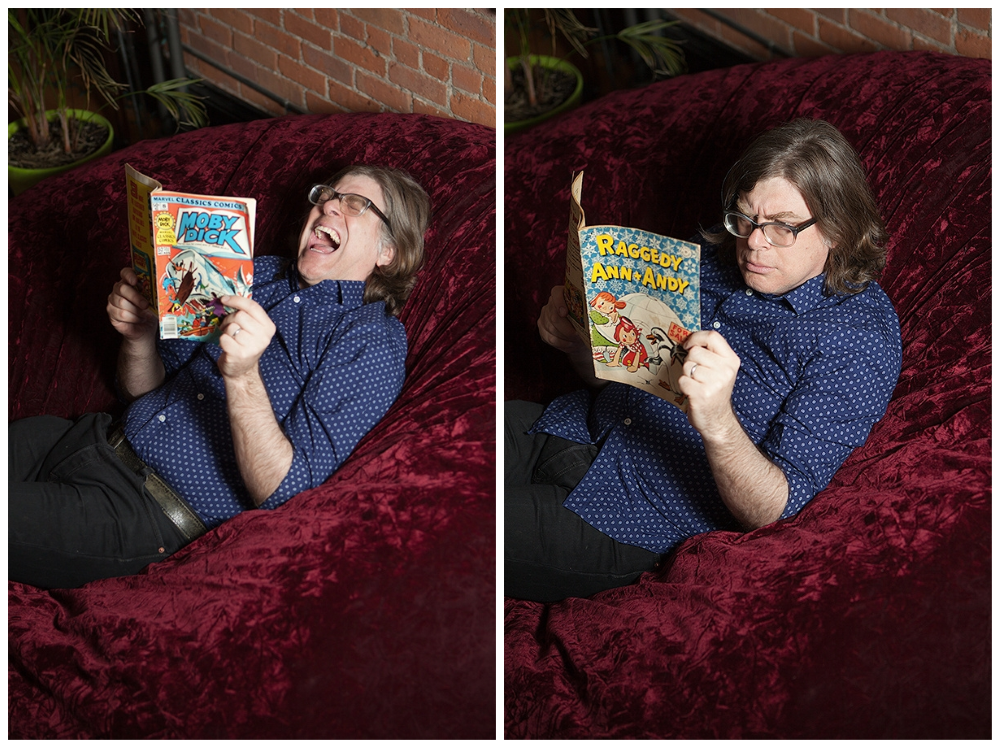 Nelsonville editor has a career an 8-year-old would love

Chris Duffy’s resume will inspire job lust in many creative adults — and children.

He has written comic books for Marvel and DC, edited comics for Nickelodeon Magazine and United Plankton Pictures (aka Sponge Bob) and edited the bestselling collection Fairy Tale Comics.

He concedes that the 8-year-old Chris Duffy would have been envious of his future self.

“I always hoped I could do this as a job,” Duffy says. “I was just the right age when the origins of Marvel comics came out.” Marvel creator Stan Lee, who died in 2018 at age 95, “was the guy who told the world there’s a job making comics: editing them, writing them. I was probably in second or third grade and I loved comics. A lot of people my age, probably older, would say the same thing.”

After growing up in Winchester, Massachusetts, and earning degrees in history and literature from Harvard, his goal was “to move to New York, get paid and work in comics. Being able to say I was a history major got me in the door.”

Duffy’s first publishing job was copy editing nonfiction books. “It was sort of a factory, trying for a land grab for a particular kind of book, which was about 100 pages on a history or arts topic,” he recalls. “There was a huge demand for biographies for middle school students of women, people of color and other nontraditional parts of American history. Our job was to proofread and check every fact. This was pre-digital, so it meant using Rolodexes” and calling libraries.

He followed his boss to Disney Press. While still editing book copy, Duffy chased jobs for three years at Marvel and DC. He was hired in 1993 by DC as an assistant editor and stayed for three years, “running around the building getting different pieces proofread and corrections done.” Next, he submitted “a tryout piece, which I wrote on my honeymoon” (his wife, Peggy Clements, is a child development and education researcher and a member of the Haldane school board), to Nickelodeon Magazine and was hired there.

“They were targeting the same age range, ages 8 to 12, and were undergoing a shift from making comics for comic book fans to finding a more genuine connection between the product and the reader,” he says. “They did original comics, not necessarily based on their shows. I have no idea why they hired me, but I stayed 13 years, so it must have worked out.” When the economy tanked in 2009 and the magazine folded, he moved to Sponge Bob Comics.

At Workman, Duffy says he recently edited “two really great books”: So Embarrassing, “which is what it sounds like,” and Twisted Tongues, a collection of “tongue twisters that are gross.”

His most recent effort as an author is The Wild Mustang: Horses of the American West, although he admits to never having ridden a horse. Illustrated by Falynn Koch, it’s part of a series for middle school readers called History Comics.

“All I knew when I started is that horses came with the Spanish, on the second voyage of Columbus,” he says. “I had to leave some parts out, as not all of the issues it raises are super-relevant to horses. For instance, I didn’t go into how disease wiped out Native Americans, because, in the newer ways of looking at that, deprivation carries as much weight as disease. The more I wrote, the more the topic felt relevant to many things.”

As is now standard in publishing, Duffy says, “two sensitivity readers went through it, considering everything from the presentation of points of view and, for example, making sure we were using the most up-to-date terminology on how tribes prefer to be called.” 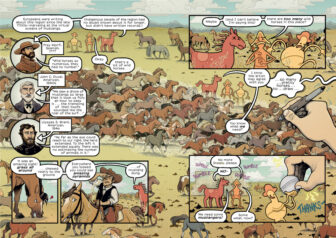 A spread from Wild Mustangs, with art by Falynn Koch and text by Chris Duffy

His most recent work as a freelancer was editing Nursery Rhyme Comics, for which he recruited 50 cartoonists.

When editing comics, he says, “if it were telling someone how to draw better, I wouldn’t do it. It’s more about telling the story clearly and effectively. It helps to have read a lot of comics. Being an editor means hiring somebody who has already figured out how to do it. You help shape it, make it clearer, remembering that an editor is just a critical reader.”

With digital everything, is there a future for comics on paper? “Some people thought it would all be gone by now,” Duffy says. “But people read differently on screen than in a book, and younger people do value books. I think there will be more choice.”