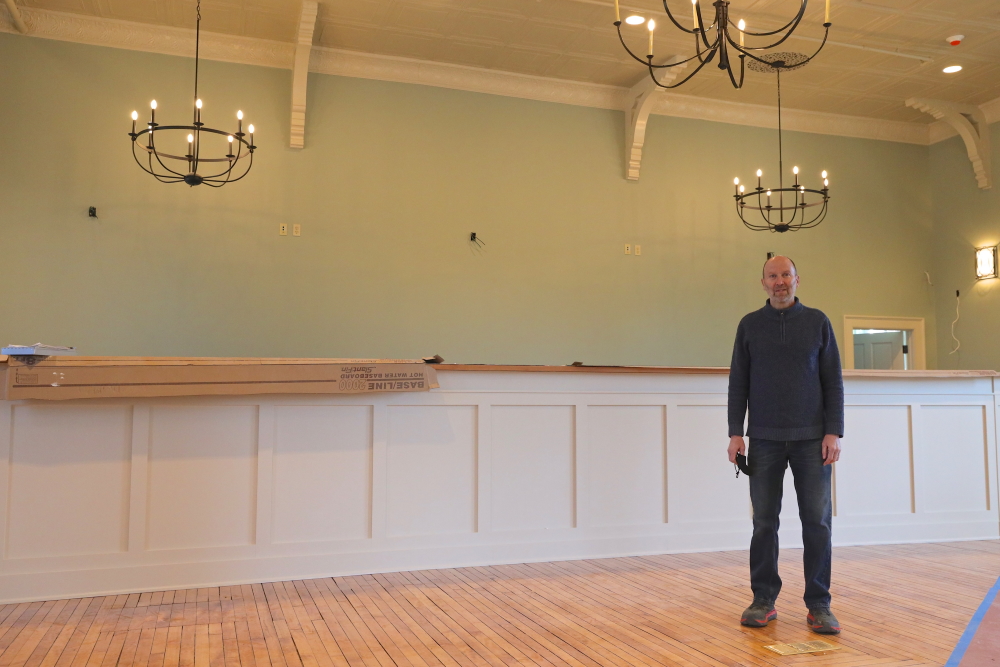 Philipstown Supervisor Richard Shea inside the renovated Town Hall earlier this month. The town returned to the building this week after 16 months in temporary locations. (Photo by Ross Corsair)

A major restoration of the 1867 Philipstown Town Hall was completed this week and the clerk, supervisor, assessor and Justice Court moved back in from temporary quarters at the Old VFW Hall and the American Legion.

The renovations began 16 months ago on the building, at 238 Main St. in Cold Spring. The rehab work, which was slowed by the pandemic shutdown, cost about $1.8 million, Supervisor Richard Shea said on Wednesday (April 14).

“We saved for about 16 years to get in a position where we could do this with no impact for the tax assessment,” he said earlier in the month while providing a tour. “In the end, we’ll have a building that is a real legacy. The building was in danger of falling down because of water damage and decay. It just hadn’t been attended to since the 1870s. There had been Band-Aids put on things but the building didn’t function in a way that lent itself toward modern government.”

In September 2019, the Town Board approved up to $2 million in bond financing for the renovations. At the time, Shea, who is a contractor, said the bonding total exceeded what the town expected to spend because “we know that when they start tearing into this building, they’re probably going to find some surprises — not the good kind.”

While the town clerk and assessor have moved back into Town Hall, their offices remain open only by appointment because of the pandemic shutdown. Call 845-265-3329 or email [email protected] The Justice Court also has not resumed regular sessions but messages can be left at 845-265-2951.

It’s not clear when the Town Board will return to its meeting room. Its next meeting is scheduled for May 6; Supervisor Richard Shea said he planned to consult with the other board members to see how comfortable they are with meeting in-person. All have been vaccinated.

“It would be nice to get back together,” Shea said. “I’m not at all sure about public attendance at this point but we will adhere to the CDC [Centers for Disease Control and Prevention] and state guidelines. The meetings will still be televised and we could host people on Zoom for questions.”

Shea said on Wednesday that there had been the expected surprises and additional costs, and that “without the work of the Town Board and the many hours that Justin Kacur of Highlands Architecture donated, we could never have come in under budget.” As examples, he noted that a boiler was installed that was not in the original plan and stainless steel added to the chimney after the discovery that it was unlined brick.

In addition, “the fire suppression system grew in scope,” he said. “We also decided to raise the ceiling in the meeting room to the tin panels and restore them; the original plan had been to be more ‘corporate’ and go with a dropped panel ceiling.”

While giving a tour, Shea noted that “everything in the building, interior and exterior, has been redone and modernized, and also with an eye toward energy efficiency,” including new windows, lighting and heating and cooling systems, an elevator and bathrooms that comply with the Americans with Disabilities Act.

“One of the problems was, in the winter, you couldn’t get the building to temperature, so people were wandering around with coats on,” he said.

At a Town Board meeting on April 8, he said that, with the upgrades, “by and large it will be a very green building, and a much greener building than it used to be. It was green only based on the fact it was covered in mold.”

The work restored many of the building’s original features, including the maple floor in the meeting room, which had been covered by carpet. “My mother tells me there were roller-skating events up here,” he said. “If you look at the historical records, all sorts of community events were held up here, such as concerts and speaking events. So we’re glad that we’re able to bring this floor back and really lighten up the room.”

The Philipstown Town Hall was built in 1867 following three acts of the State Legislature. The first, in 1864, authorized the Philipstown Board of Trustees and the police commissioner to “procure a suitable piece of ground” for a jail. The second, an amendment to the 1864 act, authorized the town to issue bonds of up to $10,000 to build a Town Hall with a jail. The third, which amended the second, authorized the town to issue up to $13,500 in bonds, repayable at up to 7 percent interest over 10 years. The final bill was $7,000.

A quarter-century later, according to an 1894 account in The Cold Spring Recorder, a group of townspeople presented the Town Board at its Feb. 6 meeting with a petition and proposal to transform the meeting room into a performance space. Based on their interpretation of the state legislation, voters would have to approve the spending, and the election was a week away. Would the board add their plan to the ballot? 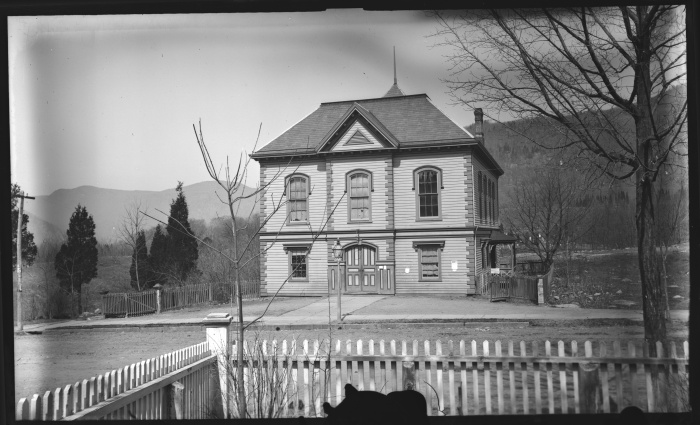 The proposal called for the building to be extended by 25 feet to allow for a stage with a dressing room and staircase to the ground floor on each side and room for an orchestra. In addition, the floor would be sloped from the rear and opera chairs installed. A temporary floor could be installed over the chairs to hold meetings or for elections or “entertainments.” The ceiling would be removed to open the space to the roof and to add ventilation; fire escapes would be installed in the second-floor windows; and painting would be done inside and out.

During the meeting, several people said they took exception to the plans for sloping floors, temporary flooring or removing the ceiling. One petitioner insisted on the installation of steam heating and gas lighting. Another, “from the country,” advocated buying the adjacent land to build horse sheds. “Then it was said that a cabinet piano should go on the new stage, and that the two staircases should descend [outside] to the street,” The Recorder reported.

“Thus the Town Board realized the gravity of the situation, which they discussed most seriously for several hours on the 8th of February,” the newspaper reported. “There was some uncertainty about the law; there was additional uncertainty about the exact limit of alteration and expense to which to go; there was a feeling that drawings should be prepared to be exhibited to the people, allowing exactly what was to be done; there was lack of time to secure specific estimates, as well as to exploit the perfected design so that the electorate of Philipstown might thoroughly grasp the situation; and rise to the responsibility of the occasion.

“So it came to pass, as the shades of night were gathering around the council chamber, it was, ‘Resolved, that in the opinion of this board the time to intelligently present said petition to the people of said town is too limited; and we therefore under the circumstances respectfully decline to submit said petition at the coming election.’ ”

A week after the election, a resident wrote to The Recorder: “If the people wish their town-house improved, who shall say them nay? Let the people’s voice be heard.”

Another resident responded: “Why is it that we hear so much senseless chatter about internal improvements? For 25 years, this Town Hall has been good enough for better men — I say this candidly — than we have today. The entrances are wide enough for straightforward people. The ceiling is high enough for humility. The stage is low enough for high-minded people. And the benches are soft enough if people have an easy conscience.”

The windows, he said, are “historic reproductions of what was here, but they just function in a much more energy-efficient way. We can open them and ventilate the room, where in the past they were covered with plastic just trying to keep some heat in.”

He pointed out that the restoration included installing lights in the vents that were used when the room was lit by gas lamps. “They would get so hot that they had the vent out to the outside, so there were four chimneys in the room that went outside.

“There were a lot of period details in the building that we were able to keep,” he said. “I think preserving this Town Hall in this location, in this building, was really important. We considered moving out, going to a different site, maybe even constructing a building, but historic buildings need to be preserved. And this is part of our history.

“There’s a long history here in Philipstown, so I think it was really important to stay in this building, to respect the building, and to bring it back to life. And now it will be a much more pleasant work environment, a much more energy-efficient building and something I’m going to be proud to hand off to the next person who sits in my seat. I’d say, congratulations to the Town of Philipstown.”

One thought on “Town Hall Gets a Makeover”