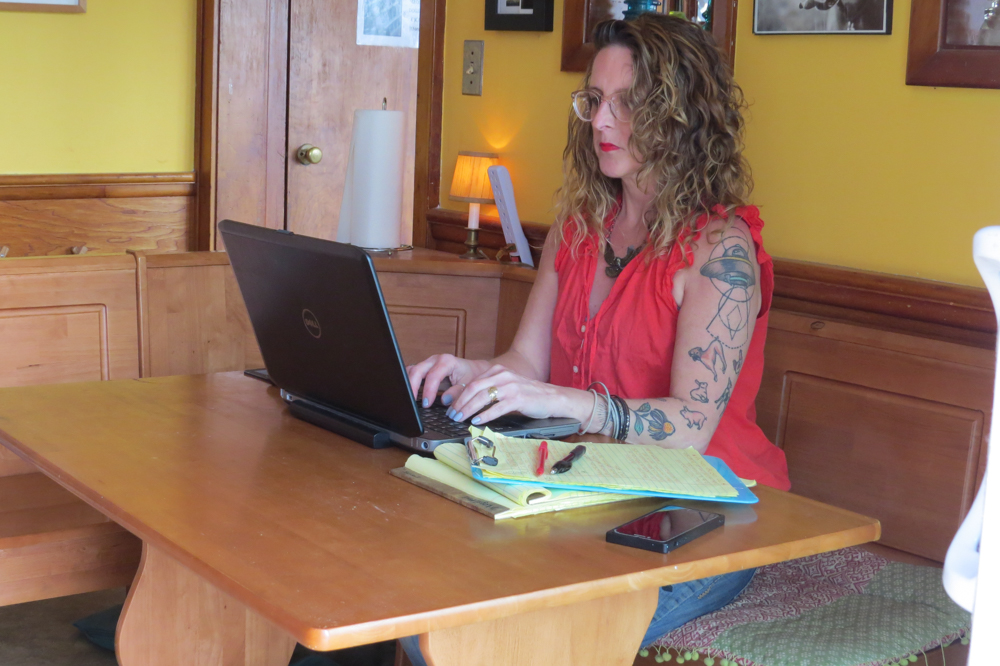 Heidi Harrison of Beacon is a member of the volunteer Vaccine Appointment Assistance Team. (Photo by L. Sparks)

Heidi Harrison received a call recently at 8 a.m. from a Beacon resident looking for a unicorn: a same-day vaccine appointment.

He said his mother was gravely ill in California and he was leaving the next day to see her. He had gotten his first shot but not his booster. Harrison, who also lives in Beacon, began working the phones, reaching out to pharmacies and county officials.

At 5 p.m., the Dutchess County health department called with good news. It had space at a second-dose clinic inside the former JCPenney space at Poughkeepsie Galleria.

“It was such a sad situation for him because he’s worried about his mom but needed that second dose,” said Harrison.

That type of vaccine-related stress is what inspired the creation of the grassroots Vaccine Appointment Assistance Team, volunteers who use their internet skills and can-do personalities to help people find appointments. Initially the efforts were informal, for family members and friends, but the group’s members found each other on Facebook.

Anna Shah, an attorney in the Town of Poughkeepsie who co-founded the team, said it is partnering with Dutchess County’s Medical Reserve Corps and Vaccine Equity Task Force to pursue a singular goal: get enough people vaccinated to achieve herd immunity, when the virus that causes COVID-19 essentially runs out of people to infect. Many scientists believe that could occur when 75 percent to 85 percent of the U.S. population has been vaccinated.

Shah says team members have booked thousands of appointments for seniors, working people, college students, disabled residents, immigrants and others who might find it difficult to navigate the system.

Although a lot of media attention has been given to people reluctant to get vaccinated, a significant number of people who want to be inoculated are encountering obstacles.

While technology and transportation remain particular barriers for seniors — Harrison said her 85-year-old father still uses a flip phone — working families may struggle to set aside time to drive to clinics; 16- and 17-year-olds can only receive the Pfizer vaccine; and immigrants may not be fluent in English or have fears about the U.S. medical system. “A lot of people give up,” she said.

Harrison puts on music before manning her laptop and tackling a spreadsheet of requests each morning. She is full of stories.

On April 8, she received a call from a Brooklyn woman referred by a doctor for whom Harrison had found an appointment. The woman wanted the one-shot Johnson & Johnson vaccine. Harrison called 10 pharmacies in the woman’s ZIP code before finding an appointment 2 miles away and available within two hours.

“Every platform is different; every pharmacy has a different registration process. So you just have to stalk each page and check ZIP codes,” she said.

There are others, like the 87-year-old woman who was legally blind and also wanted the Johnson & Johnson vaccine, or the family who called on behalf of their son, who was seeking a shot in Pennsylvania, where he attended college.

Athena Torri Cervantes and her partner, Toni Maeck, who live in Beacon, are also on the Vaccine Appointment Assistance Team. Cervantes, who is Ecuadorian, volunteered last year as a translator for the U.S. Census and Mutual Aid Beacon.

“Any kind of medical thing in the U.S. is very hard when you don’t speak English or aren’t completely fluent,” she said.

The scarcity of vaccines that characterized the initial months of the rollout in December, January and February is melting away with increases in production and the number of places offering shots.

Not only are appointments more plentiful, but they are available closer to home and during hours when people are not typically working, said Maeck. “It used to be that you’d have to drop everything and drive a long way,” she said.