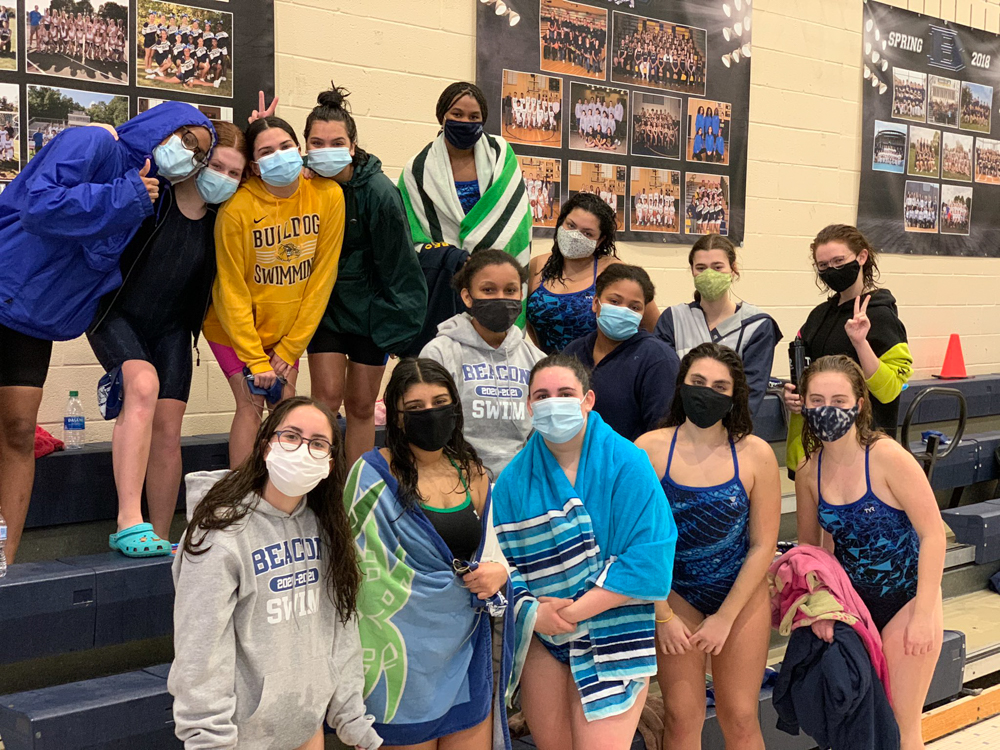 “It was the smallest girls’ team I’ve had, but they clicked together like a well-oiled machine,” said Coach Larry Collins. “This wasn’t the fastest team but the best in terms of how they got along and practiced. They all had personal bests,” despite having to deal with pandemic safety protocols.

Collins liked what he saw from his young swimmers. “Haydt crushed every swim. Kumar also was fantastic.” Both, he said, “can lead the way for us next year. Stampleman has a fantastic future. They give us a good foundation.”

The Bulldogs did not have any swimmers qualify for this week’s Section I championships, but Collins believes the district’s move in the fall to Section IX will be good for his squad.

“It’s sad we didn’t get a chance to swim in the championships,” he said. “But in Section IX, I think we’ll have a chance to be even more competitive.”

The top-seeded Haldane High School volleyball team earned a bye in the first round of this week’s Section I regional playoff but couldn’t get past No. 4 Croton, falling on Tuesday (April 20) in straight sets, 25-22, 25-23, 26-24.

“We didn’t close it,” said Coach Kristina Roling. “Their defense was more fine-tuned. We sent a lot of free balls over, and they converted those into attacks, while we were playing defense the whole game. They got us out of system a lot more than usual.”

The Blue Devils closed a solid season at 13-2, with both losses coming to Croton.

“We had a good feeling going in,” Roling said. “It’s hard, especially for the seniors. But we had a solid season, the girls should be super proud. A lot of them had new positions, some were new to varsity. We’ll have a lot of returning players next year, so I’m hopeful we can be competitive again.”

“Megan Farrell did a great job at libero,” Roling said. “Because of their huge blockers, she got a lot more second touches and did a wonderful job controlling the ball and serve-receiving.

“Maria had her best serve-receive performance,” Roling added. “Meghan ran everywhere to get second touches and had a lot more than usual. And Jill did a good job on defense. Kate Jordan and Zoe Silverman had big blocks and got the team up. All of the girls pulled together and did a great job.”

Beacon, which finished 0-13 on the season, did not make the Dutchess County playoffs, which included only the top five teams.

After a two-week layoff due to COVID-19 protocols, the Beacon High football team returned to its home field on Saturday (April 17) only to face one of the section’s top teams, Our Lady of Lourdes.

The Warriors prevailed with a 42-0 victory, pushing the Bulldogs to 0-3. Beacon was scheduled to host Greeley on Thursday (April 22) in its final game of the season. Greeley was also winless at 0-4. 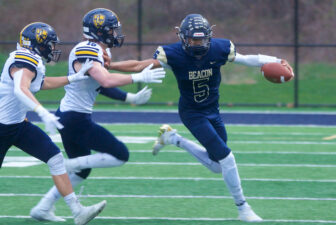 Beacon quarterback Jason Komisar (5) was on the run from a tough Lourdes defense for most of Saturday’s game. (Photo by S. Pearlman)

Beacon struggled to get anything going against a talented Lourdes team. Led by standout quarterback Brandon Jorgensen, Lourdes dominated whenever it had the ball.

“We competed a lot better than the score showed,” said Coach Jim Phelan. “We had a couple of opportunities we didn’t cash in on. We were at the goal line twice and got stopped.”

“Jason played well,” Phelan said. “A few times we let him down by dropping balls. Isaac and Mark also played well. Tyler Haydt played a great game at center and defensive end, and our defense was led by Jamaal Jackson Jr., who led us in tackles. Leibinson Perez Novas and Keiran Kacur also had a great game on defense.

“We also have a lot of freshman linemen who have been stepping up and working hard and pushing a lot of the seniors,” he said. “Mike Varian, Jayden Quintana and Joe Battle all played well.”

Haldane picked up its second win of the season on Saturday at Rye Neck, buoyed by a 24-point second quarter on the way to a 36-12 victory.

Quarterback Dan Santos had 137 yards and one touchdown passing, and 172 yards and two TDs on the ground.

Christian Pezzullo opened the scoring in the second quarter with a 16-yard fumble return. Santos followed with a 28-yard run for a 16-0 lead, and ran for another 3-yard touchdown later in the quarter to make it 24-6.

Ryan Irwin scored on a 51-yard pass from Santos in the fourth, and Pezzullo closed the scoring with a 40-yard fumble return. Irwin finished with 60 yards on two catches and Doug Donaghy had three receptions for 60 yards.