Where there are independent bookstores, there are usually book clubs, and Cold Spring’s Split Rock Books is no exception.

Within months of its opening in June 2018, it had created five clubs, each of which has survived the pandemic by meeting via Zoom. 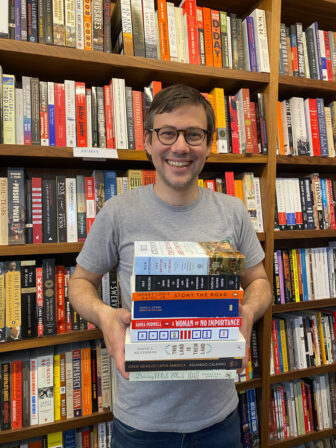 The fiction club is overseen by Split Rock’s owners, Heidi and Michael Bender; Emily Dykeman leads Reading with Writers, which focuses on titles about the writing process; Heidi organizes a club for middle school students; Summer Pierre heads up a graphic novels club; and Michael leads a history book club.

When it began, the history group met once a month but now meets every other because its selections tend to be longer. “That makes it a little bit less of a race against time,” Michael explains. Its next meeting is scheduled for May 20. The selection is the first volume of The Years of Lyndon Johnson, by Robert Caro.

Michael Bender, who majored in history in college, says he has always loved the genre, “although sometimes there’s an amazing topic, with great research, but dry writing.” He tries to avoid that combination when making picks, and to pick from various eras and perspectives, although the books are mostly American history. The topics, he says, are not typically those covered in school.

“For me, the purpose is to understand the world we live in,” he says. “I think the people in the club feel that way also. A lot of it also results from curiosity.”

His first pick for the club in 2018 was The Warmth of Other Suns, by Isabel Wilkerson, which is about the movement of some 6 million Black people from rural areas of the South to the North between 1916 and 1970.

Other selections have included Revolution on the Hudson, by George C. Daughan; Infamy: The Shocking Story of the Japanese-American Internment in World War II, by Richard Reeves; Fantasyland: How America Went Haywire: A 500-Year History, by Kurt Andersen; Reveille in Washington: 1860-1865, by Margaret Leech; The British Are Coming, by Rick Atkinson; A Woman of No Importance: The Untold Story of the American Spy Who Helped Win World War II, by Sonia Purnell; This Land is Their Land: The Wampanoag Indians, Plymouth Colony and the Troubled History of Thanksgiving, by David Silverman; and Open Veins of Latin America: Five Centuries of the Pillage of a Continent, by Eduardo Galeano.

Because he had never participated in a book club, let alone run one, Bender joined the fiction club at the Butterfield Library in 2018 while he and his wife prepared to open Split Rock.

We asked Michael Bender to recommend three favorite history books he has not yet selected for the club.

■ Blood in the Water: The Attica Prison Uprising of 1971 and its Legacy, by Heather Ann Thompson

■ From #Blacklivesmatter to Black Liberation, by Keeanga-Yamahtta Taylor

While the history book club is “a little looser than some,” he found that his initial idea to let members select the books didn’t last long. “People didn’t seem to mind me choosing them,” he says, and it made it easier for Split Rock to have enough copies in stock. (The only requirement for membership in any of the clubs is to purchase the selections from Split Rock.)

Anita Prentice, who lives in Garrison, is an enthusiastic regular in the history club.

“The experience of reading a book is always enhanced by the experience of being able to discuss it with other knowledgeable readers,” she says. “I’ve found those in the club. The choice of books is also rewarding because they are often titles I wouldn’t just pick up on my own, and they are always worth the effort. And I’ve met some nice, thoughtful history-loving readers I would not have encountered otherwise.”

Bender says he starts each meeting with a simple question: Did you enjoy the book? That’s followed by discussion of the author’s style, the subject and what stood out. “Topics connect with each other from previous readings, in the way history just does,” he says. For instance, he said, the group found parallels between Give Us the Ballot, by Ari Berman, which focuses on voting rights, and Driving While Black, by Gretchen Sorin, which details how car ownership affected civil rights.

“The closest thing to debate is that sometimes the older people in the group may not particularly like the tone of a book — not necessarily the viewpoint, but the tone.” For instance, with An Indigenous Peoples’ History of the United States, by Roxanne Dunbar Ortiz, “one person felt there were Socialist/Marxist viewpoints that he didn’t agree with, while another person had a different take on it. I enjoyed their talk about this — there was nothing uncivil about it, and it didn’t feel left versus right.”

For Jennifer Howse, another member, who lives in Cold Spring, the discussions can be eye-opening. “I joined to counterbalance the 24/7 firehose of news, or ‘history in the making,’ with measured accounts of past events,” she explains. “Our lively, insightful conversations help me understand what drives change and conflict in the world.”

For more information on any of Split Rock’s clubs, visit splitrockbks.com.