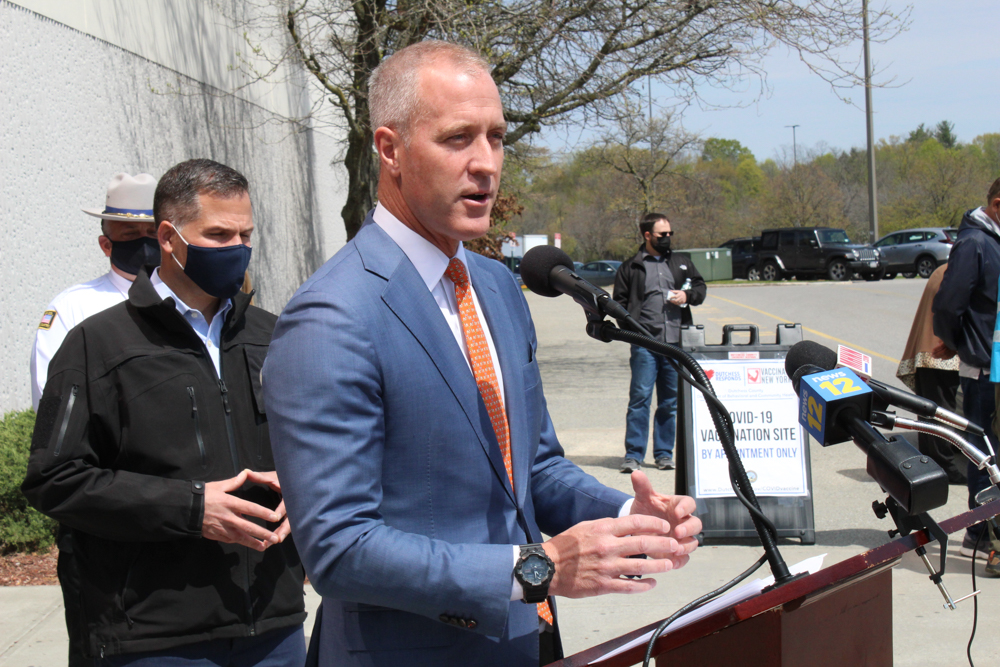 They came in cars, Dutchess County Transit buses and vans.

At the former J.C. Penney space at the Poughkeepsie Galleria, one of two sites where the county regularly administers COVID-19 vaccines, a procession of adults — working people, some still in uniform; retired couples; seniors in wheelchairs pushed by caregivers — streamed through the doors on Tuesday (April 27).

None of them needed to hear the message Rep. Sean Patrick Maloney and Dutchess County Executive Marc Molinaro delivered from a podium stationed to the right of the entrance. The two elected officials praised the progress in vaccinating people and the recent drop in infections. Then they got to the point — this one aimed at people slow to get vaccinated or outright opposed.

While New York State and Dutchess are near joining Putnam County in the milestone of administering at least one vaccine dose to half their populations, public officials are confronting a concerning reality: the waning demand for shots while the country is still well short of the 75 to 85 percent vaccination rate considered necessary for herd immunity, when the virus essentially runs out of people to infect.

The administration of first doses, a good measure of how many people are getting vaccinated, is down sharply in the state, from an average of nearly 115,000 during the first week of April to about 71,900 for the seven-day period that ended Wednesday (April 28).

The trend is also downward in the seven-county Mid-Hudson Region, which includes Dutchess and Putnam. The region’s counties administered an average of about 8,800 first doses a day for the seven-day period ending Wednesday, far below the average of nearly 14,000 a day during the first week of April.

At a recent vaccination clinic organized by Putnam County for people receiving their first dose, just 46 of 500 appointments were filled, said Maloney.

Dutchess and Putnam, along with the state, are now allowing walk-in appointments at their sites, including Poughkeepsie Galleria and the Philipstown Recreation Center in Garrison.

They also are waging a vigorous public relations campaign, posting memes on social media sites about the vaccines’ safety and effectiveness. Dutchess has recruited clergy and nonprofit leaders to reach the unvaccinated and is holding pop-up clinics in rural areas and communities that are not close to county- or state-run sites.

Convincing people will require “conversation after conversation — at Dunkin’ Donuts, at the church, at the soccer field,” said Molinaro, whose father died last year of COVID-19. “We continue to vaccinate and we continue to educate, and when we’re done, light will overcome the darkness and we will get back to living again.”

Polling tells part of the story.

One in four adults said they will not get vaccinated, according to the results of a national poll released on Tuesday by the Marist College Institute for Public Opinion for PBS NewsHour and National Public Radio. The opposition is strongest among Republicans, especially men; white men who are not college graduates; people 40 to 55 years old; and Latinos. The findings are consistent with previous surveys by Marist and other pollsters. 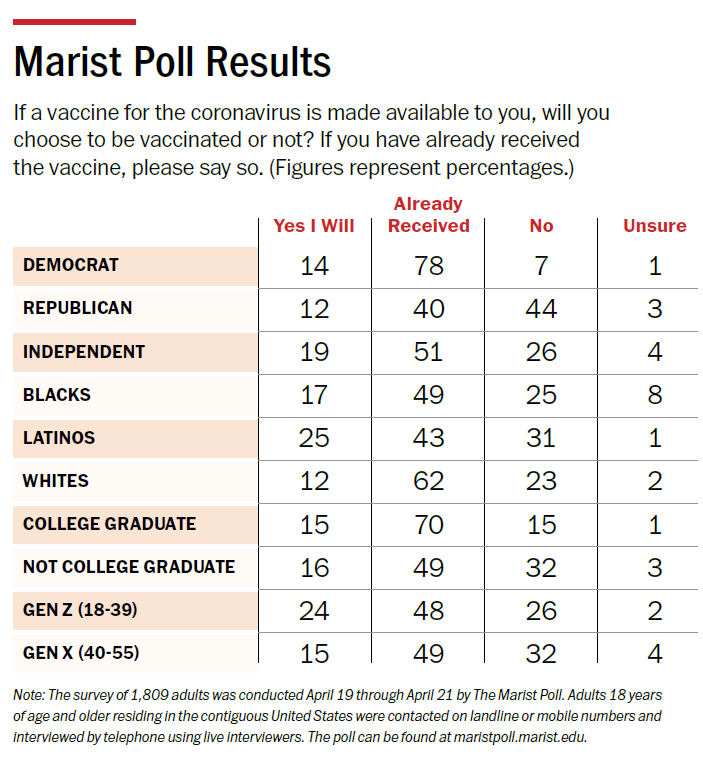 Molinaro said others face real-world challenges: working adults who find it difficult to carve out the time needed to travel to a clinic because they have multiple jobs or serve as caregivers for loved ones; or immigrants whose English is poor. Lisa Lee, an associate vice president and a research professor of population health sciences at Virginia Tech, cites those same issues and others in an essay for The Hastings Center, a bioethics think tank based in Garrison, about vaccinations in rural areas.

Sagging demand in rural areas may reflect problems other than hesitancy, and asking people to become vaccinated in the interest of public health means “we must provide them with reasonable means to do so,” Lee wrote.

For rural areas like those in Dutchess and Putnam, “it might mean setting up a community-led vaccination site in a church lobby, a local store or restaurant, a food pantry, or a gas station parking lot,” said Lee.

Dutchess County’s Vaccine Outreach Coalition is undertaking a “strategic and aggressive” outreach effort, said Molinaro. The county also is organizing work-site clinics in partnership with some of the county’s largest employers, he said, including the Gap distribution center in Fishkill and GlobalFoundries in Hopewell Junction.

“We will get there,” Molinaro said.