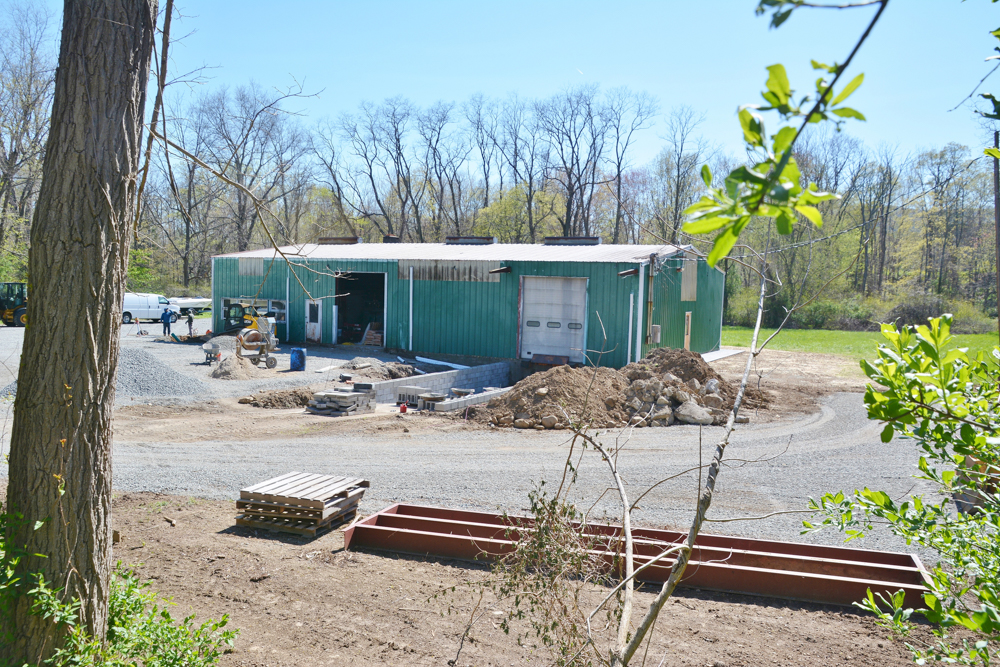 Upgrades are underway at the warehouse acquired by Downey Energy on Brook Street in Nelsonville. (Photo by L.S. Armstrong)

Nelsonville board also sets budget for 2021-22

A Nelsonville warehouse has a new owner but not a new use and does not require a building permit, village officials concluded this month after residents questioned activity on the site.

The building, at 3 Brook St., between Main Street and Foundry Brook, sits on a 7.3-acre lot that contains wetlands.

In early April, after trees were removed that had partially obscured the warehouse and fuel storage tanks appeared, neighbors contacted village officials.

Cary Downey, of Downey Energy, purchased the parcel from Sandy Saunders, a Garrison farmer who, according to Nelsonville officials, continues to occupy at least part of the building. Based in Cold Spring, Downey Energy sells propane, oil and other fuels.

Its new Nelsonville tract is in a commercial zoning district, although the opposite side of Brook Street is zoned residential and has two homes.

“Unless there’s a clear violation or a clear change of use or a reason for the village to step in, legally we’re kind of bound to allow a property owner to do what they can,” Mayor Mike Bowman explained on April 19 at a Village Board meeting. Downey’s operation “is not a change of use because the zoning currently is for warehouse” activity and “it’s going to be a storage yard for new equipment.”

Katie Brennan, who lives across Brook Street, told the Village Board that “my main concern is if there’s anything flammable, in large quantities.”

“That’s not allowed, especially with the wetlands” and because the brook leads to the Hudson River, Bowman said. “If they do store trucks or any kind of filled propane canister, that would be a change of use.” He said Downey has agreed to keep the tanks 50 feet from the wetlands.

In an interview on April 12, Bill Bujarski, the code enforcement officer, said the tanks will not contain fuel, and that Downey planted new trees, although Brennan said on April 19 they do not hide the building.

Bowman said that while the village received many calls from anxious residents, others “stop me on the street and they’re happy to see the building being used because they thought it was an eyesore before.”

Downey, who was busy this week with federal Occupational Safety and Health Administration staff training, could not be reached for comment.

The budget, which takes effect June 1, anticipates collecting $412,736 in revenue (including property taxes), an increase of about 18 percent. Other revenue sources include short-term rental licensing and higher rent for the former firehouse. The budget requires spending $5,164 from the reserve, or savings, account. The property tax share remains about the same, at $284,393.

Income from the Putnam County Sheriff’s Department rental of the firehouse building will rise to $14,400 annually, from $12,000, and the village expects $4,000 in permit fees from homeowners who host short-term rentals. The board has drafted a law to regulate the practice, which it will likely fine tune in coming weeks. Nelsonville also expects an additional $1,000 from building permit fees.

The budget includes $45,000 for maintenance on village-owned buildings, such as $25,000 for roof repairs. Allocations for street maintenance and snow removal increase slightly.

A resident, Heidi Wendel, asked the board, in upcoming budget cycles, to earmark funds for the Nelsonville Woods, whose care “is a big deal to a lot of people.” The forest is largely maintained by volunteers.

In other business, the board discussed ways, including a crosswalk near Fishkill Road, to control traffic on Main Street-Route 301, a state highway. Trustee Dave Moroney said that when the village earlier inquired about a crosswalk, the state Department of Transportation said a crosswalk would not work because traffic moves too fast. The board agreed to approach the agency again.