Earlier this month, Donna Minkowitz, a Beacon resident who is gay, received a letter from Richard “Dick” Murphy, a former longtime Dutchess County legislator who lives about five blocks away. 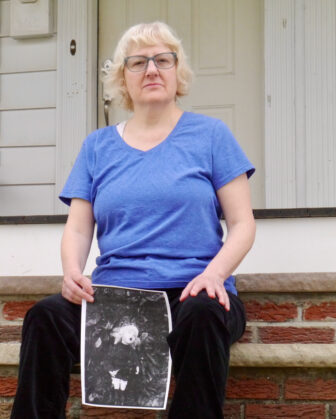 Donna Minkowitz with a photo of the 3-foot-tall doll that was left staked in her yard. She threw it away after police said they had no need for it. (Photo by J. Simms)

The typed letter, which notes at the top of the page that it is a “life alert,” asserts that while 15.9 percent of smokers get lung cancer, 16.1 percent of “active homosexuals” will get AIDS — a dubious claim. It goes on, reading like a form letter, to ask the person or company receiving the letter to no longer support the LGBTQ lifestyle. Finally, a second, smaller piece of paper requests “the courtesy of a reply” to two questions that are fallacies common to anti-gay literature:

That made her angry.

“It really felt like a threat, an act of harassment, that I should not be openly gay or speak my mind,” Minkowitz said this week.

Murphy, who represented Beacon in the Legislature as a Democrat from 1981 to 1999 after serving as chair of the city’s Human Relations Committee, says he has mailed similar letters to “a couple dozen” homes in Beacon. The reason, he says, is because local media, including The Highlands Current, have “censored” him by refusing to publish letters espousing his views. “I can’t do it with the newspapers, so I have to use the mail,” he said.

The letters aren’t meant to intimidate, nor were specific groups targeted, he claimed, but are designed to generate dialogue. “I was looking for people who would come back to me with their opinions,” Murphy said. “Those are the people I reached out to.”

Asked if any recipients had called him (the letter sent to Minkowitz included his phone number), Murphy said that “some have.” The dialogue has featured “good give and take, and that’s what a democracy is about,” he said.

Others don’t see it that way.

City Council Member Terry Nelson, who represents Ward 1, said he’s heard from at least 15 constituents who have been contacted by Murphy and/or had gay pride flags stolen from their properties. Some were frightened, Nelson said. Others were furious. None were happy.

Minkowitz said in December someone with the username “dickmurph” left a comment on her website (she is a memoir writer and former Village Voice columnist) asking where she teaches. She didn’t respond, but a few days later found a 3-foot-tall doll on a stake in her front lawn. (Murphy says he had nothing to do with the incident.)

About a month later, Minkowitz received from Murphy a printout of a letter he had written to a newspaper along with a handwritten note asking for her help in getting it published.

After finding the doll, Minkowitz took the issue to the city’s Human Relations Commission (since renamed the Human Rights Commission). A Beacon police detective told her this month that she and others who have heard from Murphy have no grounds to pursue charges because his actions haven’t met the legal threshold for harassment. However, a Beacon police representative said the department could not comment on “active cases.”

State law defines harassment as conduct that places someone “in reasonable fear of physical injury.” In the second degree, its definition includes behavior which “alarms or seriously annoys” another person and “serves no legitimate purpose.”

Minkowitz said the Beacon detective told her the police consulted with the Dutchess County District Attorney’s office and have told Murphy not to contact Minkowitz or others who have reported receiving letters.

Minkowitz says she’s undeterred and, legal definitions aside, plans to organize a demonstration against anti-gay harassment this summer.

“This has gone on for a couple of years, and we shouldn’t be subjected to it,” she said. “Beacon is a place where LGBTQ people and those who support us should be allowed to live their lives and flourish.”

7 thoughts on “What He Calls ‘Dialogue,’ They Call ‘Harassment’”