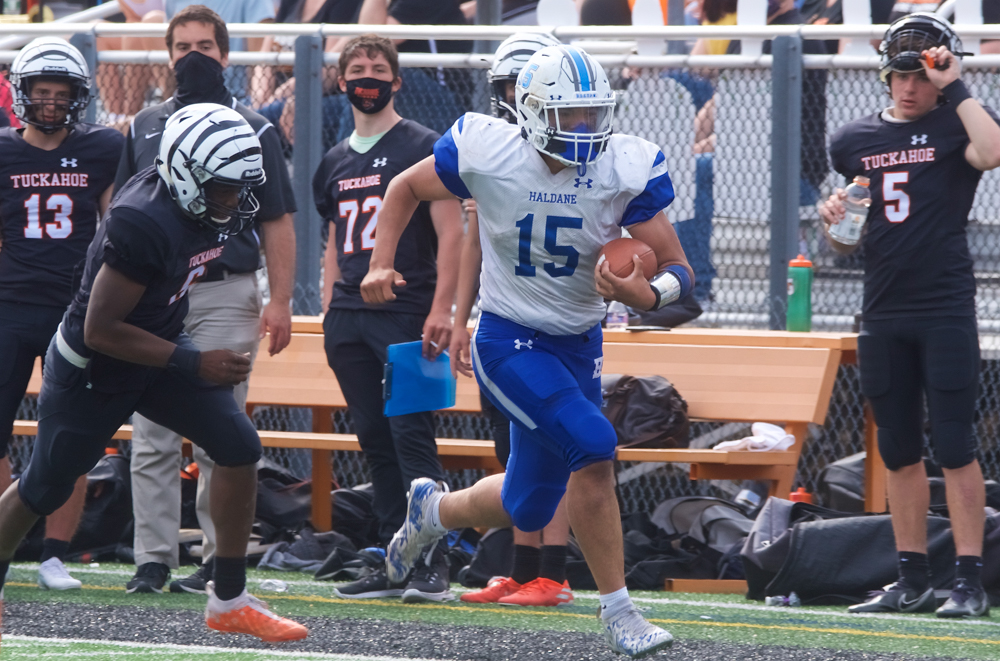 In his final game for Haldane, quarterback Dan Santos ran for 77 yards.

In the final contest of an abbreviated season, Haldane and Tuckahoe played a wild game on Saturday (April 24) that ended with the Blue Devils on the short end of a 37-36 score.

After going up 20-7 in the first half, Haldane trailed 28-20 at the end of three quarters. The Blue Devils scored twice — with Dan Santos hooking up with brother Darrin on touchdown passes of 12 and 22 yards — to open the fourth. But the Tigers scored on a 54-yard touchdown with 3:17 left to pull within two.

Tuckahoe got the ball back again with 1:28, and on third down, threw down the sideline, where wide receiver John Benke deflected the pass, then made a circus catch and fought his way to the Haldane 5-yard line with 1:01 on the clock. That led to Jason Santos’ winning field goal.

Haldane’s Christian Pezzullo scored on a 23-yard fumble recovery in the first, and Evan Giachinta had a 98-yard fumble return that gave the Blue Devils a 12-7 lead. A Dan-to-Darrin Santos 92-yard TD pass early in the second made it 20-7.

The loss was a heartbreaker for the Blue Devils, who closed their season at 2-4.

“It was a roller coaster of emotions and big plays,” said Coach Ryan McConville.  “Two rivals, and no one wanted to lose. That was one of the toughest, certainly in the top two losses I’ve had, because we had a chance to win the football game. But penalties, and that last play…”

He added: “The last game was heartbreaking, but it was awesome what we were able to accomplish” despite COVID-19 restrictions. He noted that his team was missing four players against Tuckahoe because of quarantine but that others stepped up, including Tommy Tucker, Sorin Holmbo and Luca Dillelo.

The Santos brothers, in their final game for Haldane, led the way. At quarterback, Dan Santos went 23 of 43 for 290 yards and three touchdowns but was picked off four times. He also ran 77 yards on 24 carries. Darrin Santos had 12 receptions for 167 yards and three TDs.

Beacon High School, meanwhile, finished a tough season on April 22, falling at home to Greeley, 22-6, to finish 0-4. The Bulldogs had two of their six games canceled due to COVID-19 quarantines.