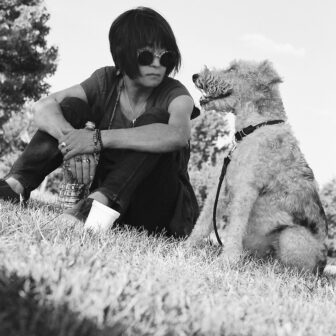 Were any of the works made in response to anti-Asian violence?

I brought it up with the artists: What shall we do? They wanted to talk about it but also they’re scared of random attacks, especially in the city. I asked two artists, one who is Korean, living in Queens, and the other Japanese, in the Bronx, and both were hesitant to take the train up here because of the “hate situation.” I said I would pick them up by car. There’s no Black Lives Matter conversation going on. This is the first time I look at my face, see that I’m Asian and feel I have to be careful.

How did you come to curate this year’s exhibit?

I was born in Japan and lived there until after college. I worked in graphics and textile design and a company hired me in New York. I became a citizen in 2016. My work was in the quilt market and I wound up having fabrics printed in my name that are sold around the world. I moved to Beacon because family members were here. Last year, board members at the Howland sent me an email to be on the gallery committee. I said yes. It’s a beautiful building and I’m only two minutes away. I started doing posters for each show. In December they asked me to be on the board, and they asked me to curate the show.

How did you find the artists?

Through the community. We wound up with Korean, Indian, Chinese and Japanese artists, ranging in age from 20s to 60s, and working in painting, sculpture, mixed media, fiber art, metal art, installation, printmaking and photography.

How did you come to be called “Hoodie”?

My last name was Furihata, and the first part of it sounded like “Hootie,” like the band Hootie and the Blowfish. So, my nickname became Hootie. An American friend said, “I don’t like it. Why don’t you use Hoodie instead?” So I did, but computer systems kept on asking me for a last name. I thought, Cher and Madonna don’t need a last name, but it kept asking. I thought about how deeply I love crescent moons. I thought Hoodie Crescent sounded nice, so I changed it legally. Now my fabrics all have this name because there’s no reason to promote my Japanese name, which people couldn’t pronounce.

On the poster you designed for the Howland show, you use the words “contempo EAST to PERFORM.” What is their significance?

Contemporary is our mutual concept. We don’t do traditional art. East is where our heritage comes from. We perform, in a way, in the space simultaneously. “Each artist’s words are in each artist’s art. Please listen to it; please feel it; please look at it.” That is my statement for anti-Asian hate. Come over to look at it — how we live in this country. Don’t say, “Go back to your country” — this is our country.