Max Beachak knows the Hudson Valley art world is competitive, especially during a pandemic shutdown. But he says he’s determined, with the opening of his Mohawk Valley Gallery in Philipstown on May 15, to “be a part of the art culture, and to have a place where young, talented artists can showcase their work.” 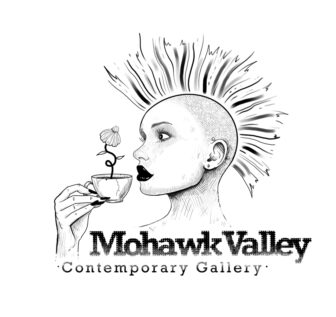 “I feel that people still want to go to a place where they can stand in front of a piece of art, take it in and feel if it’s something they want to own,” he says. “I am aiming to make my gallery a more contemporary format. Outside of the norm of having artists’ work on the walls, I want to make it more of an event space, hopefully with music from local musicians and maybe even ice cream.”

Beachak, 24, a Haldane High school grad who grew up in Cold Spring, had planned to open the gallery in October at 3029 Route 9 — the former home of Phat Cycles — then again earlier this year, but was held in check both times by the pandemic. He also works full-time as a tattoo artist in Poughkeepsie “and it’s been hard to balance the spare time you have efficiently, especially as a young, inexperienced artist.”

At the same time, he says, “opening this gallery definitely gives me a sense of accomplishment, especially doing it at a time when everyone has been so scared. It has taken an emotional toll keeping it on track, but there’s always help if you need it.

“Being an artist is such a humanitarian thing,” he adds. “The job of artists is equal parts therapy and communication. Every artist I’ve met, there’s a familiar glow to them. I recognize them as people whose sole desire is to create admirable things.”

Eventually, Beachak would like to add music to the mix, maybe host a food truck and offer the space as “an art place for teenagers” because “kids in Cold Spring need access to an arts community; I speak from experience.”

He chose the gallery’s name “for its bright sound, and I’m someone who has sported the Mohawk hairstyle multiple times.” The space, which Beachak describes as “about 900 square feet, hallway style,” is in a building owned by his father, Matt Beachak.

“When Phat Cycles moved out, he decided to let me give it a shot and rented it to me,” Max says. Other parts of the space will be occupied by his father’s woodshop and his younger brother’s mechanics shop. 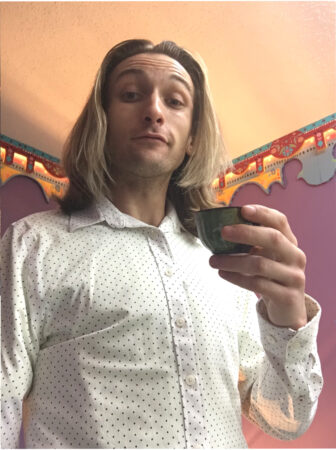 Max Beachak, during a tea break at his gallery (Photo provided)

The inaugural exhibit will be a group show, and Beachak is extending invites to a wide circle of artists. “I’m looking to develop a deep well of artists whom I can showcase,” he says. “I would like to accumulate enough artists’ portfolios to be able to group artists together who share a cohesive style.

“The Achilles’ heel of galleries as they used to be, particularly in Cold Spring, was the staleness, the antique culture. There was never a younger vibe. Beacon is becoming more of a hip spot, and we’re catching more Beacon runoff.”

Beachak is also reaching out through social media and flyers. “Of course there’s a difficulty not being on Main Street, but this space became available, and I felt like there was no other way,” he says. Beachak will also be showing some of his own work.

Beachak says he was “attracted to the arts all through high school.” He’s since explored “everything from steel sculpture to tattooing. My father and uncle own a sign company, so I was always around calligraphy. No matter what I was doing, I always admired the fine details. I knew that no matter what I was going to do, art was going to be a big part of it.”

After graduating from Haldane, Beachak “went to school to illustrate and write my own graphic novel, and through all the classes I fell in love with the sculpture class, in particular the plaster-carving project. It made me think with my hands.”

He segued into steel sculpture and welding, worked at Clutter Gallery in Beacon for a while, and then moved to “a few steel-sculpture fabrication jobs, before realizing it wasn’t what I wanted to do.”

The Mohawk Valley Gallery will be open on weekends.