This recipe saved me.

It happened one evening back when I was head cook at a summer camp in Vermont. We had just finished preparing a lovely, complicated dinner and called for the bell.

The ringing of the bell (actually a sledgehammer banged on railroad ties) signaled to the 100 or so campers and staff that it was time to gather in the meadow outside the farmhouse, share announcements, sing a grace, wash hands and come inside for food.

There was a gap of roughly eight minutes, in other words, between this bell and the descent of the ravenous hordes. 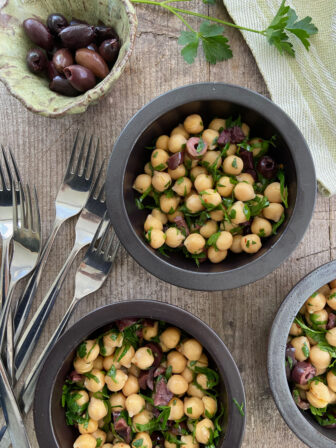 We were two minutes into that normally peaceful gap when I realized we’d forgotten to cook anything for the vegans. To neglect anyone, let alone the vegans, was anathema to me. I’d come to realize during those summer-camp summers that food has enormous power to make people feel acknowledged and taken care of. Whether I was cooking for a shy kid away from home for the first time and needing comfort, or a self-righteous diet proselytizer, I took that responsibility seriously.

But with six minutes to go, what could I do?

I ran to the walk-in and scanned the packed shelves: What? What? What? Adrenaline jerked at my thoughts. I dashed to the pantry. Five shelves, four walls: Nothing clicked. Then my eyes landed on a #10 can of chickpeas, and, just like that, miraculously, I was transported 20 years back in time to a very different setting.

On a rise overlooking a sweeping vineyard in Napa Valley sat a great table arrayed with a spectacular feast — roast lamb and chickens, figs with prosciutto, stuffed grape leaves, wild mushrooms, fresh vegetables from the garden — all arranged for a magazine photo shoot. In a little bowl on a far corner of the table sat a mixture of chickpeas, parsley, black olives, lemon juice and red pepper flakes.

This all-but-overlooked relish had suddenly rocketed through the decades and grabbed hold of my memory as I stood there panicking in the pantry.

Memory is weird. Out of nowhere, a song you haven’t heard since middle school returns to you intact. Or an ugly pair of shoes your mother made you wear to kindergarten. Go searching for memories and they elude you. But go about your daily life and, out of the blue, some random, long-lost moment pops up. How and where do such memories hide?

Well, in one of your 100 billion neurons. Or, rather, in one of the 100 billion times 10,000 pathways those neurons can form. In the past decade, neurologists have found particularly powerful links between smell/taste and our brains’ creation and retrieval of memories, as well as between memories of food and memories of place.

Thank heavens I didn’t need to understand a lick of neuroscience to be graced with the timely return of this dish. It appeared in my head as clearly as if I’d eaten it yesterday. Moreover, I somehow knew it would work as a stand-alone salad, or, better yet, stuffed in a pita. We mixed it up and had it ready to serve by the time folks had taken their seats. It was so well-received that it became a menu staple.

So: Three cheers for the power of memory!

Or maybe not. Because I later discovered that the dish I made, the one that came back to me so vividly, was actually quite different from the one my magazine colleagues had made in Napa. I had invented a new dish in the act of remembering an old one.

Big deal, the neuroscientists would say. They’ve known for decades that memory is plastic; that recollection is re-creation.

Well then, 3 times 10,000 cheers for this mysterious gray lump that sits atop our shoulders, and tosses random, fortuitous gifts in our paths — some just in time to save our suppers.

This is great on its own or stuffed in a pita with a little lettuce.

Drain and rinse the chickpeas, and set in a strainer to dry for a few minutes. In a medium bowl, combine the olive oil, lemon juice, salt, red pepper flakes and cumin. Add the chickpeas and toss to combine.