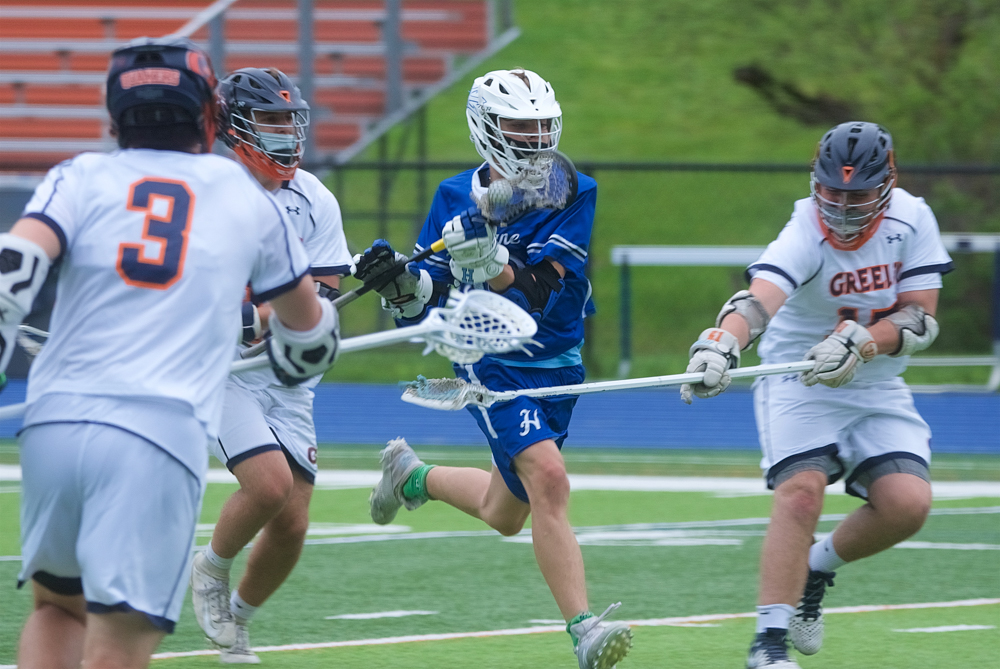 Freshman Frankie DiGiglio heads toward the net to tie the game at 7-7 Wednesday (May 5) at Greeley. (Photos by S. Pearlman)

The Haldane High School boys’ lacrosse team took Horace Greeley into overtime Wednesday (May 5) but the Quakers broke the visiting Blue Devils’ hearts with a game-winning goal with 1:02 remaining for a 9-8 win.

Haldane scored twice at the end of the third quarter on goals from Frankie DiGiglio, who tied it at 7-7 with 4:37 remaining before giving his team an 8-7 lead with 15 seconds remaining in the period.

But the Quakers tied the game midway through the fourth, sending it into overtime.

“We played it [defensively] as well as we should have,” Coach Ed Crowe said of the Quakers’ winning goal. “The kid rolled, and was able to finish.”

Crowe said he was impressed by how his young team played. Senior captain Darrin Santos — the lone starter who returns from the 2019 team that finished 15-3 and lost to Briarcliff in the sectional semifinals — led the Blue Devils with five goals and an assist and Evan Giachinta had a goal. Freshman Jordan Henkel made 20 saves at goal.

On Saturday (May 1), Haldane fell to Pleasantville, 16-2, at home. PJ Ruggiero and Giachinta each had a goal. “We had two kids with their first varsity goal, and I liked our grit and determination,” Crowe said. 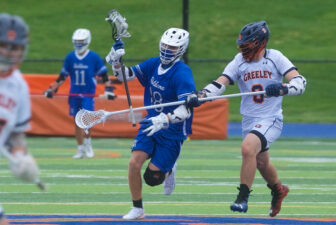 “We have good character on and off the field,” Crowe said. “Our older guys and younger guys have done a great job of mixing together.”

The Blue Devils are scheduled to host Lourdes on Saturday (May 8) at 10 a.m. and visit Bronxville on Monday.

The Haldane baseball team played its first two games on the road last week against tough opponents, losing 10-1 at Rye Neck and 11-1 at Valhalla.

Against Valhalla, senior pitcher Jack Jordan made his varsity debut and took the loss for the Blue Devils, with senior John Dwyer pitching in relief.

“We have a lot of freshmen and sophomore starters, and there’s a lot of rust to shake off,” said Coach Simon Dudar. “But we didn’t make a lot of mistakes. We had a tough first inning and gave up four runs, but after that our pitching did well; they were throwing strikes.”

In the loss at Rye Neck on Saturday (May 1), Ambrose took the loss on the mound, with relief from McCarthy. Jordan doubled and scored on a passed ball.

“That was a tough loss, but there were some positives,” Dudar said. “Our pitching looks strong, and our freshmen started to settle in as the game went on. There may have been a few jitters, and we made a few errors. But Ambrose only allowed one earned run, and Trajan, a freshman, did a great job.”

Dudar returns two starters, first baseman Vincenzo Scanga and catcher John Bradley, and seven other players — Alex Ferdico, Alex Carone, John Dwyer, Nick Marino, Ryan Merritt, Blake Bolte and Matt Junjulus — from the 2019 team that went 4-14 and lost in the sectional semifinals. The team did not play in 2020 because of the pandemic shutdown.

Besides Jordan and Ambrose, Will Bradley, Ryan Eng-Wong, Scott Bailey and Jeremy Hall joined the team this year.

“We have a lot of inexperience,” Dudar said. “But we have a lot of talent, and that needs room to grow. It will be the same for a lot of other teams” because of the shutdown.

The Blue Devils are scheduled to play today (May 7) at Pleasantville, host Westlake at 3 p.m. on Saturday and travel to North Salem on Tuesday.

The Beacon High School softball team opened its season last week with a 25-0 loss at Hendrick Hudson, followed by a 12-4 loss at Arlington on Tuesday (May 4).

“We played pretty well, coming off a tough loss to Hen Hud,” said Coach Michael Carofano. “We got good team defense, and our bats were more alive. We need to shore up more defensively and finish plays, but the girls are extremely positive, and that’s good to see.”

Carofano said his pitching staff is showing progress. “Olivia settled in nicely and had good command. Haleigh had a good offensive game and Richardson hit well and ran the bases well, and just missed a home run.”

In the loss at Hendrick Hudson, Leanna Rinaldi took the loss on the mound. Second baseman Hope Cleveringa and leftfielder Jaden Taylor each doubled.

The 25-0 drubbing “was certainly not the way we wanted to open the season,” Carofano said. “It’s been 708 days since our team took the field [because of the pandemic shutdown], and we’re relatively young and trying to find our identity. That will revolve around timely hitting and seven-plus inning defense.”

Beacon returns only one starter, senior Kelly Murphy, and two other players — Ciancanelli and Zukowski — from the 2019 team that lost to Pearl River in the first round of the playoffs.

Beacon will face Arlington, John Jay, Ketcham and Lourdes twice each during the regular season before the Section 1 tournament. The Bulldogs were scheduled to visit Brewster on Thursday (May 6), followed by a home game against Yorktown on Monday (May 10).