The next election for Congress doesn’t occur for 18 months. But a state legislator from Orange County has already announced his intention to challenge Rep. Sean Patrick Maloney, a Democrat in his fifth, 2-year term representing the district that includes the Highlands

Maloney, 54, lives in Philipstown. He serves on the Transportation and Infrastructure Committee, the Agriculture Committee and the Intelligence Committee and in December was elected chair of the Democratic Congressional Campaign Committee. 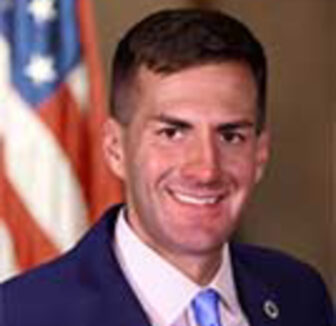 Colin Schmitt, 30, resides in New Windsor. He was elected to the state Assembly in 2018 and represents parts of Orange and Rockland counties. A sergeant in the Army National Guard, Schmitt works at his family’s real estate firm.

He launched his campaign last month, declaring that “Hudson Valley families need a strong voice in Washington who will protect taxpayers, create new jobs and stand up for our veterans and first responders.”

Schmitt promised, if elected, to “lead the fight against the radical socialist ideology that is driving [House speaker] Nancy Pelosi’s agenda and the liberal policies being advanced by Congressional Democrats.”

Schmitt faced criticism from Democrats in January when he spoke to two busloads of participants before they left for Washington, D.C., to participate in the “Stop the Steal” rally that preceded the riot at the Capitol. The Orange County Democratic Committee tweeted the image of Schmitt aboard the bus with a message accusing him of “supporting a busload of right-wing extremists” and “undermining our democracy.”

The Times Herald-Record in Albany reported on Jan. 7 that Schmitt declined to say if he supported the president’s claims of a stolen election.

When interviewed last month by Fox News, Schmitt claimed that Maloney “has voted 100 percent of the time with Nancy Pelosi” and “sold us out to get a partisan appointment” as chair of the DCCC “for his blind loyalty.”

After President Joe Biden’s April 28 address to Congress, Schmitt criticized a Democratic agenda that, he argued, “will expand the federal government’s reach into virtually every aspect of American life and finance it through massive tax increases and mountains of new debt that will impact generations of Hudson Valley residents.”

Questioned the next day on MSNBC about the president’s speech, Maloney described Republicans as having “run out of ideas. They have no interest in governing,” only in “attacking the other side” and in exerting authority, he said. “It’s going to be a while before they come back to reality and start acting responsibly again. Until then, they should not be trusted with power.”

On Monday (May 3), Jamie Cheney, a Rhinebeck farmer who owns a business that assists working parents, kicked off a campaign for the state Senate seat held by Sue Serino, a Republican who is also from Dutchess County and serving her third term. Serino defeated challenger Karen Smythe by a narrow margin in 2018 and by a more comfortable one in 2020.

Cheney, a Democrat, said that she chose to run because “as we’ve watched our community struggle throughout the COVID-19 pandemic, it is clear that upstate needs leadership and investment to recover and continue building our economy.

“As a small-business owner, farmer and mother to young children, I understand firsthand the hurdles so many families in our community faced this past year as they navigated the uncertainties of the pandemic and dealt with simultaneously working remotely and learning from home.”