William Parker to perform at Howland

William Parker, one of the New York City experimental jazz scene’s most venerated musicians and mentors, will perform at the Howland Cultural Center in Beacon on Saturday (May 15) in a show that has already sold out, although tickets are available for a livestream. 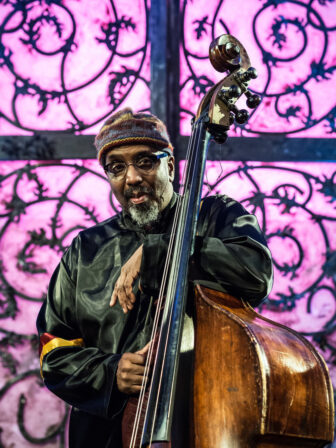 The performance, presented by Elysium Furnace Works, will feature a set with saxophonist Joe McPhee and an interview with Cisco Bradley, author of a new Parker biography, Universal Tonality.

Parker’s predominant instrument is the bass, but he also performs on the shakuhachi, a Japanese and Chinese flute; double reeds; tuba; donso ngoni, a traditional guitar of Mali; and guembri, a sub-Saharan stringed instrument. Along with European free-jazz, he has been influenced by music of Africa and the Americas.

Born in 1952, Parker started playing professionally when he was about 20. He also began composing everything from big-band music to solo and chamber works. His compositions span the range of operas, oratorios, ballets, film scores and soliloquies for solo instruments.

His output as a musician, band leader and composer has been included on some 400 albums; The Penguin Guide to Jazz on CD called him “the most influential bassist/leader since Mingus.” He is known in experimental jazz circles for his collaboration with pianist Cecil Taylor, which began in 1980. Influenced by Sun Ra and Butch Morris, Parker founded the ensembles In Order To Survive and The Little Huey Creative Music Orchestra.

Parker teaches at universities, conducts music workshops and collaborates on projects with his wife, Patricia Nicholson, a dancer and choreographer. “He has never stopped believing in improvised music as a revolutionary activity,” Bradley writes in his book.

Tickets for the livestream are $20 at howlandculturalcentertix.com. Universal Tonality is available at Binnacle Books in Beacon.