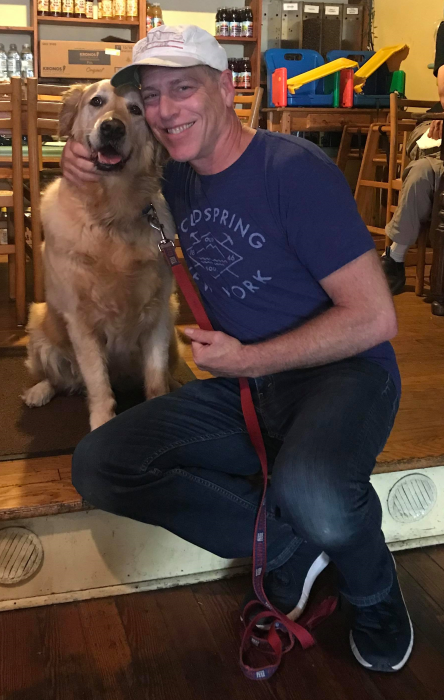 Bill Sussman and Goldie at The Foundry Cafe

Born in New York City in 1957, Bill was the son of Stuart and Suzanne Sussman. He grew up with two older siblings, Linda and Donald, in Great Neck, Long Island, and graduated from Great Neck North High School, where he was a talented student and athlete. The family also lived for four years in Frankfurt, Germany.

Bill held a degree in agricultural economics from Cornell University and an MBA from New York University. He put his sales skills to work at Xerox and Accenture before working in information technology, most recently for Palo Alto Networks and Cohesity.

He and his first wife, the former Arlene Orenstein, raised their sons, Harrison and Matthew, in Dix Hills. Bill was a dedicated, enthusiastic and hands-on dad at home and on the athletic fields, traveling across the country and even abroad to cheer on his sons in competitive soccer, his family said.

He moved to Cold Spring in 2016 and became known for his daily walks with Goldie, his Golden Retriever. He was a regular at The Foundry Cafe, where he loved to update staff and customers on the restoration of his historic home on Furnace Street. (In 2018, he shared a coincidence related to the house with The Current.) When the renovation was complete, the front porch became Bill’s favorite spot for catching up with neighbors with his future wife, the former Jennifer Stahlkrantz.

During his years on Long Island, Bill enjoyed winemaking and passing that art on to others. When he settled in Cold Spring, he enrolled in cider-making courses at Cornell and established Cold Spring Ciderworks, producing small-batch dry cider.

“I wanted to make really good wine,” he told The Current in 2019, recalling how in his 20s he made wine in his parents’ basement on Long Island. The problem, he realized, is that New York’s climate is not ideal for fine wines. “Riesling can be good, but overall the wine will never be great.”

Bill and Jennifer purchased a farmhouse in Pound Ridge in 2020 and reveled in their good fortune of finding such a beautiful setting in which to marry, build a life together and produce hard ciders.

Along with his wife and sons, Bill is survived by his brother, Donald Sussman (Karen), and an uncle, Robert Tobey (Gail).

Memorial gifts may be made to the Nurses’ Education Fund or the Yablon Cancer Center at Northern Westchester Hospital (nwhconnect.org).