A sculptor, designer and painter whose social and artistic circles included Willem de Kooning and Jackson Pollack, Constantino Nivola was born in Sardinia in 1911, the son of a mason. The passing of those skills from father to son laid the foundation for Nivola’s large-scale reliefs, often used as building facades.

An exhibition on Nivola’s work that opens at Magazzino Italian Art in Philipstown on Saturday (May 8) consists of about 50 objects, including sandstone reliefs, made first in plaster, then concrete; sculptures; and architectural maquettes, or models. The focus is Nivola’s trailblazing sandcast sculpting techniques. 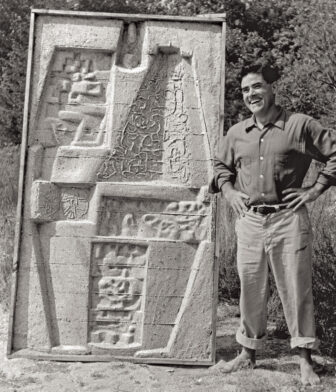 Nivola in the garden at Springs, East Hampton, in the mid 1950s, with the model for William E. Grady Vocational High School (Photo by Richard Stein)

After attending an institute for the industrial arts and apprenticing for an artist, Nivola moved to Milan, where he began working as a graphic designer for Olivetti. With war approaching in 1939, he and his wife, Ruth Guggenheim, who was Jewish, fled Italy for Manhattan.

After trying to make ends meet for a few years, Nivola became the art director for a number of journals, says Teresa Kittler, Magazzino’s 2020/21 scholar-in-residence, who curated the show with Chiara Mannarino.

The couple bought a house on the beach on the eastern end of Long Island, “where they and their children spent a lot of time playing in the sand,” she says. “It’s interesting that the sandcasting, which Nivola developed in the late 1940s, came about through trying to do something through an everyday activity.” 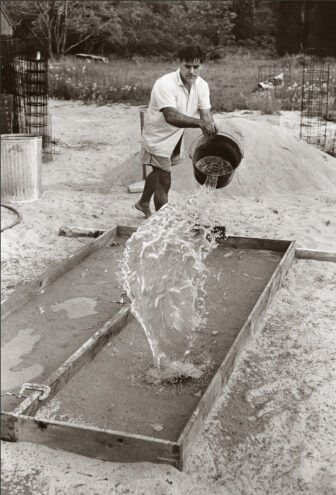 The technique involved carving into wet sand and filling the negative space with the material which became the sculpture and, later, the piece of architecture. Under the mentoring of architect and designer Le Corbusier, Nivola kept experimenting. In 1953, he was commissioned by Olivetti to create a mural in its Fifth Avenue showroom.

“Not only was the scale vastly more ambitious, but he had to think about the practicalities of making and installing this large-scale work,” Kittler says. “So he turned his studio outdoors, creating a garden studio. There are wonderful images of him turning portions of gardens into trenches, then casting with a thin layer of plaster, reinforced with cement, built up with concrete later.”

Once they’re cast, a layer of sand is locked in, “giving an almost stone-like quality to the reliefs,” she says. “He’s taking this working material and giving it this quality of something much richer.” 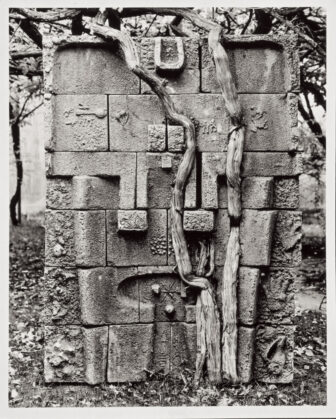 Wall with relief, from the Building Blocks series, in the garden of Nivola’s home in Springs, East Hampton, 1955

Nivola’s early experience in masonry and construction became useful as he calculated how to transport and install extremely heavy pieces with cranes, trucks and trains. He was using “modern, cheap materials on a monumental scale, involving coordination, and transportation challenge in an ordinary to extraordinary transformation,” she notes.

Nivola’s work began to gain attention in Italy. He also was a social “center of gravity” for a large group of artists, says Kittler. “In some ways he was quite shy, but also charismatic, energetic and spontaneous, and he hosted lots of events at his house — big barbecues, with music.”

Magazzino co-founder Giorgio Spanu, a fellow Sardinian, has been interested in Nivola’s work for years, says Kittler, who is a lecturer in modern and contemporary art at the University of York in the U.K. “This project has been in the pipeline for many years, and now felt like the right moment to be thinking of an artist who was interested in the intersection of art and architecture. It’s quite exciting to show works rarely exhibited and to bring together the work from various institutions.”

Magazzino Italian Art, located at 2700 Route 9 in Philipstown, is open 11 a.m. to 5 p.m. from Thursday to Monday. For reservations, see magazzino.art/booking. The exhibit, organized in collaboration with the Sardinian-based Nivola Foundation and the Italian Embassy in Washington,  continues through Jan. 10.