The May 6 public hearing on Cold Spring’s proposed law to regulate short-term rentals set the stage for a May 18 workshop at which the Village Board will consider possible revisions. More than 50 residents attended the hearing, held via Zoom.

The proposed changes to the village code include about 20 provisions that would govern short-term rentals such as those booked through Airbnb — and range from using a lottery system to select operators, allowing a maximum of 34 in the village and prohibiting any from operating within 300 feet of each other, to limiting rentals to owner-occupied buildings, allowing a maximum of 60 rental nights per year and requiring two-night minimum stays.

One resident, Eliza Starbuck, hinted at the challenge the board faces. “There are 655 houses and 655 points of view in this village” on the issue, she said.

Starbuck covered various points, including the need to prevent people from “playing Monopoly with our village, buying up properties and turning them into Airbnb hotels.” When that happens, she said, “we lose a lot,” including “the families in those residences and kids in school and playing on the block.” She advocated a tiered system with fees and regulations that consider different scenarios.

Aaron Wolfe felt the proposed law was “very good. It’s fascinating to hear people say something is being taken away from them when STRs have been illegal in the village since the [current] code was put in place,” he said.

Alex Miller, who has hosted more than 350 guests in his Main Street rental over eight years, said he has had no complaints from neighbors. “People are much more respectful of a true shared property” where the owner also resides on the property, he said. He said his unit conservatively generates $20,000 a year in business for restaurants and retailers.

Irene Pieza said she uses short-term rentals when she travels but also has three operating within sight of her Paulding Avenue home and understands concerns that neighborhoods can be turned into “more of a business district.”

John Lane is part of a group of Cold Spring operators that has written to the board expressing concern over the proposed law. Lane said he supports requiring rentals to be owner-occupied but opposed several provisions such as the lottery and regulated minimums and maximums.

Phil Heffernan, who operates an Airbnb on Church Street with Denise Friedly, said his first impression was that the law is “a solution in search of a problem.” He called the proposal “a place to start” but compared it to putting fingers in holes in the dike when there is no impending flood. 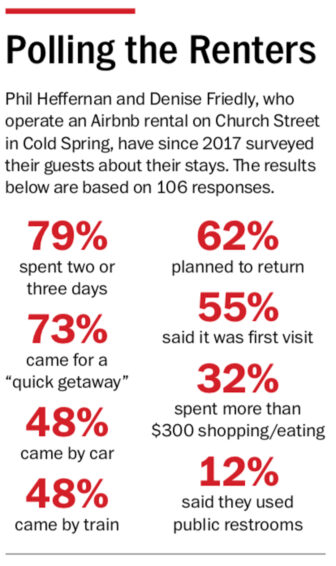 Matt Francisco, who is a candidate for the Village Board, disagreed, calling it “a thorny issue” that “needs to be addressed,” noting that the contentious 2019 public meeting made it clear some regulation is desired.

David and Melia Marzollo, who run a short-term rental on Main Street, said the proposals should be relaxed because of the pandemic. “This is one of the most trying financial times,” David said. “Having an STR has saved a lot of people.” With their regular business closed, “it was the only way we could pay our mortgage,” Melia added. She urged the board to select one or two key areas and develop regulations to address them.

Regulating excess noise was one issue that brought widespread agreement. Tom O’Quinn, who owns a short-term rental in Palm Springs, California, said the city imposes stiff fines that have put an end to problems. “You cannot have any music outside your house — ever. Guests get fined $1,000,” he said.

Michelle McCoy and Shelley Gilbert both complained of excessive noise, outdoor parties and other disruptive behavior at Airbnbs near their Mountain Avenue homes.

In response, Nadia Lee, who operates one at 27 Mountain Ave., was apologetic for the behavior of some of her guests in the past, saying as hosts they had learned from their mistakes and no longer allowed large groups. Their STR has remained closed during the pandemic, she said. She advocated a “mid-range approach” to regulations, so the rules don’t “destroy opportunities for hosts.”

Tracy Bunye fears the proposed law would be detrimental to families who rent their homes only occasionally. “We go on two short vacations a year” that are paid for by renting out their home, she said. “This law is clearly not meant for people like us.” A number of Cold Spring families also rent out their homes once a year, during West Point graduation.

The village clerk will accept written comments on the proposed law by mail or email until 4 p.m. on Tuesday (May 18).