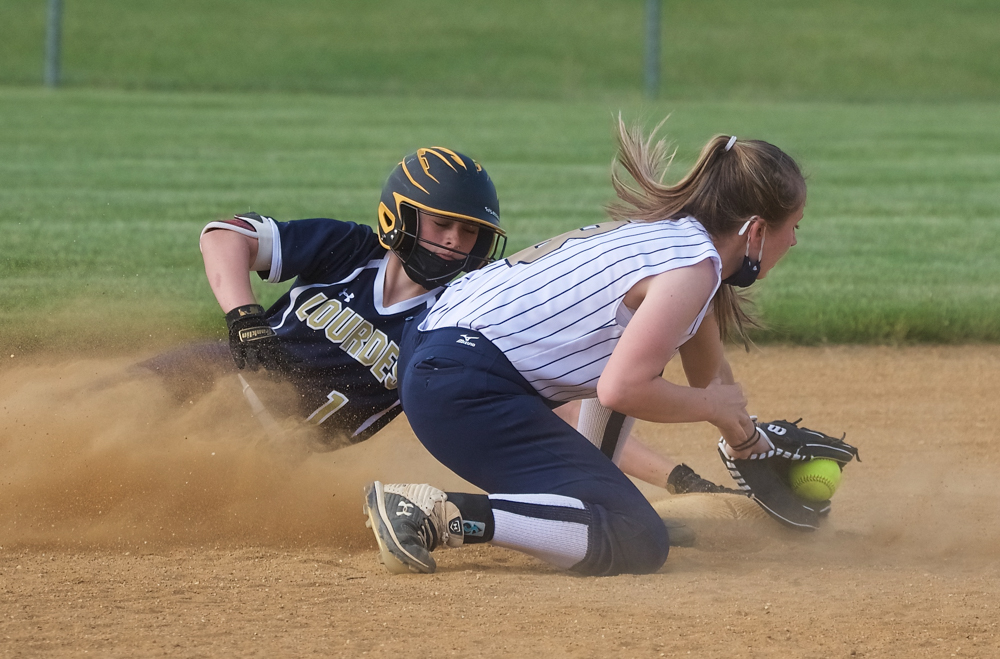 Beacon High School girls’ lacrosse has struggled so far this season but picked up its first victory on Monday (May 17), 9-3, on the road against Yonkers. 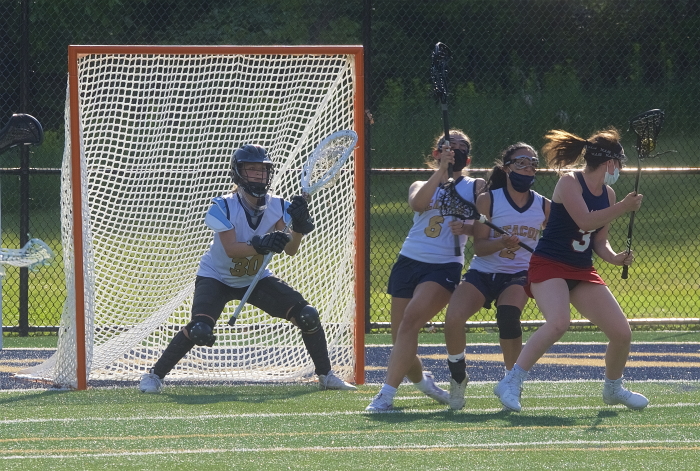 Beacon keeper Isabella Boswick gets ready to face a shot against Wappingers. (Photo by S. Pearlman)

“It was nice to get that win,” said Coach Brian Lange. “But more importantly, the girls showed exceptional sportsmanship. They played good, clean lacrosse, and we were able to get all of our girls in the game.”

The next day, the Bulldogs suffered a 17-2 loss at home to a combined team of players from Ketcham and John Jay. Senior had a goal and an assist, and Casserly had Beacon’s other goal. Boswick was busy with 16 saves.

On May 14, Beacon lost to Putnam Valley, 11-3, with Senior scoring all three goals and Boswick recording 16 saves.

“We’re playing a tough schedule, considering we haven’t played in two years,” Lange said. “The girls have been making adjustments.”

Beacon is scheduled to host Lourdes on Monday (May 24) and James O’Neill on Wednesday.

The Beacon High School softball team played well late on Tuesday (May 18) against visiting Lourdes but ended up on the wrong end of a 16-5 decision.

Olivia Ciancanelli took the loss on the mound for the Bulldogs (1-8). At the plate, Olivia Spiak went 4-for-4 with two runs scored, Haleigh Zukowski was 4-for-4 with three RBI, and Leanna Rinaldi went 2-for-3. 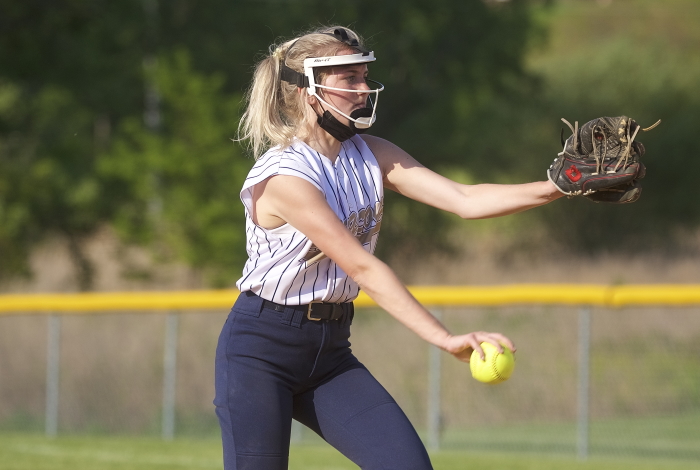 “We dug ourselves a hole in the first three innings with a lack of energy and focus,” said Coach Michael Carofano, “but we had a great last four innings defensively. We played like the team I know we are capable of being.”

On May 14, Beacon lost, 7-2, to Wallkill. Ciancanelli took the loss on the mound but allowed only two earned runs. Spiak went 2-for-4 with a double and a run, Rinaldi was 2-for-3 and Bernadette Kish was 3-for-3 with one RBI. 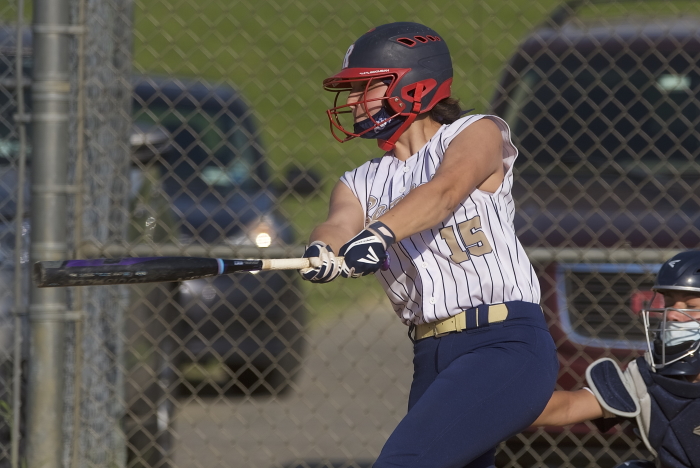 Haleigh Zukowski went 3-for-4 and drove in three runs for Beacon in a loss to Lourdes. (Photo by S. Pearlman)

“We were much more competitive this time around against a well-coached Wallkill team,” Carofano said. “Untimely errors and quiet bats were where we struggled. I was proud of the job Olivia did pitching.”

“The girls are continuing to work on the skills that we’ve been struggling with,” he added. “We’re trying to cut down on big innings by opponents.”

Beacon was scheduled to visit John Jay East Fishkill today (May 21) and travel to Byram Hills on Saturday.

The Beacon High School baseball team came from behind on Tuesday (May 18) in a game played at Dutchess Stadium to defeat Lourdes, 10-7.

Mike LePere went 3-for-3 with a double, a triple and four runs scored. Matt Manzoeillo went 2-for-3 with a triple and two RBI, Tyler Haydt doubled and drove in three runs, and Mikey Fontaine had an RBI in the win.

Manzoeillo picked up the decision on the mound, going four innings and striking out seven.

“When the going got tough, JJ Mazzacone slammed the door shut on the Warriors by striking out five in three scoreless innings to earn the save,” said Coach Bob Atwell.

The week before, Beacon got no-hit by Yorktown in a 9-0 loss; the Bulldogs earlier had handed the Cornhuskers their first loss of the season. Owen Browne, JJ Mazzacone and Owen Bozsik pitched in the loss for the Bulldogs.

Haldane picked up a 12-0 win in five innings Monday at Peekskill, with Julian Ambrose earning the win. He allowed two hits and walked four. Ryan Merritt pitched a clean fifth.

Jeremy Hall and John Bradley each knocked in three runs for Haldane, and Jack Jordan, Trajan McCarthy and Ambrose each had an RBI.

“Eng-Wong came off the bench, and with the bases loaded got his first varsity hit, a two-run double,” Coach Simon Dudar said. “John Kisslinger, Julian Ambrose, Jack Jordan, and John and Will Bradley continued to swing hot bats and kept us in the game with some timely hitting. But you can’t win games with that many errors.” 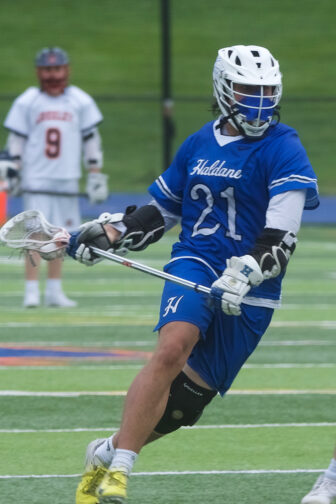 Darrin Santos scored the game-winner in overtime for Haldane in a 15-14 victory over O’Neill.

Haldane won a thriller on Saturday (May 15) at O’Neill, 15-14, on a goal in overtime by Darrin Santos, who finished with six.

Before the game, O’Neill dedicated and named its field for Debbi Crowe, a longtime athletic director, teacher and coach, and the mother of Haldane Coach Ed Crowe.

On Tuesday (May 18), the Blue Devils fell to Croton-Harmon, 19-9, on the road. The team is scheduled to visit Sleepy Hollow on Monday and North Salem on Wednesday.

Haldane’s track-and-field team has been getting leadership from seniors Ben McEwen and Jake Patinella, junior Luke Parrella and sophomore Andriea Vasconcelos, according to Coach AJ McConville.

“Our middle-distance runners, as well as our newcomer middle-distance girls, are running well,” he said. “Patinella is looking good in the throwing events after missing the last year. We’re ready for some good performances in the coming weeks with our league championship, county meet and class meet.”

Haldane will travel to the North Rockland Red Raider Relays on May 29.