A wide view of the exhibit (Photo by Cassie Ward)

History museum looks back at leisure

Few who move to this neck of the woods fail to appreciate the landscape and its opportunities for outdoor recreation. That has been a lure, in fact, for centuries.

The Putnam History Museum’s latest exhibit, Putnam at Play, makes this clear in an overview of leisure and lifestyle in Putnam County from the mid-19th through the mid-20th centuries via everything from vintage postcards, tickets, receipts, advertising and early sports uniforms, to a 19th-century model of the Hudson River Dayline steamboat Mary Powell.

The museum notes that before the mid-1800s, “leisure activities were typically reserved for the wealthy, who had both the time and means for recreation.” That began to change as incomes rose and workdays grew shorter. In addition, social constraints loosened and recreational activities opened up to women, though non-whites were still largely excluded. 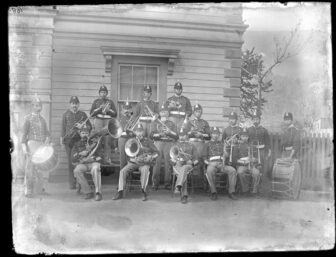 The exhibit is organized by activity, rather than chronologically, and includes automobiles, railroads, steamboats, river ferries and other means of transportation; winter recreation, camps, resorts, clubs, estates and sports (recreational and spectator), such as baseball and cycling. There is also information about the Green Book travel guides, which provided information on hotels, restaurants and other facilities at which Black travelers were welcome during the Jim Crow era.

Nick Capicotto, the museum’s temporary education and program manager, who assisted with research, artifact selection and installation, was struck by the present-day parallels. “In the late 19th and early 20th century, more people were doing office jobs, and they were made conscious of being cooped up all day inside and the effect on their health,” he said. “Putnam County was promoted for its fresh, natural air, hiking trails and recreation on the river. We found a guide called Health and Pleasure published by the New York Central Railroad in 1893.” 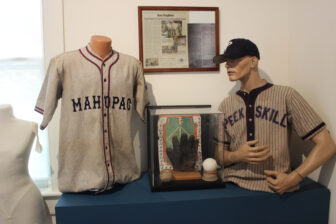 The exhibit includes vintage uniforms and other memorabilia. (Photo by A. Rooney)

John Duncan, the museum’s collection manager, said that until about World War II, Putnam had a “half tourist/half leisure economy” but then shifted to a bedroom community whose residents commuted into New York City. “All transportation and the initial activities started as elite, then became more affordable,” he said. “The rise of the middle class created fewer working hours, an increase in income and more leisure time. The estates were still there, as were the traditional upper-class leisure spots, but there was a growing middle class.”

Duncan said the biggest surprise from his research was that “there was an extremely broad variety of specialized destinations and activities; every tiny subsection of every group you could think of was represented county-wise.”

Research for Putnam at Play was done initially in person, then finished off from home by Duncan and Executive Director Cassie Ward over the winter. Selecting pieces to use was a challenge, according to Duncan, “because there was such an abundance of material. A lot of what you see is from the mid-to-late 1800s. We probably could have filled this room up again a second time.” 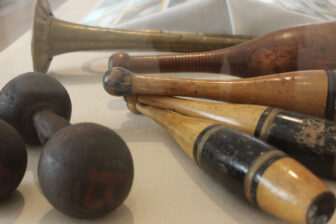 The exhibit features a collection of exercise clubs such as those used at Bill Brown’s Physical Training Farm, a Garrison resort. They are swung in patterns. (Photo by A. Rooney)

Capicotto estimates that as much as 85 percent of what is on display came from the museum’s collections, with the balance on loan from collectors. With the aid of several college interns, the staff pored through the collections, using dedicated archival aids to make the boxes of documents more easily searchable, until slowly the exhibit took shape.

“It’s like writing a three-dimensional research paper: you find all these sources, then they dictate how the paper evolves, and finally the overarching themes become much more clear,” Duncan explained.

Capicotto was hired with a grant from the National Endowment for the Humanities. Along with Putnam at Play, he has worked on a permanent outdoor exhibit on the West Point Foundry. There have been seven such exhibits on the lawn of the museum since October.

The museum also has a second exhibit, HerStory: Putnam County Women and the Vote, which saw few visitors because of the pandemic shutdown and so has been extended.

Ward notes that, inadvertently, because of the pandemic, much of Putnam at Play has wound up being topical. “What’s interesting,” she said, “is how outdoor recreation and back-to-nature started to have its day in the sun again this past year, with everyone feeling cooped up and wanting to be in nature, so this showing of the origins of recreation here became timely.”

The Putnam History Museum, at 63 Chestnut St. in Cold Spring, is open from noon to 4 p.m., Wednesday through Sunday. Admission is free, although a $5 donation is suggested. Pandemic safety precautions are in place. Groups should make reservations by calling 845-265-4010.