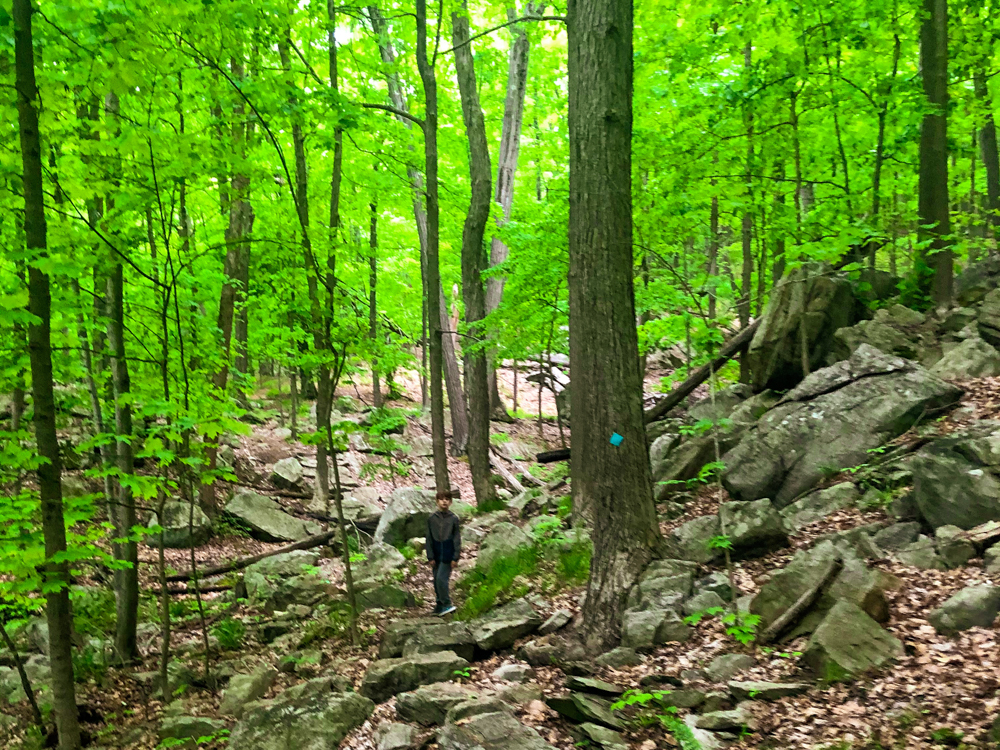 The writer’s son learns the rocky, wooded pleasures of the teal trail in Philipstown. (Photo by B. Cronin)

My 9-year-old son has climbed some of the highest mountains in the Catskills. But if you gave him a choice of a one-hour local hike or a three-hour visit to the dentist, I’m pretty sure he’d pick the dentist.

As a master of efficiency, he manages to pack a week of complaining into the time it takes him to put on his hiking shoes. He will remind me several thousand times throughout the hike that walking down at Dennings Point or even around the neighborhood is the last thing in the world he would like to be doing and is taking away from valuable Minecraft-and-Hanging-Out-with-Cats time.

And yet there he was last weekend, bounding through the Highlands, yelling not that this was torture, but for me and my girlfriend to keep up. I would like to say that this sea change was the result of excellent parenting, but even for a column that The Current labels as opinion, that’s a mighty stretch. I think it was mostly because we weren’t just hiking, we were looking for clues.

We were on the Highlands Trail in Philipstown as part of what the Haldane School Foundation hopes will become an annual event: The Haldane Geocache Hike. As Ezra Clementson, one of its trustees, explained, the foundation usually raises money by having “big, killer parties” that were killed by the pandemic. HSF hopes the parties will return in the fall, but in the meantime it had to figure out how to have an event that people could take part in, on their own, outside, anytime they wanted.

A plan was hatched: First, a raffle that anyone can enter. Then, if you want to improve your odds, find clues in the woods. Participants spent last weekend searching across three local trails where HSF had hidden markers with QR codes. Every code you scanned with your phone increased your chances and gave you a clue to find the next marker.

It was not quite “geocaching,” which typically refers to following GPS coordinates to locate caches in which participants stash tokens and tchotchkes such as toys, coins or stamps. In March, when my son and girlfriend and I took a hike to find Putnam County’s mysterious stone chambers, we accidentally found a geocache stash within a chamber wall. (My son located a particularly alluring pebble to leave for future explorers.)

But no one was picking nits, because the adventure was simple enough for kids to get excited about, as evidenced by my son bouncing ahead. He didn’t even know about the prizes. He was just excited that instead of one of Dad’s Dumb Boring Hikes, we were on a Secret Scavenger Hunt. He was excited about all the rocks, too. “It’s like a rock playground,” Clementson acknowledged. “I lose my kids bouldering there. Bonkers fun for kids.”

Clementson said HSF hopes to expand the hike next year, including to some of Fahnestock’s interior trails. Although the hike does raise money, it’s also meant to introduce locals to trails in their own backyard. The hike we did, which started on Fishkill Road, comprised a mile-long section of the teal-blazed Highlands Trail, a work-in-progress that will connect Pennsylvania to Connecticut through New Jersey and New York.

Clementson referred to the Highlands Trail as a “secret,” which is true in the sense that nobody seems to use it. While Breakneck Ridge, Mount Taurus and Mount Beacon draw mobs of tourists on weekends, the rest of the trails remain sparsely populated. Sometimes it’s easy to see why. The Highlands Trail hike offers no Instagrammable views, no braggable amount of vertical gain, and it’s hard to imagine anyone traveling from far away for such a short hike. So there was simply the quiet joy of being in the woods, climbing on rocks, looking for newts and examining plants. In other words, it was perfect.

The state has joined Clementson in urging hikers to look beyond the obvious. A campaign unveiled this week urges hikers to seek out “trails less traveled.” Its timing may not be a coincidence after the announcement that the free permits visitors needed on summer weekends to visit the Blue Hole swimming hole in the Catskills will now be required on weekdays, will extend to hiking trailheads on that road and will cost $10.

I’ll have more to say about overcrowding and the outdoors in the months to come, but for now, it’s worth remembering that however crazy Route 9D at Breakneck gets, there’s still an embarrassment of great hikes in the Highlands, all blazed and marked on maps, waiting to be explored by families.