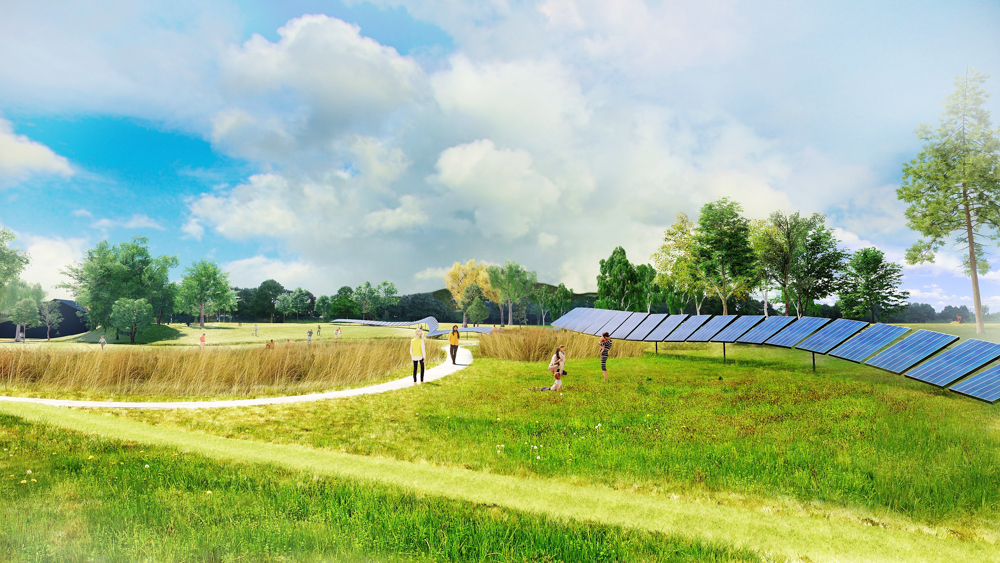 A rendering of the path and "solar ribbon" the Desmond-Fish Library had planned to install in Garrison.

The Desmond-Fish Public Library in Garrison has dropped immediate plans to add a “ribbon” of solar panels to its landscaping but continues to pursue town approval for a walking path and enhanced gardens on its 11.5-acre campus.

In a May 13 letter to the Philipstown Planning Board, which is reviewing the project, Anita Prentice, president of the library board, attributed the removal of the solar installation to costs and delays in grant funding and to the library’s need to focus on hiring a new director after the departure in April of Jen McCreery, who took a job in Chatham.

The design had called for placing solar panels atop poles arranged in a winding pattern on the library grounds.

In her letter, Prentice wrote that library board members “remain committed to developing a strategy for renewable energy,” but decided in the meantime to contract with a regional solar farm “to purchase sufficient credits to offset the library’s full electrical requirements.”

Although a public hearing in February produced only a few comments, mostly in favor of the project, residents at a second hearing in April expressed misgivings.

“We regret that the individuals so opposed to it now did not speak up two years ago when we invited comments” on the plan, Prentice wrote, observing that one critic was on the library board two years ago when the initial work was underway, and another had gone through the library’s request for proposals on the project.

She also expressed disappointment at critics’ charges that the library and Planning Board were ignorant of the scenic protection overlay on the property.

A 2006 Philipstown report on scenic byways suggests scenic overlay protection for sensitive areas and Philipstown’s 2011 zoning code includes it as a way to help preserve the land’s outstanding features.

The 2006 report “was never intended to prevent a solar installation such as ours,” Prentice wrote.

When the Planning Board met on May 20, critics of the solar array praised the decision to remove it. “I know this was difficult,” said Carolyn Copeland. “We are appreciative.”

“I believe this is the correct decision, and I thank you,” added Joe Regele.

The library plans continue to include a 3-foot-wide path accessible to those with physical limitations; benches; a small bridge over a stretch of wetlands; a reading garden; and cultivation of native shrubs and meadow grasses.