At talk, says refusal to accept election results a threat to democracy 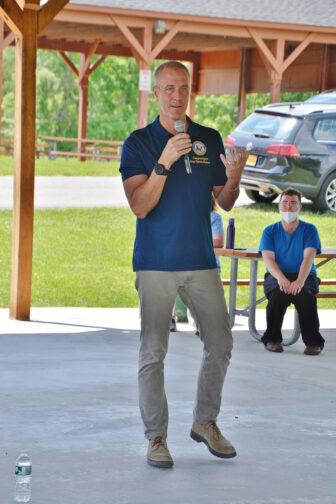 Rep. Sean Patrick Maloney at a May 23 forum in Carmel (Photo by L.S. Armstrong)

“We’re in more danger than people understand in terms of democracy in the United States — I never thought I’d say that,” he said at a “Speak with Sean” forum on Sunday (May 23) in Carmel. “Democracy does not work if you only believe in it when you win. It is over if we stop believing that when we lose an election we don’t have to respect the results.”

Maloney, a Philipstown resident who is in his fifth term, noted that he had been inside the House chamber with about 40 other members on Jan. 6 during the certification process of the presidential vote when rioters breached the building. He was positioned near the entrance when an officer fatally shot a rioter climbing through a window.

Hours later, he said, after the “lunatic” insurgents had been removed, “we’re wiping blood off the floor, stepping over broken glass and shattered wood” to resume certifying the votes.

Maloney blamed former president Donald Trump for “telling an incendiary lie” about not losing and for summoning thousands of his supporters to Washington. He also faulted Republican colleagues who, months later, still “fall into line” about Trump’s falsehoods. He said that he doesn’t want “people coming through the windows” in the Capitol and those who defend them “making decisions for you and your families. It matters that you have responsible, decent, ethical people running government.”

Many of his impassioned comments came during an exchange with a constituent who challenged him to assist those who she said remained in jail after being charged only with entering the Capitol. (In fact, most defendants have been released pending trial except those charged with violence against police officers.) “That is not our freedom,” said the woman, named Doreen. “How’s the average citizen going to tell their House and Senate that they’re unhappy?”

When Maloney asked if she believed Joe Biden had won the election, Doreen answered with a strong “no.”

“I’m telling you, this nonsense you’re spreading and reading is toxic,” Maloney said. “You have got to get out of that bubble.”

Maloney said that, since he joined Congress in January 2013, the atmosphere “has gotten worse,” making “it tough some days.” Nonetheless, he added, “it’s possible for good people to make a difference. Everything in this world does not have to be red team versus blue team politics.”

Maloney noted that he and Putnam County Executive MaryEllen Odell have joined forces in seeking federal funding for the county. “She and I don’t agree on anything” but can still collaborate on infrastructure initiatives, he said.

He weighed into foreign affairs when a constituent argued that capitalism in China has lifted up the Chinese people while U.S. capitalism benefits only certain wealthy individuals.

“There’s all kinds of ways we can make American capitalism better,” Maloney concurred. But he pointed out that China’s accomplishments coexist with devastating pollution, financial scandals, human rights abuses and political disenfranchisement. “We need to cooperate with them, compete with them, confront them,” he said.

Doreen joined in again, announcing that she shared Maloney’s opinions on China. Other attendees applauded enthusiastically.

When asked after the event for her last name, Doreen demurred. “I’m the only conservative Republican here,” she said. “I’m afraid of repercussions. There’s a lot of crazies out there.”

One thought on “Maloney: ‘More Danger Than People Understand’”