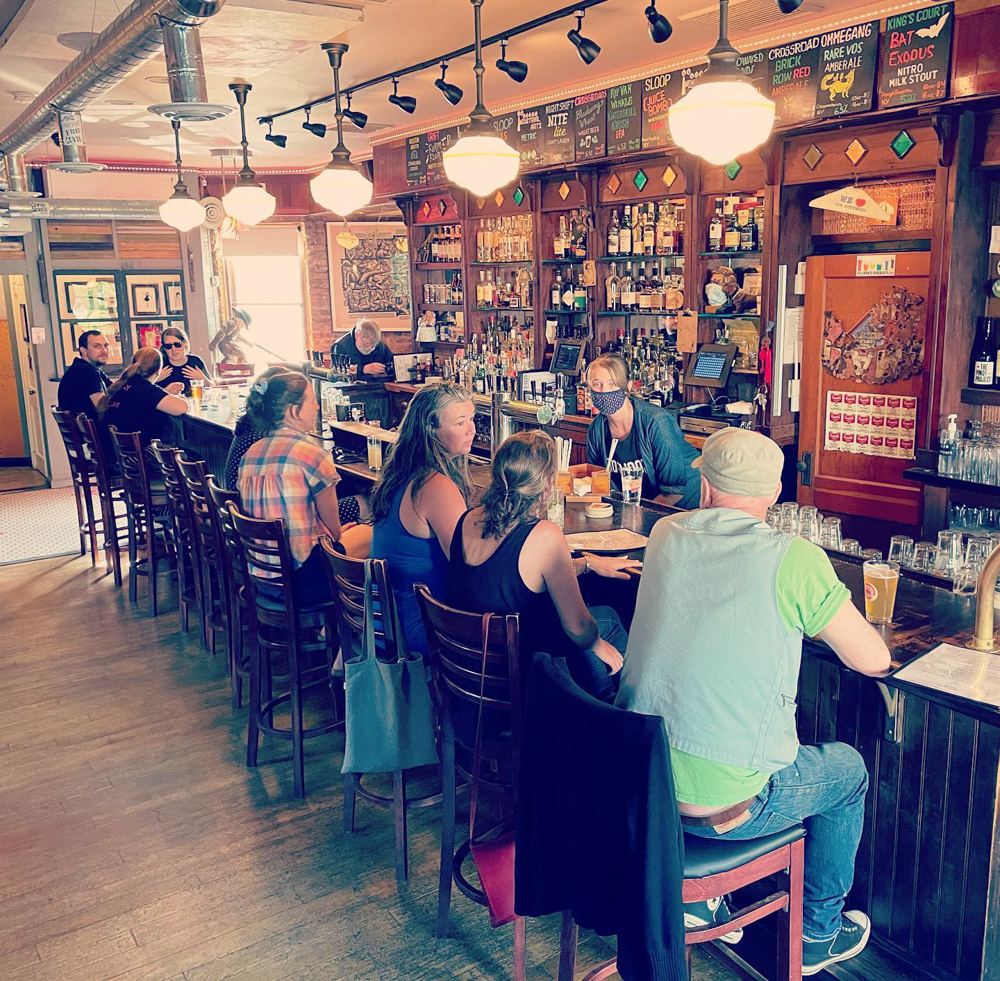 The plastic barrier has been removed from the bar at Dogwood. (Photo provided)

Incentives grow along with privileges

The Dogwood Bar & Grill in Beacon has a new look: people sitting at its bar, elbow-to-elbow, without masks.

On Wednesday (May 26), they included Toniann Hallock and her aunt, visiting from Florida, who were sharing a meal and each other’s company — perks of being vaccinated.

It has been six days since Dogwood announced on Facebook that it would remove the plastic barrier from its bar and allow patrons to take off their masks and sit close if they can show evidence of full vaccination against COVID-19, such as a paper record or Excelsior Pass on their smartphone. (Masks are still required when entering the restaurant and when not seated.)

Six months into New York State’s inoculation effort, the shots are increasingly becoming a line of demarcation and a ticket for benefits.

On May 13, the federal Centers for Disease Control and Prevention announced that fully vaccinated people could safely take off their masks and forgo the need to social distance. The guidelines, quickly adopted by New York and other states, freed people who have received the shots from rules in place since the beginning of the pandemic shutdown and codified two protocols: one for the vaccinated, and one for everyone else.

Like Dogwood, other businesses in the Highlands have introduced policies that open doors to the inoculated.

At the Happy Valley Arcade on Main Street in Beacon, people who show proof of vaccination can go maskless. The Towne Crier Cafe plans to reopen its main stage on Saturday (May 29) with separate seating for the vaccinated.

How to Get an Excelsior Pass

Like the paper Vaccination Record Card given to those who are innoculated, the Excelsior Pass provides evidence of COVID-19 vaccination. The pass is valid for 365 days after the final shot; a PCR Pass (for a nasal swab test) is valid until midnight on the third day after a negative test; and an Antigen Pass is valid for six hours after the test.

See epass.ny.gov or download the Excelsior smartphone app at the Apple App or Google Play stores. Along with the pass, you may need to present photo ID that shows your name and birth date.

Dogwood will soon restart its live music, manager James O’Connor said on Wednesday. Those who have proof of vaccination can watch without a mask. And at the Beacon Recreation Department, seniors in a Thursday painting class can go maskless with proof they have received the shots, said Heidi Harrison, a Beacon resident who works for the department.

“Now they’re back with their friends and their family,” she said. “They miss seeing faces.”

New York also joined other states in offering an increasingly robust package of incentives to motivate those who have not been vaccinated, ranging from passes to state parks to lotteries for a $5 million jackpot or a four-year college scholarship.

The full ride is the state’s latest enticement, and is similar to a program in Ohio. It offers adolescents between 12 and 15 years old a chance to win one of 50 scholarships to any public college or university in the state if they get at least their first dose of the two-shot Pfizer vaccine by July 7. For five consecutive Wednesdays, starting on June 2, the state will hold a drawing to pick 10 winners.

Teenagers 16 and 17 years old had been the only non-adults eligible to be vaccinated until May 12, when Pfizer won approval for its drug to be used in people as young as 12. About one-fifth of adolescents between 12 and 15 years old in the state have received an initial dose as of Wednesday, including 20 percent in Dutchess County and 19 percent in Putnam.

While the scholarship initiative is just starting, today (May 28) was the last day of a program in which New Yorkers received a chance to win state lottery prizes ranging from $20 to $5 million when they got vaccinated at one of 10 locations. Residents vaccinated by Monday (May 31) will receive a two-day pass to any state park valid through Sept. 30.

While some venues such as the Towne Crier will offer separate seating where vaccinated people can remove their masks and sit close during performances, others, such as Radio City Music Hall in New York City, are requiring that everyone in attendance show proof of vaccination so they can operate at full capacity under state guidelines. (Children and teens under 16, if not fully vaccinated, can provide proof of a negative COVID-19 or antigen test.)