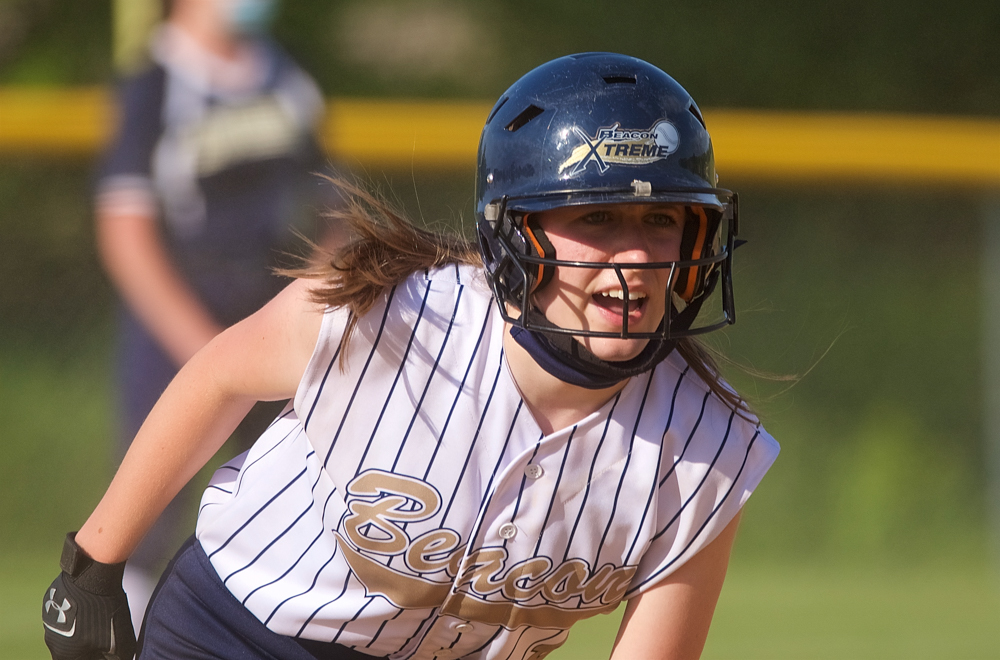 Leanna Rinaldi knocked in two of Beacon’s four runs in a loss to Arlington. (Photo by S. Pearlman)

Haldane got an epic performance on Wednesday (May 26) from senior Darrin Santos, who scored a school-record nine goals at North Salem in a 12-9 Blue Devils win. 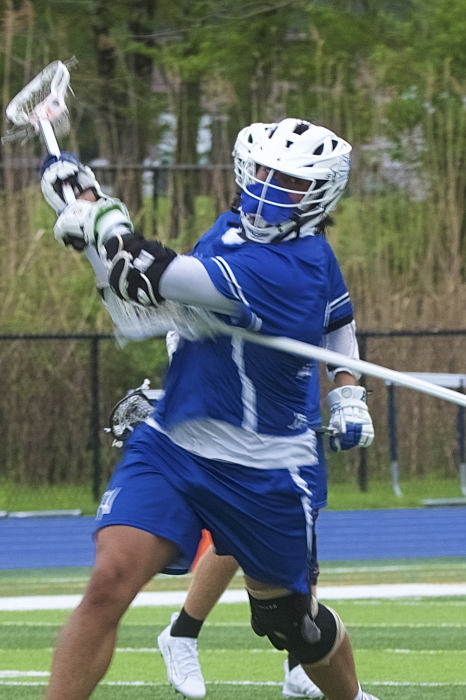 Evan Giachinta scored twice and had three assists and Dan Santos added a goal for the Blue Devils (6-6). Andrew Aiston had 13 saves in net.

“That was one of the best games we’ve played this season,” said Coach Ed Crowe. “We did a nice job moving the ball and our face-off guys — Frankie DiGiglio and Dan Santos — did a great job,” winning 12 of 16.

“Darrin was unbelievable,” Crowe added. “He had nine goals on 10 shots. And Aiston, our goalie, came in for Jordon Hankel [who broke his wrist] and won his second varsity game.”

The Blue Devils are scheduled to host Putnam Valley today (May 28) and Eastchester on Saturday before traveling to Ketcham on Wednesday to finish the season before the sectional tournament begins on June 5.

The Beacon High School softball team has continued to take its lumps, facing bigger and more experienced programs. The Bulldogs fell to Arlington, 24-4, on Wednesday after taking a 16-0 hit on Monday from John Jay East Fishkill.

On Wednesday, Briana Jones went 2-for-2, Leanna Rinaldi drove in two runs and Christina Merola had an RBI. On Monday, Merola went 2-for-2 and Jade Matias and Kyla Richardson each had hits.

Coach Michael Carofano said his players have been more aggressive at the plate “and the past two games we have limited our errors in the field.”

The Bulldogs were scheduled to play at O’Neill on Thursday (May 27), at Arlington today and home and away against Ketcham next week. 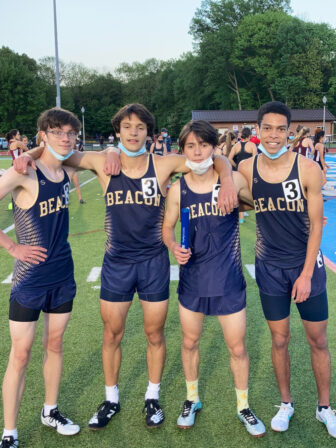 Beacon’s 4×400 relay team of Reinke, Sal Migliore, Evan LaBelle and Cader also took a first at Suffern on May 20. Beacon is scheduled to host the league championships on June 1 and 2.

Three Beacon alumni who graduated in 2016 — Rayvon Grey (Louisiana State), Terrel Davis (Hartford) and David Adams (Northeastern) — competed at the NCAA East Regionals in Jacksonville, Florida, on Wednesday. Grey qualified for the NCAA championship in the long jump and Adams qualified for the quarterfinals today (May 28) in the 400 hurdles while breaking his own school record. He must finish in the top 12 to qualify for the championship race. Davis just missed advancing in the long jump, finishing 19th of 48 competitors, 8 centimeters out of the last spot.

Beacon High School faced off against Arlington on Wednesday (May 26) and found out why the Admirals are one of the best teams in Section I. But down by 13 runs, the Bulldogs (6-7) nearly stole a victory, loading the bases in the final inning before losing 17-15. 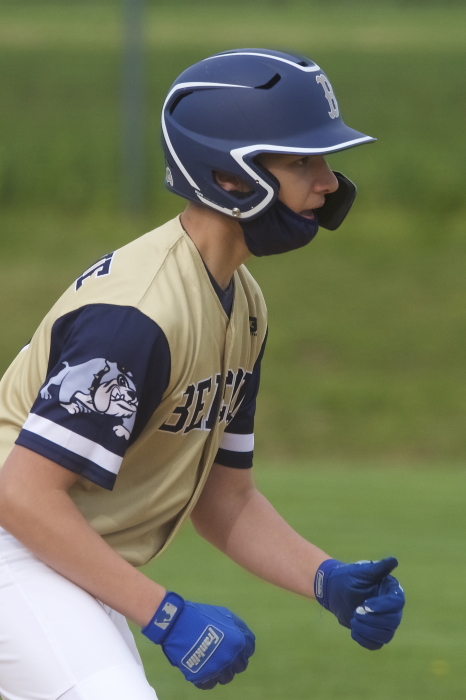 Tyler Haydt went 2-for-3 with a three-run homer; Matt Manzoeillo had a two-run double; and Jackson Jackson and Dillon Kelly each had two hits and an RBI. Owen Browne kept Arlington at bay with four innings of three-hit relief.

On Monday, the Bulldogs fell to John Jay of East Fishkill, 5-2, wasting a strong pitching performance by Matt Manzoeillo, who lost his first game of the season. Manzoeillo pitched six innings, striking out eight and not allowing an earned run. Tyler Haydt led the offense with a 3-for-4 performance, including a home run.

Beacon is scheduled to play at Arlington today (May 28) and host Somers on Saturday. It will play Ketcham twice next week before the Section I tournament opens on June 5.

Haldane lost 6-2 on Tuesday at Putnam Valley in what coach Simon Dudar called the team’s best game all season. “We’re starting to put all facets of the game together, and as I’ve said before, our goal was to always be improving with our young and inexperienced team,” he said. 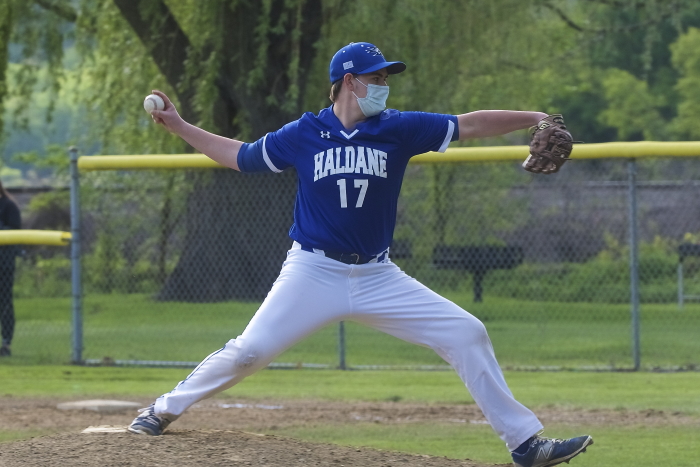 “That was his finest outing of the year, and he had some great defense behind him,” Dudar said. “Trajan McCarthy had a great diving play early on and was solid at third base.” McCarthy, John Bradley, Julian Ambrose, John Kisslinger, Jack Jordan and Jeremy Hall each had hits.

Haldane will visit Pawling on Saturday, play host Briarcliff on Tuesday at Dutchess Stadium and host Pawling on Wednesday.

The Beacon High School boys’ tennis team picked up 7-0 wins over Mahopac and Lakeland this week but lost to Ketcham.

“That was one of our best matches of the year,” said Coach David Ryley. “We’ve been playing a tough schedule, and that’s making us a better team.”

Ryley said Wyant has “taken some lumps” at first singles but has improved and that his first doubles team of Campanella and Kidd “are probably our most improved players.” At second singles, Sanderson, a freshman, has also improved against strong competition, he said.

Beacon is scheduled to host Arlington on Tuesday (June 1) and Lourdes on Wednesday.

Maria Barry of Haldane was named to the All-Section volleyball team, and she and three teammates — Megan Farrell, Meghan Tomann and Jill Weinpahl — made the All-League team.

In soccer, a 2019 Haldane graduate, Devin Heanue, who plays for Binghamton University, was inducted into the 2021 National College Athlete Honor Society.

One thought on “Varsity Roundup”