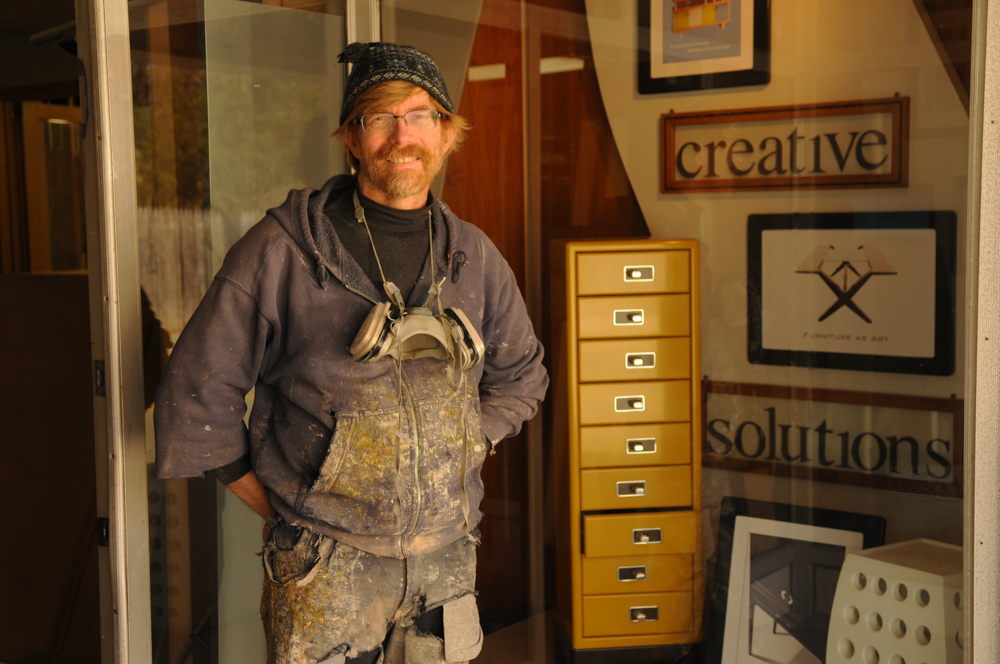 Mark Luedeman in his studio (Photo by Carol J. Barnstead)

Mark Luedeman’s tendency to see value in scraps has served him well during this pandemic year.

As a high-end furniture designer whose clients suddenly found themselves with time to focus on their homes, the Beacon resident had plenty of work but “problems fulfilling it all. Some of my vendors couldn’t deliver materials, and many of my clients’ buildings were not allowing us in, so I couldn’t deliver.”

Luedeman began creating smaller items with the materials on hand in his shop, such as mosaic trays and a line of lamps. “Limits can be good,” he says. “We have to find new markets. The last year has been a very creative time for me.”

Shifting direction has been a hallmark of Luedeman’s career. While studying biology at Lawrence University in Wisconsin, he developed an interest in plant physiology. He also taught himself black-and-white photography and created an independent study project on the chemistry and physics of photography.

He moved to New York City after a work-study program placed him with a theater and dance photographer there. After four years as a freelance assistant to professional photographers, he said he “stood back, watching the photographer talk to the client, and thought ‘I want to be the one calling the shots.’ ”

That was during an economic downturn, however, with thousands of photographers looking for work. So, instead, Luedeman began to build sets and props for use by advertising and marketing firms and catalogues.

“I built their prototypes, which ranged from small objects utilized by a model to creating the back end of a boat for a shoot,” he says. “For the first couple of years you’re scared you won’t make the rent. You just keep meeting people; stylists introduce you to people who own showrooms. It allowed me to be a good problem solver — to use my imagination.”

Luedeman’s career shifted again when he was introduced to a client who wanted themed furniture built for his 2-year-old son. That led to introductions to interior designers, and he began building for showrooms and private residences.

In 1999 Luedeman got married and, a few years later, tired of “trucking his designs all over the city —it was a lot of hustle,” he and his wife moved to Beacon. “We wanted a garden, fresher air and a place with good driving routes to the city,” he explains. With a newfound studio space, Luedeman was able to spend some time working on his own art.

The projects Luedeman was taking during this period were lucrative and rewarding in many ways but took their toll. “You’re cranking away, go to bed at midnight, then you have to go to the city the next morning,” he says. “After a couple of years, it’s like — ‘but I just want to build furniture.’ When you say what you want, when you declare it loudly to yourself, it happens. In that case, within two weeks I got a job building 10 pieces of furniture for a client on Park Avenue.”

Over the past decade, Luedeman has continued to build furniture and objects for clients on both coasts. Most of his work comes through interior designers. He balances the commissions with creating smaller pieces.

His two favorite design periods are Art Nouveau, “for the organic shapes, especially the glassworks, the ceramics, the lamps,” and Art Deco, because “it’s bold, it’s simple, and it works with glossy finishes and repetition.” In terms of process, Luedeman loves veneer and figuring out its properties on surfaces.

Calling himself “analytical” and “logic-oriented,” Luedeman says “when you start talking about curves, proportions, I didn’t follow any recipes. Proportion is supposed to come from the core.” Some clients know precisely what they want; others want an existing design “10 inches longer and in a different color. Others just say ‘Come up with something.’

“I never get to a point of head-banging with clients,” he says. “Some are so impressive in terms of knowing what they want. Some want more of my input. Sometimes it’s good not to immediately have a plan.”

Working in a studio two blocks from his home that he’s had for 17 years, Luedeman knows he is fortunate. “It’s a tough commute,” he jokes, “but in my case it’s because there is no excuse to not go in. It allows me to work in the evening until midnight if I want to, walk home in the quiet. I see beauty all over the place and just want to share what I see.”