Some people binge shop on Amazon. I binge shop at online native plant nurseries. For many species, it’s the only way to get certain plants that aren’t available locally. Demand for native plants is growing but is still eclipsed by the popularity of ornamental and exotic plants.

It’s also challenging to find straight species, instead of cultivars or “nativars” that have been bred to change the flower color, size or other traits. These plants don’t reproduce when they go to seed, ensuring that gardeners will return for more. I can collect seeds from straight species, let them go to seed and disperse or propagate them in other ways, allowing me to effectively breed it for my microclimate.

This year’s consumerism led me to a plant I saw during a walk in the Jamaica Bay Audubon Center, the only native cactus in the northeast, Opuntia humifusa, the Eastern prickly pear. While it grows well in sandy areas, it also grows well in rocky areas and I have a lot of those. 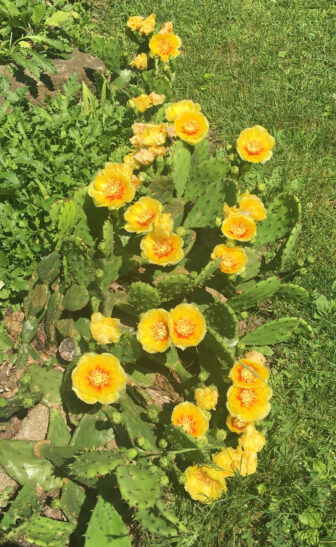 The Eastern prickly pear in bloom; the flowers give way to bright red fruits. (Photo by Joanne Palermo-Schmitt)

A favorite of native bees with large yellow flowers, it also produces edible fruit and the pads can be cooked and eaten. It’s drought-tolerant and doesn’t mind hot days or cold days. And get this, the deer won’t eat it! On that chilly March evening when I clicked the buy button, it seemed like a brilliant plan.

While I have a lot of experience and knowledge about native plants, I have never grown cactus. The learning curve started as soon as I opened the box and immediately felt little barbs digging into my hands. I couldn’t see the needles, but they were there. I tried washing them off. I tried plucking them out. They stayed. Then I touched my face and landed a few in my forehead.

They were there for at least a day. My daughter had a meltdown a couple of days later when she got one in her hand and another in her foot. I touched a doorknob that seemed coated with them. This was becoming a bad plan.

Since it’s difficult to get a cactus expert to answer an email during a holiday week, I turned to my Master Gardener volunteer network. My chief concern was having these invisible needles blowing around my yard for eternity. With a child and dog, I couldn’t even foresee a feasible location to plant it where someone wouldn’t get mad at me.

Gardeners who have it in their yards said they started with plants, not the mail-order pads I received, and didn’t have issues with the invisible darts. The hypothesis is that shipping had stressed the plant and it was shedding needles. Keeping it in the house and opening the box without gloves, touching the paper wrapping — all cactus-novice mistakes.

A gardener who works at Teatown Lake Reservation was reassuring. She planted Eastern prickly pear cactus in a rock garden there. The turtles love it. When pads are pulled off, a colleague uses a lighter to burn off the invisible needles and the turtles get a snack.

I thought if it could be trusted in a public garden, surely my family and hound would be safe outdoors. Sort of. It’s behind a fence.

Here are other tips I received:

After learning all this, I’m inclined to plant it. I’m not even sure how to get rid of it now — it certainly isn’t going in the compost pile. If you see it come up as a giveaway on social media, learn from my mistakes.