On Saturday (May 29), Håkan Mårtensson opened Håkan Chocolatier at 462 Main St. in Beacon. 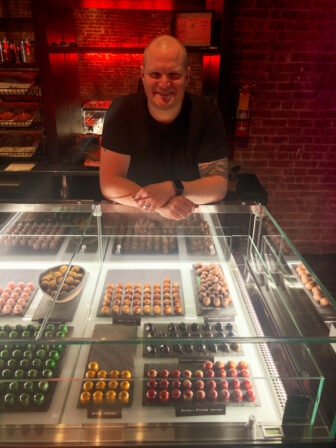 You were a member of the Swedish National Culinary Team. How did they recruit you?

I was only 22 when my mentor recommended me for the team. Competing for the Swedish National Culinary Team is like competing for Brazil in soccer. I called home and told my mom, “Don’t tell anyone about this because when they realize what a fraud I am, they’re going to kick me off.” To compete at that level, you have to step up. Six months later, we tested a Christmas ham recipe for a magazine article and it was only then that everyone learned I was on the team.

It’s the fourth kind of chocolate, after dark, milk and white. Ruby is a naturally red cocoa fruit. It’s almost like milk chocolate, but it has much fruitier notes, which makes it taste a little darker. I add spices to it: chili and chopped-up fruits, since it already has some berry notes. It can probably go with other things I haven’t thought of yet. That’s the flavor profile I have in my head, so that’s what I think fits, but sometimes you’re completely wrong.

When creating a bonbon, how do you pick which shape goes with what flavor?

With some shapes, you have to think about how the bonbon will be filled. For example, this salted caramel one is round, which means it has a smaller opening, because the filling is very fluid. If you have too much of an opening, it’s going to leak when you’re sealing it. With this Key lime pie one, you want a higher shape because the filling has layers, so it’s a diamond shape. Also, because it’s Key lime pie and I love Key West, it’s the diamond of Florida. This one, it’s cinnamon and Tabasco in a thin, dark shell. Tabasco is the only hot sauce that doesn’t activate in your mouth, so you’re slowly going to feel it in your throat while the cinnamon lingers in your mouth. It’s not going to get too hot, and a few minutes later the heat is gone. A hot sauce bonbon doesn’t sound good, but if you balance it, it’s tasty.

How would you translate the Swedish neon sign in your store?

It’s from a Swedish song from 1949 that’s always in my head. It means “Clap to the rhythm, all you baker’s kids.” We’re all children of bakers. Around the corner I have another sign with the next line of the song, which means “Bun feast, bun feast every day!” Yes, I’m making chocolates, but we’re also going to make a lot of buns, Swedish-inspired buns, not just because it’s what I know, but because it’s what I like. Cardamom buns, cinnamon buns, butter-and-vanilla buns. That’s not something you can find in Beacon and it could be a nice addition to all the doughnuts and bagels.

The more I learn about chocolate, the more I realize I don’t know enough about chocolate, not just in terms of texture and flavor, but how to grow cocoa. I’m going back to the farmers. I visited Ghana to try and understand it. Now that I’m in the Hudson Valley, I’d like to learn more about the cream, the butter, the milk. Before, I took it for granted that I had access to the best cream and butter. But what makes it so good? If I can get it down to a point, I can formulate my chocolates to taste better.